Lars Eklund on networking tour to Stockholm and Örebro, September 2015

During four days in late September 2015, SASNET deputy director Lars Eklund made a networking tour to Stockholm and Örebro.
His main mission was to meet the participants attending the Young Connectors of the Future (YCF) programme arranged by the Swedish Institute (SI) for the third year in a row. 29 dynamic young individuals from Afghanistan, Bangladesh, India and Pakistan  – 8 from India, 9 from Pakistan and six each from Bangladesh and Afghanistan, had been selected for the programme. Lars was partly involved in the planning.
Besides, Lars was invited to meet the Rector for the University College of Music Education in Stockholm (SMI) and its collaborating partners from Bangladesh representing the Bangladesh Shilpakala Academy (BSA) and the Government Music College (GMC), at the time visiting Sockholm to discuss their ongoing Linnaeus Palme programme.
Finally, Lars attended one day of a 3-day international conference entitled ”Virtual Learning Sites as Languaging Spaces”(ViLS-2), hosted by the School of Humanities, Education and Social Sciences (HumEs) at Örebro University, mainly in order to meet the convener, Professor Sangeeta Bagga-Gupta, and three Indian professors – Biswajit Das from Jamia Milia in Delhi, Panchanan Mohanty from Hyderabad University and Mathew Martin from AAJNIHH and Mumbai University – participating in the conference.

Young Connectors of the Future (YCF)

YCF is an intercultural leadership programme initiated by the Swedish Institute. It that aims to lay a foundation for dialogue and knowledge sharing among young leaders from South Asia. The programme manager at SI is Ulrika Rosvall. The aim is to train young leaders, promising professionals, social workers and entrepreneurs aged between 22 and 32 years of age from South Asia, and to provide the participants with new skills, broadened networks and innovative tools to strengthen their work to drive social change in their respective contexts. The participants represent different sectors of society and are visionaries in positions to make a difference.

The YCF programme also offers a unique opportunity for young leaders in the region to gather and share ideas and perspectives on common challenges. During and after YCF, participants will be part of an active network that aims to boost creativity and to support their personal and professional development, while also laying the platform for a more connected future. The participants are actively working for democracy and human rights within the spheres of society, culture, politics, entrepreneurship and media. More information about the YCF programme.

The programme comprises of 3.5 weeks of intensive work divided into two modules: The first one has been held 8 September – 25 September 2015 in Stockholm, and consisted of seminars and workshops, and experience-based intercultural leadership training and personal as well as group development. This has been combined with tailor-made study visits to relevant Swedish organisa­tions and institutions.
The second module will take place on February/March 2016 in Sweden or another location to continue the exchange and follow up the development of their work. The module will also include workshops and seminars with speakers and build on the sharing of the participants’ own experiences and knowledge.

Since Lars Eklund was involved in the planning of this year’s programme, he was invited to take part in the September 2015 activities, and he could therefore attend a highly interesting seminar on Freedom of Speech and Minorities in South Asia, that was held on Tuesday 22 September; and a concluding social gathering on Thursday 24 September.

Seminar on Freedom of Speech and Minorities in South Asia

The seminar was held in the morning of 22nd September at Swedish Institute’s Slottsbacken premises, next to the royal castle. After an introduction by the programme coordinator Ulrika Rosvall, the moderator for the day, Ulrika K Engström, introduced a panel consisting of four of the programme participants – Danial Shah from Pakistan, Nafiza Alizada from Afghanistan, Priyanka Kanta Bose from Bangladesh and Yusra Husain from India, plus two invited Swedish guests, namely Ola Larsmo from Swedish PEN, and doumentary film maker Lawen Mohtadi.
Ola Larsmo started the discussion by presenting the Press Freedom Index – the annual ranking of countries compiled and published by Reporters Without Borders. The panel representatives then gave their personal views on the status of freedom of speech in their repective countries, and were joined in the discussion by the other 25 or so programme participants.
This was followed by screening a part of a new film by Lawen Mohtadi about Katarina Taikon, who struggled for Roma (gipsy) human rights in the Swedish society during the 1960s. The intention was to lllustrate the fact that Sweden so recently had similar problems to handle minority issues as are to be found in South Asia of today. Several of the programme participants come from minority groups themselves, and this resulted in an interesting and animated discussion on the issues in focus for the day. 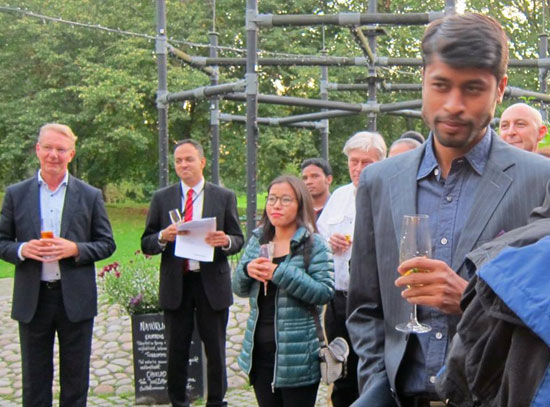 A few days later, on Thursday 24 September, the Swedish Institute programme came to a final for its first module, with a closing event at the Museum of Ethnography in Stockholm. Besides the participants SI had invited also all the people who have been part of the plannng process and the selection of particpants – including Lars Eklund and other academic representatives, as well as officials from the Ministry of Foreign Affairs and other agencies. The evening offered an excellent opportunity for networking with the participants, representing a vast field of activism and social work back home in South Asia. Just a few examples:

– Abdul Ghafoor from Afghanistan works with providing advice to potential migrants and assisting returnees to the country;
– Nafiza Alizada also from Afghanistan but of Hazara ethnicity, now studying at Asian University for Women (AUW) in Chittagong, Bangladesh;
– Priyanka Kanta Bose from Bangladesh who is a social activist and lawyer working for the rights of the country’s religious minorites;

The event was an excellent opportunity to network also with the Swedish networking partners present, among them Prof. Prosun Bhattacharya from the Department of Land and Water Resources Engineering at KTH Royal Institute of Technology – former member of SASNET’s board; Dr. Patrik Oskarsson, Dept. of Urban and Rural Development, Swedish University of Agricultural Sciences, Uppsala (but till recently connected to School of Global Studies, University of Gothenburg); Gautam Bhattacharya from the Swedish Ministry for Foreign Affairs; Robin Sukhia from Sweden-India Business Council (SIBC); Parul Sharma, Rektor, Swedish Academy for Human Rights in Business; journalist Börje Almquist; and many others.

On Tuesday 22 September, Lars was invited to meet Ian Plaude, Rector for SMI and a delegation from Bangladesh consisting of collaboration partners in  an ongoing Linnaeus Palme exchange programme (LP). It is based on a 2012 initative by three Swedish musicians connected to SMI connecting with organizations in Dhaka working to promote musical skills, knowledge and excellence – including the Bangladesh Shilpakala Academy (BSA) and the Government Music College (GMC) in Dhaka – part of the National University of Bangladesh. These organizations are working together to achieve a milestone in the establishment of ”classical and contemporary” (composed) music, incorporating western and eastern traditions and instruments – a vision to form Bangladesh’s first symphony orchestra.
Since 2014, SMI has a LP programmme funded by the Swedish International Programme Office for Education and Training, wih an aim to launch collaborative exchange of teachers and students. It is now running, but with some obstacles and that was the main reason for inviting SASNET to meet Liaquat Ali Lucky, BSA General Secretary, and Shameema Parveen, GMC Rector. Also attending the meeting was Swani Zubayeer, a freelance composer and musician who has previously studied at the Royal College of Music in Stockholm, 1999-2006.

Ian Plaude had also invited Michael Schlyter, a teacher at SMI working part-time there, but also teaching at the Royal College of Music and a Stockholm high school. His work situation illustrates the problem for SMI and other university departments in the field of performing arts to run a Linnaeus Palme programme. The idea is to send teachers to teach at the collaborating institution in for example Bangladesh, but for a part time employee this is not easy since he/she then has to take unpaid leave from his/her other work places.
The Stockholm visit by the Bangladeshis was a follow-up visit to  a tour made by Plaude and Schlyter to Dhaka in June 2015, when they visited several higher institutions of music. Read their  Dhaka report.
The discussion did not result in any good suggestions to solve this problem, but instead Lars learnt a lot about the work of SMI – which is mainly to educate Swedish music teachers, and get good contact with two important institutions of music in Bangladesh. The Bangladesh Shilpakala Academy has impressive activities going on in all parts of the country, that is in every district and almost every sub-district.

The School of Humanities, Education and Social Sciences (HumEs) at Örebro University hosted an international conference entitled ”Virtual Learning Sites as Languaging Spaces” (ViLS-2) on 22–24 September 2015. The conference was being organized by the research group CCD, (Communication, Culture & Diversity) at HumES, within the framework of project CINLE (Communication and Identity processes in Netbased Learning Environments). The conference was being chaired by Professor Sangeeta Bagga-Gupta.

Lars Eklund decided to attend this conference on behalf of SASNET in order both to get an opportunity to meet Prof. Bagga-Gupta, who is an important networking partner when it comes to South Asia related research in Sweden, and also meet Professor Biswajit Das (photo) from Jamia Milla Islamia University in New Delhi. Biswajit Das is also involved in the upcoming Sweden-South Asia Media workshops that SASNET will organise in Lund and Delhi during the fall 2015 (more information).

The main objective of the ViLS-2 international conference was to establish a forum for dialogue on the study of interaction, learning and identity formation in virtual environments. It included presentations by invited plenary speakers as well as provided opportunities for panel discussions led by internationally acclaimed researchers.  Full information about the conference 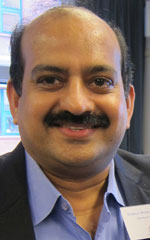 Prof. Das spoke about ”Virtual Learning sites in a cross-cultural context Experiences from global South”, but he was not the only Indian participant. Professor Panchanan Mohanty from University of Hyderabad had also been invited to speak about ”Home and school, language issues and the virtual: language learning spaces in multilingual India”, and finally Dr. Mathew Martin (photo to the left) from AYJ National Institute for the Hearing Handicapped in Mumbai and adjunct professor at Mumbai University spoke about ”Social Media Networks Among Persons with Disabilities and Demographic Outcomes in the Virtual Learning Spaces”. Dr. Martin is attached to the Communication, Culture & Diversity research group at Örebro University for two months.

Sangeeta Bagga-Gupta had only recently become aware of the existence of SASNET (with information coming from Teddy Primack, Director of Academic Documents Associates, USA), and is keen on establishing and developing links. It should be mentioned that Prof. Bagga-Gupta besides being Professor at Örebro University and involved in a number of India related projects, is also Visiting professor at the School of Learning and Communication, Jönköping University. She will be Visiting Professor at Aligarh University in India for a period of two years from 1 January 2016.
Biswajit Das and Panchanan Mohanty equally shares the interest to connect to SASNET, and they became upset and shocked to hear that SASNET in its present avatar may actually be closed down or be amalgamated into some other institution at Lund University in a year from now.
In haste, a breakfast meeting was therefore held at First Hotel in Örebro in the early morning of Thursday 24 September, before Lars had to return by train to Stockholm. Sangeeta Bagga-Gupta, Panchanan Mohanty and Biswajit Das discussed the possibility to bring SASNET into the planning of a joint conference, tentatively focusing on Language, Culture and Communication, to be held in New Delhi in early 2017. Biswajit and Mohanty will be the local hosts to take care of internal logistics of the conference and hosting the participants during the programme in India, whereas regarding foreign participants, the need to explore funders and collective proposals, these things should be explored by Lars/SASNET and Sangeeta. More information will follow. 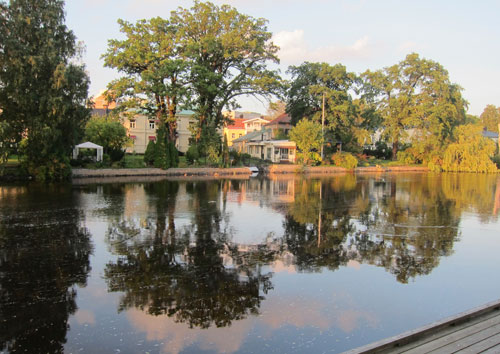