Contact person: Professor in Gender Studies Sangeeta Bagga-Gupta, phone: +46 (0)19-303589. Personal web page.
Prof. Bagga-Gupta is part of the Research Group on Communication, Culture & Diversity (CCD) within HumES (more information on the CCD web page).
She is also Visiting professor at the School of Learning and Communication, Jönköping University, and from 1 January 2016, she will be Visiting Professor at Aligarh University in India for a period of two years.

As Professor at Örebro University, Sangeeta Bagga-Gupta is involved in a number of research projects, that are to some extent South Asia related. The projects include LanDpost (Languaging and Diversity in the age of postcolonial glocal medialization), REID (Revisiting Identity Embodied Communication across time and space), CIC (Categorization, Identity and Communication), GTGS(Gender Talk and Gender Spaces), and LISA-21 (Languages and Identities in School Arenas in the 21st century).

Gender Talk and Gender Spaces is an anthropologically framed research project running through 2012-2015, focusing on institutional practices and developmental trajectories over time and space. The ethnographic fieldwork juxtaposes data created as a result of extensive fieldwork at an NGO in Asia – Mobile Creches (MC) in India – in the early 1990’s with data that is currently being generated at the same NGO (MMC, Mumbai Mobile Creches) during 2012-15. The overarching aim of GTGS is creating knowledge about issues related to human and societal development and communication through the lens of institutional practices. An important interest has been to understand the sociocultural pathways of sustainable development via analysis of shifts in, and the role and usage of discursive-technological tools (language varieties, including literacies, new media, etc) by organizations in the everyday practices that frame the delivery of a range of services in complex urban settings (both in Southern contexts like India but also in the North (eg. Sweden). Full information about the CTGS research project. 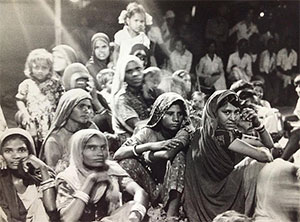 Mobile Creches has been a pioneering organisation working for the right to Early Childhood Development for marginalized children in India. Its work spans from grassroot level interventions to policy advocacy at the national level. Established in 1969 in response to the observed absence of critical childcare services for children of migrant construction workers, MC has now grown into an organisation that stands at the forefront of advocacy, research, training and practice for early childhood care and development (ECCD) in India. Its activies include interventions by MC for young children in slum settlements; networking with rights based NGOs, academia and government; and  working with local communities, especially women’s groups, around the issue of unpaid care work and universal access maternity support and childcare. More information about MC.
The Mumbai Mobile Creches, has ben working since 1972, specifically supporting the health, education and safety of children of construction labourers, and has reached over 100,000 children across 270 construction sites in Mumbai, Navi Mumbai and Thane. It is led by Mrinalini Kochar since 20 years. More information about MMC.

Professor Sangeeta Bagga-Gupta is involved in a collaboration with Kishinchand Chellaram College – affiliated to the University of Mumbai. The contact person there is Dr. Manjula Srinivas. KCC has a management which runs nineteen institutions in Mumbai – HSNC (Hyderabad Sind National Collegiate Board). These are institutions specializing in Humanities, Education, Technology, Pharmacy, Pure Sciences, Management and Media.

The School of Humanities, Education and Social Sciences hosted a 3-day international conference entitled ”Virtual Learning Sites as Languaging Spaces” (ViLS-2) on 22–24 September 2015. The conference was being organized by the research group CCD, within the framework of project CINLE (Communication and Identity processes in Netbased Learning Environments). It was being chaired by Sangeeta Bagga-Gupta.
The main objective of the ViLS-2 international conference was to establish a forum for dialogue on the study of interaction, learning and identity formation in virtual environments. The themes and issues raised at the first ViLS conference two years ago were re-focused again, this time with special attention on the languaging and construction of time and space in virtual sites. The 2015 ViLS-2 conference included presentations by invited plenary speakers as well as provide opportunities for panel discussions led by internationally acclaimed researchers in the conference areas of interest.

SASNET deputy director Lars attended one day of the conference, mainly in order to meet the convener, Professor Sangeeta Bagga-Gupta, and three Indian professors – Biswajit Das from Jamia Millia in Delhi, Panchanan Mohanty from Hyderabad University and Mathew Martin from AAJNIHH and Mumbai University – participating in the conference. Read Lars report from the conference.

Anders Jonsson worked at the Dept. of Social and Political Sciences for many years. He lectured different courses in sociology and social psychology at Orebro University since 1976. His interest in India and hence eventually the concepts involved in Trans-cultural encounters be it academic research, personal experiences, or mundane and everyday life started as early as 1984. He has an ongoing project (”From Biography via Ethnography to the World of Trans-cultural Sociology…”) built on the research he has been doing, apart from lecturing and publishing many articles in newspapers and magazines over the years. He has also lectured at Jawaharlal Nehru University in Delhi, at S.N.D.T Women’s University in Mumbai, at Tata Institute of Social Sciences in Mumbai, and at S.N.D.T. Women’s University in Pune.
Earlier, he was the Swedish coordinator for the Sweden-India Project, based at Örebro University’s Socionomprogrammet/Social Work; Department of Behavioural, Social and Legal Sciences. This project was established as an Indian-Swedish educational project in 1994, and is still running. More information about the Sweden-India Project.

Anders Jonsson participated in the SASNET workshop on ”The role of South Asia in the internationalisation of higher education in Sweden” held in Stockholm 28-29 November 2006, where he gave a presentation about Örebro University’s India Programme in the session about ”Sending students to South Asia”. Read Anders Jonsson’s presentation at the workshop (as a pdf-file).

Later, Mr. Jonsson worked as a consultant, being involved in two new projects:
1. A course in the Sociology of Religion, specialising in Hinduism as well as Islam, at Örebro University.
2. Writing a text-book about general Hinduism in India and general Islam in Bangladesh.