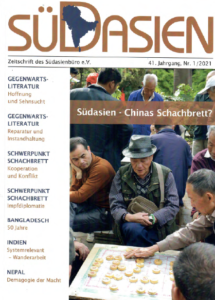 In its 2021 No.1 issue, the eminent German magazine SÜDASIEN publisheds an article on the History of SASNET, written by me (Lars Eklund), but translated into German language. The title is ”SASNET auf Abwegen. Bilanz eines schwedischen Südasien-Netzwerks” (SASNET gone astray. A balance sheet of a Swedish South Asia network).
Go for the article.
In the previous issue of SÜDASIEN, No. 4/2020, a presentation of the Swedish magazine SYDASIEN was given by the editors Johan Mikaelsson and Henrik Schedin. The magazine for which I was the editor in chief during the period 1982 til 2007 is now again a vibrant print magazine. Go for the text. 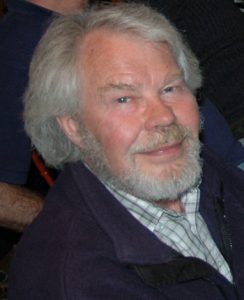 It came as a shock, when it was announced that my best friend Professor Emeritus Staffan Lindberg had passed away on Monday, January 7, 2019. Staffan, who has been one of the foremost India experts in Sweden and also a well-known name among social science researchers in South Asia, had recently returned from a conference in Bangalore along with his wife Karin.
For some time he was somewhat sickly, so he was hospitalized in the home town of Lund for observation. There he suffered from cardiac arrest and attempts to resuscitate failed. An appalling ending to Staffan’s life, which for over 50 years was characterized by India-related studies, research and teaching. He died far too early, 75 years old.
I myself have worked with Staffan for 40 years, first with the journal SYDASIEN – which Staffan was one of the initiators of 1976, then with the academic network SASNET (Swedish South Asian Studies Network) which Staffan led from the start in 2001, and during the last two years, Staffan and I have worked with “Miracle India and its backside”, a book that was published as late as spring 2018. Read more… 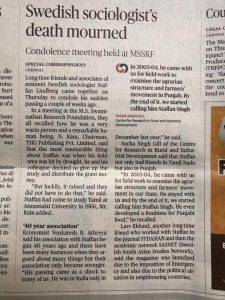 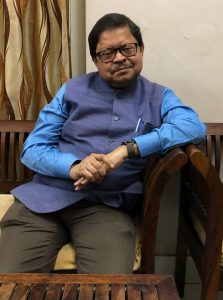 On Tuesday 29 January 2019 Lars and Bubu met Sabyasachi Basu Ray Chaudhuri, Vice Chancellor at Rabindra Bharati University. In Januari 2018, Lars arranged for a seminar at RBU for Lars Gerdmar on Iconic Art at the university’s BT Road campus, now we met at the original Jorasanko downtown campus, where Bubu once studied Music.  Sabyasachhi had a wish to meet both me and Bubu and invited us to see the daily sound and light show outdoors the old Tagore family palace. The excellent show started at sunset after 17.45, but till then we were sitting in the VC’s office drinking tea from clay mugs and I was updated on the latest news regarding the university. Most interesting is the fact that a new campus will open in New Town. 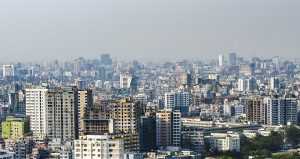 Once dubbed a ‘basket case’ and struggling with mass starvation, poor infrastructure, gender disparity, political turmoil, and aid dependency, Bangladesh has over the past 45 years made remarkable progress.  Changes are visible in all spheres of life, including culture, society and politics. And yet the country still faces significant challenges, including continued inequality, climate change, rising authoritarianism, and corruption. Set against this backdrop, this workshop is set to examine changing Bangladesh from different humanities and social science perspectives. We welcome papers on topics broadly relevant to this theme. The workshop will take place on the 13 and 14 June 2019. More information… 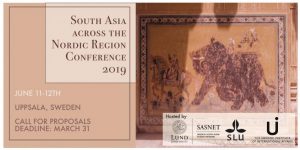 SANR is an annual conference about all things South Asian. It offers a platform for Nordic scholars of South Asia to present their research and meet other researchers. It is particularly intended to be a supportive meeting point for emerging scholars. After initial meetings in Copenhagen in 2017 and Oslo in 2018, Uppsala will be the host in 2019 with the event taking place June 11-12 at the Swedish University of Agricultural Sciences. Event funding is shared between Sasnet/Lund University, the Swedish Institute of International Affairs (UI), Stockholm, and the Swedish University of Agricultural Sciences (SLU) in Uppsala. Read more…
At the 2018 meeting in Oslo, a resolution was accnowledged regarding the NSAN editor Lars Eklund. “Through his engagement in Sydasien, SASNET, the Nordic South Asia Newsletter Newsletter, and in many other ways, Lars Eklund has encouraged and sustained South Asia connections for many years.  South Asia Across the Nordic Region hereby recognizes this engagement and our gratitude for his commitment”.