Report from 2015 visit to Swedish Embassy in Dhaka, Bangladesh

SASNET deputy director Lars Eklund visited Dhaka 20-24 February 2015 with the prime intention to visit Dhaka University and a number of other universities (see separate report), but also to visit the Swedish Embassy in town and to connect to the people working there. A meeting was kindly organised by Olof Sandkull, First Secretary/Development Analyst at the Embassy, on Sunday 22 February – the first working day of the week in this Muslim-majority country.

After strict security requirements entering the compound that houses both the Swedish and the Danish embassies, and then choosing the left entrance for the Swedish mission, the visitor meets no dfferent atmosphere than to be experienced at any office in Sweden. A conference room was prepared for what was supposed to be an informal meeting with Olof Sandkull and the Swedish Ambassador Johan Frisell, new on the post since 2014. However, there was a genuine interest from also other staff members to learn about SASNET and discuss possible fields of collaboration, so it turned out to be a great chance for Lars to meet most of the Swedish staff at the embassy at one time.

Besides Johan Frisell and Olof Sandkull, the meeting was therefore also attended by Ylva Sörman Nath, Counsellor, and  Deputy Head in charge of Development Co-operation; Karin McDonald, Counsellor/Deputy Head of Mission, besides being the Head of Development Cooperation; Mia Hallén, First Secretary in charge of Political and Commercial Affairs; Magnus André, Second Secretary of Development Cooperation; Maja Edfast, Second Secretary in charge of Democracy, Human Rights and Gender Equality (with a PhD from KTH Royal Institute of Technology); and finally a temporary visitor from the Swedish Foreign Office in Stockholm, Mari Albihn, Head of Environment and Sustainable Growth at SIDA. 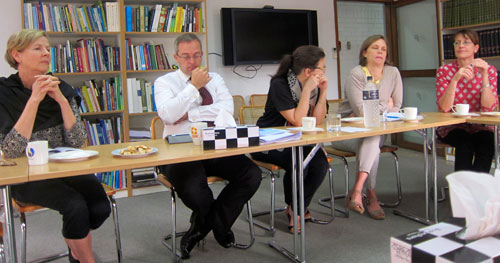 Most of them were well aquainted with SASNET since years back especially as keen readers of our newsletters, and Karin McDonald met with then SASNET director Prof. Staffan Lindberg while she was working at the Swedish Embassy in Delhi in 2004. Ylva Sörman Nath is the seniormost staff member, she has served at the Dhaka mission since 2010. 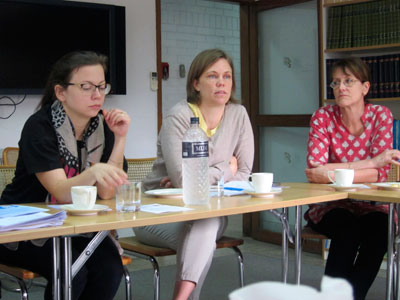 Karin McDonald introduced the plan and then Mia Hallén, Olof Sandkull and Ylva Sörman Nath made complimentary presentations on the main areas that Swedish-Bangladeshi collaboration currenty focuses upon. It should be mentioned that Bangladesh has been a prioritized country for Swedish development cooperation since shortly after the country’s independence in 1971. Sweden has contributed a total of 10 billion SEK to Bangladesh.
Bangladesh has made great strides to improve the situation for its poor since then, but the strategy plan says that much remains to be done, as more than half of the population still lives in poverty. The long term goals of Sida’s work in Bangladesh is therefore to give people better opportunities to lift themselves out of poverty, and to contribute to the strengthening of democracy, the respect for human rights and gender equality, and to sustainable development. Read the full text of the strategy plan.
The 2014-2020 strategy encompasses a total of 1.6 billion SEK and is expected to contribute to the following four targets:

Lars then presented SASNET and its information on Bangladesh related research in Sweden and ongoing academic collaboration projects. SASNET has identified nearly 50 Swedish university departments at 20 universities engaged in such activites. The majority of the departments are in the fields of Medicine and Technology, and to a large part the research carried out falls well within the orbit of the prioritized areas of the strategy plan. Major projects are done on Public Health, and Womens and Childrens Health by researchers at Karolinska Institutet, University of Gothenburg, Uppsala University, Lund University, Umeå University, Örebro University and others; and projects connected to the problems with Arsenic in groundwater, research especially being done at KTH Royal Institute of Technology, Skövde University and Karolinska Institutet. Go for SASNET’s list of 300 departments involved in South Asia related research.
Other important collaboration projects include the International Science Programme (ISP) at Uppsala University, that has for decades supported the institutional building up of strong research environments within the fields of Chemistry and Physics at Bangladeshi universities. And finally should be mentioned the Swedish long-standing institutional support to the International Centre for Diarrhoeal Disease Research, Bangladesh in Dhaka, an institution more commonly only referred to with its acronym ICDDR,B. Several Swedish departments are collaborating with this world class centre. More information.

How to attract masters students

Lars also discussed with the embassy staff the issue of student exchange, and espeacially means to promote Bangladeshi masters students to get an opportunity to study in Sweden. With fees for non-European students introduced by the Swedish government  few years back the number of such students dropped, even though a special quota for Bangladeshi students introduced by the Swedish Institute has partly releived the situation. We discussed different forms of collaboration agreements such as offered through the Linnaeus Palme programme, the now closed down Erasmus Mundus Action 2 programmes and formal MoUs on university or department level.

Finally, Lars was informed about the internships offered at the Swedish Embassy every year to two students at a time. These positions are announced, and from now on information will also appear via SASNET. During the spring semester 2015, two students studying at the Law Programme, one from Stockholm and one from Uppsala, are based at the Embassy in Dhaka. Lars got a chance to meet one of them, Nina Tranberg (photo to the left) from Stockholm University, whereas Malin Rådström from Uppsala University was absent.
Read a report by a former intern at the Embassy, Neaz Qadery from the Dept. of Political Science, Stockholm University who worked at the Embassy in the spring 2012.

While in Dhaka, Lars and his wife Bubu Munshi Eklund were acommodated with Ylva Sörman Nath from the Embassy and her husband Ashok Nath (photos to the right), at the time being a visiting senior research fellow at Bangladesh Institute of Peace and Security Studies (BIPSS), a leading Dhaka based institution in Bangladesh for informed analysis on all aspects of broad spectrum of peace and security studies in the region and beyond.
In Sweden Indo-Swedish historian and researcher Ashok Nath is connected to the Dept. of History at Stockholm University. In the end of 2014, he completed his most recent book on Indian military history: Sowars and Sepoys in the Great War 1914-1918. The book is a significant contribution on India and the First World War. Nath’s main focus of research is South Asian conflict history and military cultures, and he is considered the most eminent scholar of the Indian Army during the Company and Raj period (1600­ -1947) and an internationally renowned authority on South Asian regimental iconography. More information about Ashok Nath and his research.
A dinner party was arranged at the Nath residence on 21 February 2015 and among the guests Lars was happy to meet Roshni Kapoor, former Lund University masters student in Public Health at the Division of Social Medicine and Public Health in Malmö. Roshni is now working for UN Women Bangladesh Country Office in Dhaka.
Other academic dinner guests were Shafqat Munir, Associate Research Fellow at BIPSS, a colleague of Ashok; and Waqar Khan, Chairman for Bangladesh Forum for Heritage. They were entertained not only with delicious food but also by a rabindrasangheet performance by Bubu Munshi Eklund, and at some points also with added song force by husband Lars.