Lars visit to universities in Bengal and Odisha, October-November 2013 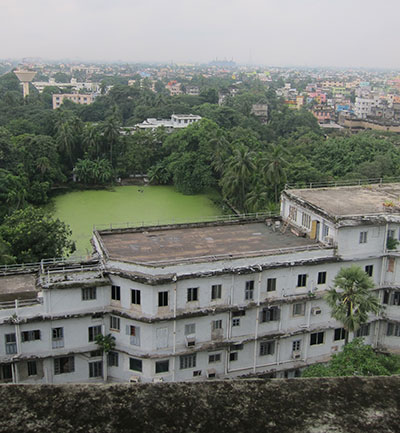 On Friday 25th October 2013, SASNET deputy director Lars Eklund made an official visit to the Indian Statistical Institute (ISI) at BT Road in northernmost Kolkata. He was accompanied by Lena Andersson, Lecturer at the School of Teaching at Malmö University, Sweden, and Mr. Henrik Celander, books publisher from Lund.
ISI a unique institution funded by the central government, devoted to the research, teaching and application of statistics, natural sciences and social sciences. It was founded in 1931 by the legendary Professor P.C. Mahalanobis, and the institute gained the status of an Institution of National Importance by an act of the Indian Parliament in 1959. The Headquarters of ISI is located in Kolkata, but additionally there are four centres located in Delhi, Bangalore, Chennai and Tezpur. 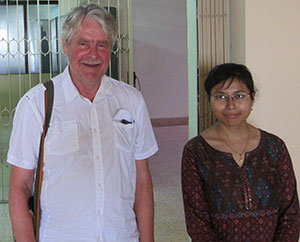 The invitation to visit ISI came from Dr. Sushmita Ruj, Assistant Professor in the Cryptology Research Group.
She spent a full year in 2009/10 as an Erasmus Mundus Post Doctoral Fellow at Lund University working with Prof. Thomas Johansson at the Department of Electrical and Information Technology (EIT), Faculty of Engineering (LTH). Sushmita, originally hailing from Durgapur Steel City, defended her PhD at ISI in 2009 on a thesis about applications of combinatorial designs to key predistribution. After two years of post-doc work in Canada 2010-12, at University of Ottawa, she returned to Kolkata and joined ISI in May 2013. Her primary interests are in applied security, privacy, combinatorics and cryptography. 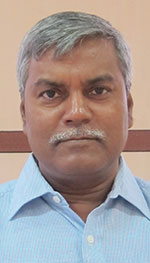 After a walk around the main campus, a meeting was arranged for Lars to meet the ISI Director, Professor Bimal Kumar Roy (photo to the right) in his spacious office. Prof. Roy who is also General Secretary of the Cryptology Research Society of India, and a member of the Scientific Council for the Indo French Centre for the Promotion of Advanced Research.
Prof. Roy enthusaistically informed about the many international collaboration projects ISI has with foreign universitites, epecially with France.
During the period 2002-05, he was also personally involved in a collaboration with Thomas Johansson at EIT, Lund University, who even came to Kolkata for a period.

Two spectacular museums are found with the ISI Campus. First, the Geological Museum housing an almost complete fossil skeleton of a 47 feet long sauropod from the early Jurassic period (about 160 million years back). This fossil was discovered by ISI geologists during a 1958 exploration in the Pranahita-Godavari valleyin Andhra Pradesh. It was excavated during a subsequent expedition in 1960-61. The dinosaur has been christened Barapasaurus tagorei. The name is a coinage of Bara pa, which means ‘big leg’ in Hindi, saurus, which is a standard suffix in zoological names of lizard-like creatures, and Tagore. The discovery coincided with the birth centinery year of the poet Rabindranath Tagore, who was a well-wisher of ISI. More information.

Lars visited Shantiniketan with the Lund India Choir. Even though it was vacation time for the students, it was the week of Diwali/Kali Puja, the choir managed to hold an improvised crowded concert at Sangeet Bhawan, the music department of the university. With the kind permission by the Principal,

Professor Indrani Mukhopadhyay, all faculty and students were gathered to listen to the Swedish choir singing Rabindrasangheet in Bengali language. The response was great, and after the concert, the choir were interviewed by newspaper and TV news journalists, and an invitation to come back to Shantiniketan was extended.

In 2005, the ‘Lund Alumni Association in Kolkata’ was formed as an informal network of architects who had participated in Sida-funded training programmes at Lund University and attended courses in the Division of Housing Development and Management; Department of Architecture and Built Environment, led by Prof. Johnny Åstrand. Most of the members were associated with the Centre for Built Environment (CBE) and its long-time President, Professor Santosh Ghosh. When Lars Eklund and Staffan Lindberg visited Kolkata in 2005 on official SASNET tour, an alumni meeting was organised by Dr. Monica Khosla Bhargava at Tollygunge Club (more information).
Now a new meeting was organised, this time at Calcutta Cricket and Football Club (CCFC) in Ballygunge, and the entire Lund India Choir (some of the members on photos below) was invited along with Lars Eklund. 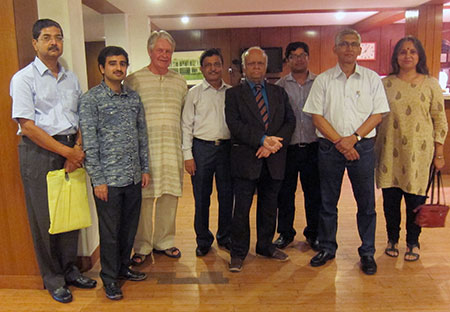 A meeting that naturally included a concert by the choir.The host for the evening was Dr. Partha Ranjan Das, another architect working in close collaboration with Prof. Santosh Ghosh. Other participants were Dr. Debasish Das, Assistant Professor at the Dept. of Architecture at Jadavpur University – and also among those who have attended courses in Lund; and Prabhas Chandra Kumar, former Associate Town Planner, working for the Govt. of West Bengal. Besides, Lars had taken the chance to invite two persons from Jadavpur University (JU) who have been involved in the Erasmus Mundus mobility programme coordinated by Lund University. First Professor Mridul Bose, former Erasmus Mundus contact person at JU and a frequent visitor to Lund; and secondly PhD Candidate Ritayan Chatterjee who recently returned to India to complete his PhD thesis after spending two years at the Division of Material Science, Lund University, and residing for a year at Lars Eklund’s residence. 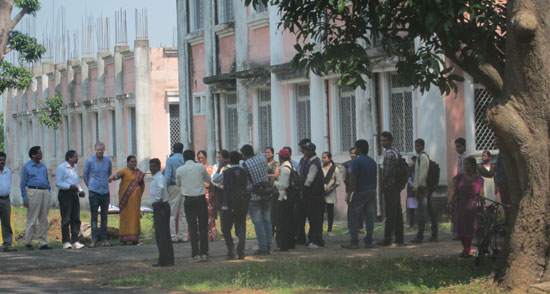 Arriving by car from Balasore in the morning of Saturday 2 November, Lars Eklund and his choir fellows, accompanied by Dr. Rabi Das, rheumatology specialist from Lund, and Professor Urban Rydholm from Malmö, were surprised at the warm welcome given them at North Orissa University (NOU) in Baripada. Large banners announced that an Erasmus Mundus Interaction Meeting  with European Unversities was being held 1–2 November, and other banners announced that a Free Health Camp was going to be held during the day by Shakuntala Rheumatology Hospital and Research Institute in Balasore, Rabi Dash’s new Indo-Swedish hospital.

We were greeted by a large welcome committee of students and professors led by Vice Chancellor Professor Sanghamitra Mohanty, and Lars was asked to cut the ribbon for the temporary Health Camp. 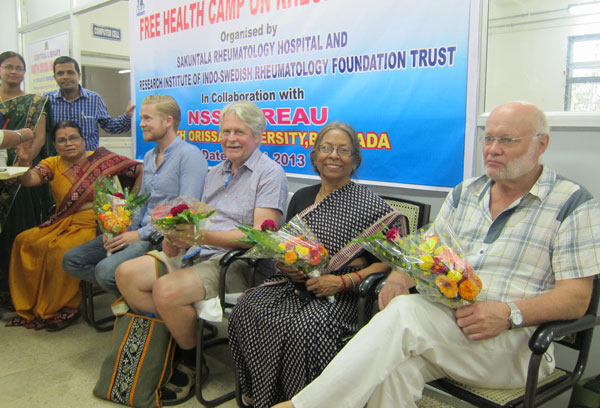 Then another big surprise appeared in the form of Mr. Niklas Nannskog, Erasmus Mundus coordinator for the new India lot coordinated by Lund University and in which NOU is a member (and SASNET is an associated partner).
Niklas was on a brief tour to visit three of the member universities in India – besides NOU he had already been to Kerala University and Gandhigram University in Dindigul, Tamil Nadu. NOU was his last stop before returning to Sweden, and he had actually spent the whole previous day in succesful meetings and information seminars at the university.

He had met with the Vice Chancellor Professor Mohanty, Professor Nigamananda Das and most of the other staff members. He had also held an information seminar for two and a half hours for the students that showed a great interest. 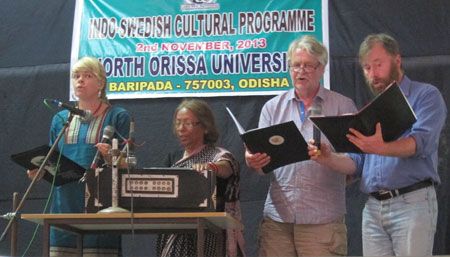 The second day of the Erasmus Mundus meeting, and the only day Lars participated, was devoted to culture. Prof. Mohanty had organised an Indo-Swedish cultural function in the auditorium after lunch, and the Lund India Choir was the  chief attraction, but several NOU students also took part, singing and dancing. A Chow dance perfomance was a highlight.
In the late afternoon the Swedish group returned by car to Balasore where they were accommodated. 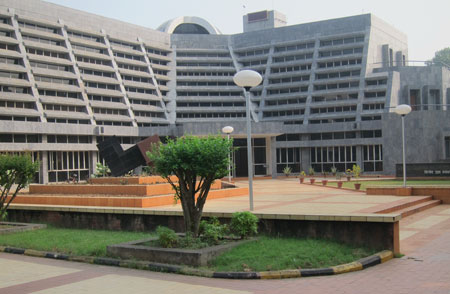 Our final destination outside Kolkata was Kharagpur, since the Lund India Chour received an invitation to visit and perform at the Indian Institute of Technology (IIT), the highest ranked technical university in India by Professor Souvik Bhattacharyya. Lars had met Prof. Bhattacharyya in November 2012 when he was the Vice Chancellor at Jadavpur University in Kolkata, and had a meeting discussing extended research collaboration between JU and Lund University (see report from the fruitful 2012 meeting).
However, in mid-September 2013, Souvik Bhattacharya, along with the Jadavpur University pro-vice chancellor and the registrar, was ghearoed (kept prisoner in his office) for 51 hours by students protesting against the VC suspending two students accused of ragging, sexual assault (photo below). Read more about the incident. 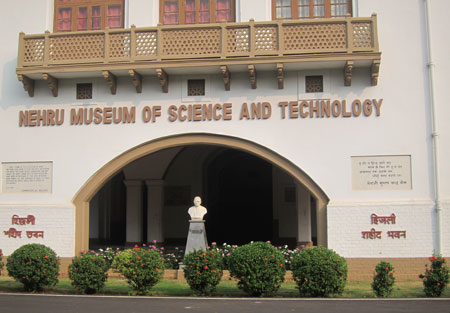 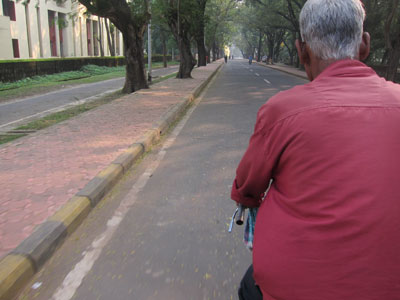 This traumatic action led to Prof. Bhattacharyya resigning from office in late October and returning to IIT Kharagpur, where he is a senior Professor of Mechanical Engineering – and newly appointed Deputy Director for IIT. When Lars contacted him via e-mail, Prof. Bhattacharyya imediately extended  an invitation for the choir to perform at IIT on its way from Balasore/Baripada, and a concert was booked for the evening of Monday 4 November.
The choir was put up at the excellent IIT guest house, and the concert was a grand success even though the number of students was small due to the fact that it was the day after the festive Kali Puja night.
Before continuing to Kolkata the next morning by Purulia-Howrah Express, Lars managed to make a round trip with cycle riksha to see the entire IIT campus, including the Nehru Museum.

Lars and Bubu also managed to meet their good old friend Professor Subrata Chattopadhyay, Head of the Dept. of Architecture, and his family who spent one year as a guest professor at Lund University in 2001, and also Anjali Gera Roy, Professor in the Department of Humanities of Social Sciences at IIT, whom they first met at the SASNET workshop on Urbanisation and Migration, held in Bangalore, March 2013 (more information).