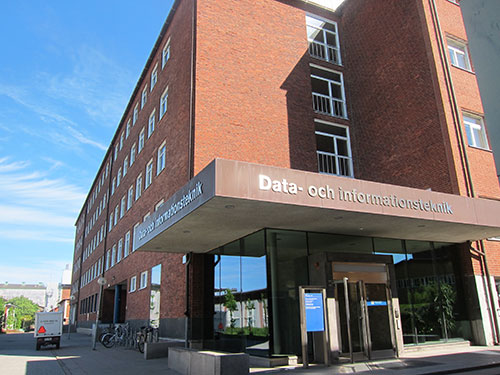 He first visited the Department of Computer Science and Engineering (CSE) and met Professor Devdatt Dubhashi.
CSE is actually jointly organised by Chalmers and University of Gothenburg. It is strongly international, with 70 faculty and 55 PhD students from 30 countries. The research spans the whole spectrum, from theoretical underpinnings to applied systems development. Industrial collaborators in Sweden include Volvo, as well as the many smaller IT companies associated with Chalmers. The department has also hosted several well-known international scholars as Chalesr Jubilee Professors, most recently Christoher L Barret from Virginia Tech, USA. 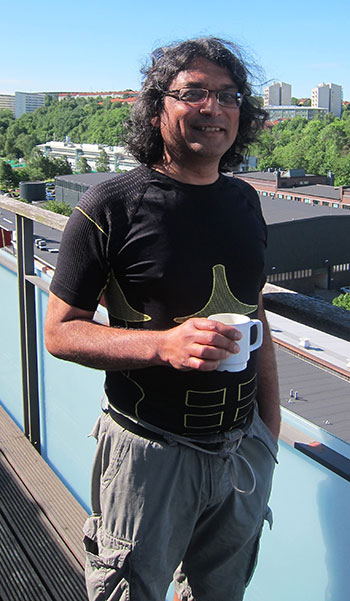 Professor Devdatt Dubhashi (on photo) and his colleague Associate Professor K. V. S. Prasad have both strong Indian connections since long time back, with an extensive network of contacts in major institutions, universities and industry research centres in India. They work mainly within the fields of – Algorithms for Information Networks; and – Language Technology. Another researcher who recently joined the department is Dr. Chien-Chung Huang, who has a long-term collaboration relationship with India, having visited it five times, giving talks. He has many active collaborations in India, especially with Associate Professor Kavitha Telikepalli at the School of Technology & Computer Science, Tata Institute of Fundamental Research (TIFR) in Mumbai.

Since 2007, the department collaborates on a major project related to Linguistics and Computation with the Indian Institute of Technology (IIT) in Mumbai. The person in charge at IIT Mumbai is Prof. Pushpak Bhattacharyya (photo) who spent a full year as Visiting Professor at Chalmers in 2011. The project involves several faculty members, PhD and Masters students at Chalmers as well as at IIT Bombay, and on Tuesday 4 June 2013 – a day before Lars’ visit – a workshop was held to discuss the results of the joint research project. Gérard Huet from INRIA Paris-Rocquencourt was one of the speakers, talking about ”Design of a lean interface for Sanskrit corpus annotation”.
The workshop also coincided with the public defence of PhD candidate Shafqat Mumtaz Virk, who defended his doctoral thesis entitled ”Computational Linguistics Resources for Indo-Iranian Languages” on 3 June 2013. In the thesis, Virk elucidates the development of computational grammars for six Indo-Iranian languages: Urdu, Hindi, Punjabi, Persian, Sindhi, and Nepali.

Lars proceeded to the Division of Physical Resource Theory, Department of Energy and Environment and met Dr. Eskil Mattsson, who recently moved to Chalmers after defending his PhD on an India related thesis at the Department of Earth Sciences, University of Gothenburg. He is not the only one at the division with the same background and sharing the same interest for South Asia related research, since it also houses Associate Professor Madelene Ostwald and Dr. Matilda Palm. The three of them are partners in a major research programme entitled ”Land use and forests within international climate policy – global and local possibilities and risks”, that includes field work in India and Sri Lanka. 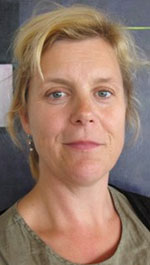 The programme, led by Madelene Ostwald (photo), is funded by the Swedish Energy Agency (STEM) with a grant of SEK 6.6 m for the period 2012-2014. It is a collaboration between the Division of Physical Resource Theory, and Centre for Environment and Sustainability(GMV) – also at Chalmers University of Technology ; the Environmental Economics Unit at University of Gothenburg; Centre for Climate Science and Policy Research (CSPR) at Linköping University; Indian Institute of Science (IISc) in Bangalore, India; Peradeniya University in Sri Lanka; and University of Life Science, Ås, Norway.
Eskil Mattsson’s post-doc research project entitled “The Use of Marginal and Degraded Lands and Multifunctional Land Use Strategies in Sri Lanka” is part of the major programme. The aim of the project is to investigate if the locally accepted land use system of ‘homegardens’ in Hambantota district  in southern part of Sri Lanka have the potential to serve several purposes: to mitigate the effects of climate change by sequestering carbon and to increase adaptation by extending and intensifying homegardens to low-productive and degraded lands for potential environmental benefits such as protection against natural hazards and increased income from higher productivity of the lands, food security and ecosystem services