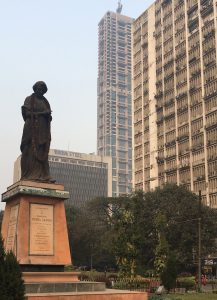 The Swedish South Asian Studies Network (SASNET) was launched in January 2001, after a competition between the universities of Uppsala, Gothenburg and Lund. Lund University was commissioned by the Swedish government through Sida to run a network for South Asia studies in Sweden, entirely based on a proposal prepared by Professor Staffan Lindberg. His idea was not to let the network mainly consist of a physical center formation in Lund, but instead to build on and develop the overall South Asian competence that already existed at the Swedish universities. His model won hearing. It turned out to be a very fruitful and an excellent idea, which Sida expanded into more similar academic networks in the following years.
In addition, Staffan’s model was based on the fact that the network would have a very limited amount of staff, and instead let up to half the budget go to finance planning grants for new South Asia-related education and research projects at all Swedish universities. Staffan was naturally given the role of director of the network, but his vision of realizing a national web-based network assumed a combination of academic and journalistic competence, and that was why Staffan made sure to enroll Lars Eklund as a webmaster and deputy director.
Read a memorial article by Lars on his colleague Staffan after he unfortunately passed away on 7 January 2019.

SASNET started in January 2001 and during the following years Staffan and Lars diligently went to the Swedish universities, met with researchers and administrators and thus built up an impressive database of in-depth information on South Asia-related research in all disciplines from medicine and technology to the humanities. and social sciences at all Swedish universities. And the possibility of applying for planning grants meant that SASNET became a popular institution throughout the country. The ambition to let the network reflect the country’s overall South Asia-related research and in the newsletters informing about interesting research at all Swedish universities was unique. In other countries, a university does not tell about news at competing universities, but in Sweden they did just that. The newsletters were internationally recognized. 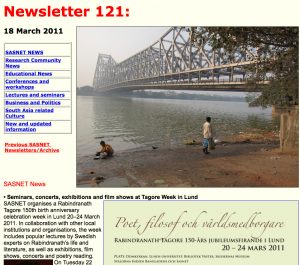 SASNET continued to be a national Swedish research and information network even after the SIDA funding ended in 2010 and Lund University became the only source of funding. However, with a change of LU leadership in 2015, demands were raised to convert SASNET to a research centre with a strong focus on Lund. The extensive web site was sadly closed down in 2016 and the popular newsletters as well.
Lars retired from SASNET, and afterwards he launched the Nordic South Asia Network (NSAN) on a private basis, an ambitious follow-up venture to the old SASNET web site and newsletter service.

The NSAN web site was sabotaged and infected by data virus in the summer 2018, and had to be deleted from the Net.
After some hesitation, Lars Eklund decided to again launch a NSAN web site. This new website is an effort to revive parts of the old web site. Luckily, much of the extensive original material was saved, including newsletters and travel reports. Go for the Saved Material.

Lars writes about the final years of his time with SASNET.

Lars was also editor-in-chief for the magazine SYDASIEN 1982  – 2007.
Go for the SYDASIEN magazine artikelregister 1977-2007 including pdf-files of all pages to download

Since 2014, Lars is also a member of the board for the Europan Association for South Asian Studies (EASAS).
It should also be mentioned that Lars has travelled extensively to most parts of Asia since the early 1970s, and has visited all the eight South Asian nations on SASNET contact missions. His extramural activities include lecturing on Indian society, history, culture and religion.