Home » LARS JOURNEY REPORTS » Lars visit to Jadavpur University and the Indian Association for the Cultivation of Science (IACS), March 2015

Lars visit to Jadavpur University and the Indian Association for the Cultivation of Science (IACS), March 2015

Whenever SASNET goes to Kolkata, a visit to Jadavpur University is a must. The reason is the formal collaboration agreements that connect Jadavpur to Swedish universities, including Lund University (LU) as a result of the SASNET contact journey to northeastern India, Bangladesh, Bhutan and Nepal in 2005. 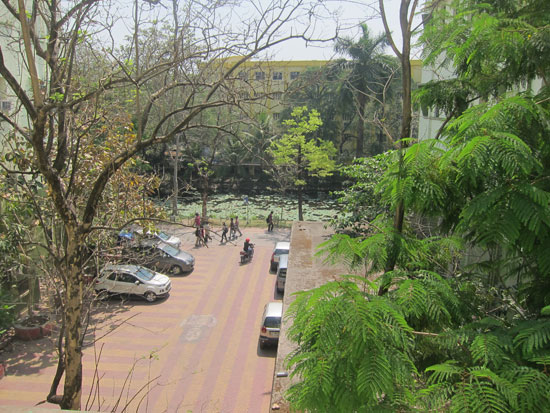 The contacts then established by Staffan Lindberg and Lars Eklund among other things paved the way for the inclusion of Jadavpur University in a successful European Commision funded Erasmus Mundus mobility programme coordinated by LU from 2008 onwards. Read a report from the 2005 SASNET visit to Jadavpur.
Lars has revisited Jadavpur a number of times since then. See for example his report from a visit in 2012, when he met the then dynamic Vice Chancellor Souvik Bhattacharya and a large number of Heads of departments.

The past two-three years have been rather turbulent with severe conflicts between the students and the management of the university, including the recentmost politically appointed Vice Chancellor who resigned only after a protracted campaign on 12 January 2015 (more information).
However, peace seems to have returned to Jadavpur and when Lars revisited Jadavpur in March 2015 the atmosphere at campus was back to normal at this university that proudly claims to be India’s premier state university, that is not being run by the central government in Delhi, but by the state government of West Bengal. 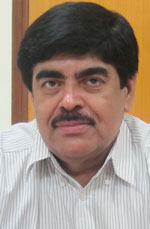 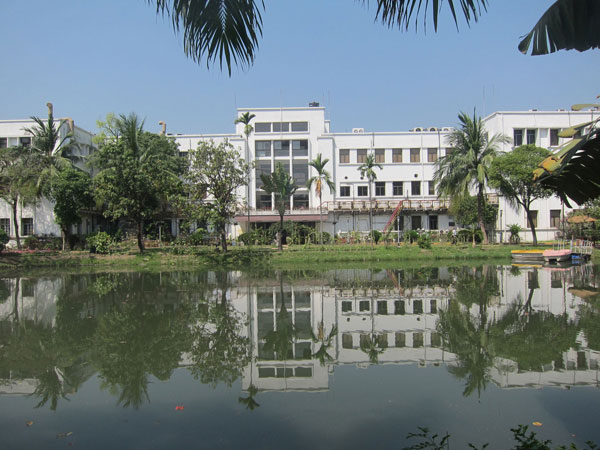 This time the visit to Jadavpur was limited to meeting the people who have been in charge of the Erasmus Mundus programme mentioned above,  Professor Samaresh Bhattacharya (photo to the left) at the Department of Chemistry and Associate Professor Mridul Bose at the Department of Physics; but also more important to visit the renowned Indian Association for the Cultivation of Science (IACS) research institute across the road from Jadavpur University.

In fact, Jadavpur University, located in the southern part of Kolkata is surrounded by a number of research institutes of high reputation. Among these, the IACS stands out being not only the oldest research institute in India but also one of its most renowned, of world class standard. It is an autonomous institute funded by the central government and devoted to the pursuit of fundamental  research in the frontier areas of  Physics, Chemistry, Biology, Energy, Polymer and Materials. In each field, IACS nurtures young and innovative research fellows in their doctoral programmes.

A total nmber of 400 researchers, including PhDs and Post-docs, work at IACS. In addition to this, the institute runs MSc. programmse (post-BSc. integrated PhD.) in various fields of Chemistry which include Organic Chemistry, Inorganic Chemistry, Physical Chemistry and Analytical Chemistry. The number of MSc. students is very limited though, with only 10 students every year because only topmost candidates get admission into this institute.
As such, there is no direct link of Jadavpur University with IACS only except the fact that the PhD candidates at IACS get registered under Jadavpur University. 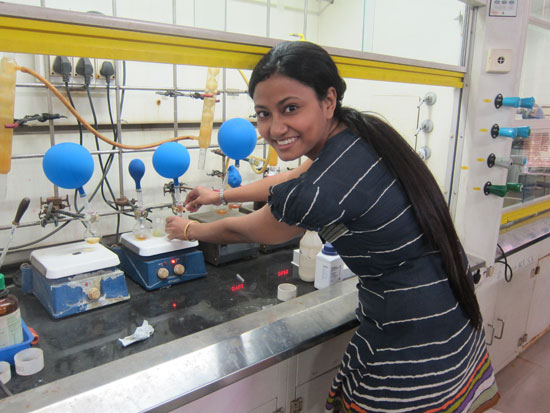 Lars Eklund had been invited to visit IACS by Professor Samaresh Bhattacharya and Dr. Reena Singh, who are connected with Professor Ebbe Nordlander at the Dept. of Chemical Physics at Lund University. This collaboration has grown out of the Erasmus Mundus programme mentioned above, and is progressing. Reena Singh – orifginally a student of Jadavpur University – spent the period August 2010- September 2012 as a post-doc at Lund University as a scholarship holder, and after returning to India she got a post-doc position at IACS and its Department of Inorganic Chemistry. She is doing research on Bio-inspired Oxidation Catalysis. Previously she worked on Synthesis and Reactivity of Dinuclear Model Complexes for Active Sites in Metalloenzymes.
Reena showed Lars around the extremely well-kept and beautiful IACS campus area and its many departments, with focus on her own department. Lars was impressed by the high standard of the laboratory equipment, the library, the exhibitions of the research being carried out over the years, and the conscious mix of academic work with social and physical activites. A sports ground is located within campus and at some places inside the buildings table tennis games are provided for. 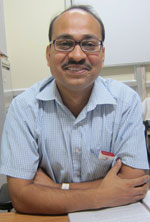 A meeting was also organised for Lars to meet Dr. Tapan Kanti Paine (photo to the left), Assocate Professor at the Dept. of Inorganic Chemistry, and now planning for new collaborative projects with Ebbe Nordlander in Lund.
The Dept. of Inorganic Chemistry is involved in the frontline research in synthesis, structure, reactions and properties of inorganic molecules and materials. The focussed areas of scientific activities are Inorganic Molecular Synthesis; Reactions and Their Mechanisms; Bioinorganic Studies; and Molecular Materials. 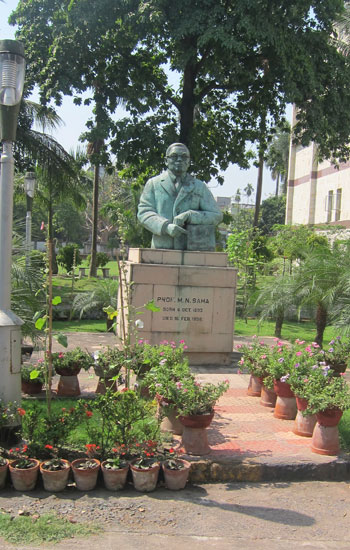 The IACS is produdly displaying its history with statues, and exhibitions of the famous researchers that have been connected to it. The Indian Association for the Cultivation of Science was actually founded almost 140 years ago, in 1876, by Dr Mahendra Lal Sircar. The most famous scientist so far was Sir C. V. Raman who worked at IACS during 1907 to 1933 on various topics of Physics making discovery of the celebrated effect on scattering of light in 1928. This discovery of what is known as the Raman effect was awarded the Nobel Prize two years later in 1930.
In 1946 the Association embarked upon a new development plan under the dynamic leadership of Dr. Meghnad Saha envisaging the creation of an active research school for investigation on the problems continuing with the fundamental studies in X-ray, Optics, Magnetism, and Raman Effect in which the Association had specialised in early years. Under the leadership of Meghnad Saha (on statue at campus), the new Jadavpur campus was opened, and the laboratories were shifted from the original site at Bowbazar Street in central Kolkata. The original objective of the Association, which continues even today, was to cultivate science in all its departments with a view to its advancement by original research and its varied applications to the arts and comforts of life. Other famous scientists that have been connected to IACS are Jagadish Chandra Bose, and Asutosh Mukherjee.

That IACS is still in 2015 a world-class research institution is obvious. In the 30 March 2015 issue of the Outlook magazine, an article tells of amazing new research at the IACS Department of Organic Chemistry. Led by Associate Professor Surajit Sinha, a group of scientists have synthesised a new effective drug to treat chronic pain that is not addictive as morphine. Their research results have been published in the peer-reviewed Bioorganic and Medicinal Chemistry Journal in UK, and patents are currently applied for. With a PhD from the Indian Institute of Science (IISc) in Bangalore, Dr. Sinha later carried out post-doc work at the University of California, Riverside, and Stanford School of Medicine in the US before joining AICS. Read the Outlook article entitled ”A Soothing Far Gentler”, written by Priyadarshini Sen.

Back to Jadavpur University, Lars met Mridul Bose at his office in the Dept. of Physics. Mridul Bose, who was the first contact person for the Erasmus Mundus programme, had just returned from a research conference on plasma research – his main research field – in Ujjain, Madhya Pradesh, where he had presented a paper on ”dusty plasma” related to the tea leaf paradox phenomenon, as it is called (that tea leaves gather in the center of the cup when the tea is stirred). Albert Einstein came with a solution on this already in 1926, explaining the phenomenon in terms of a secondary, rim-to-center circulation caused by the fluid rubbing against the bottom of the cup. The phenomenon has consequences in real life, for example can it explain the erosion of river banks (more information from Wikipedia).

Lars also met colleagues of Mridul Bose, who turned up for the social afternoon adda, the typical and particular Bengali gathering of friends in late afternoon with a mix of easy gossiping and intellectual conversations to enjoy along with deliscious milk tea, singaras(samosas) and mishti (sweets). On this day, the colleagues turning up were Associate Professor Abhijit Lahiri, and Professor Emeritus R. Bandopadhyay, both from the Dept. of Mathematics; and Dr. Jyoti Kumar Aliel from the Dept. of Physics. Besides Dr. Ritayan Chatterjee turned up, who spent two years at Lund University as an Erasmus Mundus scholarship holder, working on his PhD project at Lund Universty’s Dept. of Materials Engineering, besides staying at Lars Eklund’s residence. Ritayan is now working at a college in Haldia, south of Kolkata, but he hopes to return to Lund universit for post-doctoral research.

Finally, moving to one of the open air cafeterias of Jadavpur University, among the crowd of students and professors, Lars happened to meet Angelo Pugliese (photo to the left), an Italian who has lived in Kolkata since 1986, teaching Italian language at Jadavpur. Angelo informed that he has one friend in Sweden, and that is Dr. Ferdinando Sardella at Stockholm University. Nice coincidence that Ferdinando is an important member of the SASNET network, and it was through SASNET intervention that Ferdinando got an affiliation to Jadavpur University in 2005.