The division’s activities are split between research groups working with electromagnetic theory, diagnostic techniques for electrical insulation, the application, modelling and measurement of magnetic materials and superconductors, the application of Reliability Centred Asset Management to electrical power systems, and electromagnetic compatibility. 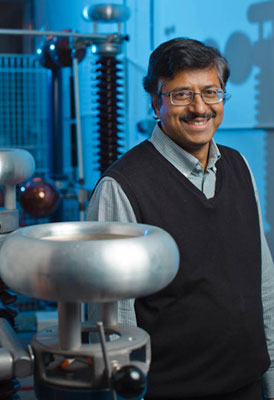 Rajeev Thottappillil received Ph.D. in Electrical Engineering from University of Florida, Gainesville in 1992. After a few  years of post-doctoral research on electromagnetics of lightning, he joined Institute of High Voltage Research, Uppsala University in 1995. Since September 2008, he holds the Chair in Electric Power Engineering and Design at Royal Institute of Technology (KTH), Stockholm.
After his Bachelor’s degree in Electrical Engineering from India, Rajeev Thottappillil has worked six years as Engineer in different industries in India, of which three years were with power companies. The main research contributions of Rajeev Thottappillil are related to electromagnetic interference questions in large distributed electrical systems such as power and railway networks, lightning protection, and hardening of civilian systems to intentional EMI. His present research interests include design of power systems components.

In June 2011, the Vice Chancellor of Pune University, India, Professor Raginath Kashinath Shevgaonkar, visited Sweden and was hosted by KTH Royal Institute of Technology, with which Pune University has a Memorandum of Understanding (MoU). During his stay, Prof. Shevgaonkar met Professor Thottappillil and many others. Read a report on Shevgaonkar’s Sweden visit.
Prof. Shevgaonkar was earlier attached to the Indian Institute of Technology (IIT) Bombay for many years. He was the Head of the Electrical Engineering Department, and also the Centre for Distance Engineering Education Programme (C-DEEP). During the period 2008–2010 he was Deputy Director (Finance and External Affairs), IIT Bombay.

This IIT Mumbai connection has been developed by Prof. Thottappillil, by reaching an agreement on collaboration regarding exchange of teachers and students within the field of Electric Power Engineering. In February 2012, a Linnaeus Palme Exchange Programme application was granted by  the International Programme Office for Education and Training (Internationella Programkontoret). The School of Electrical Engineering receives SEK 80 000 for the period 2012-13 to develop collaboration with IIT Mumbai. In March 2013, the project received renewed funding for 2013-14 with SEK 273 504. More information about the South Asia related Linnaeus Palme projects for 2013-14.
As part of the collaboration programme, a joint workshop on ”Transformer Design, Modelling and Diagnostics” washeld at Asea Brown Boveri (ABB) Corporate Research in Västerås on 5th June 2012. More information about the workshop.
Professor S.V. Kulkarni, the coordinating partner on the IIT Bombay side, stayed in Sweden for a week, during which time discussions were also held on developing educational collaboration between KTH and IIT Bombay in power engineering.