Division of Urban and Regional Studies, Department of Urban Planning and Environment; School of Architecture and the Built Environment (ABE), Royal Institute of Technology (KTH), Stockholm, 2015

PhD candidate Kh Md Nahiduzzaman from Bangladesh has had a research interest in Affordable housing, Urban governance and sustainable planning, House construction techniques in response to climate change, Remote sensing and GIS in decision making. For his dissertation project, he was supervised by Prof. Göran Cars, on increased un-affordability for shelter: A community based approach towards self-sustaining finance.
He has a background from Khulna University in Bangladesh, and later a M.Phil in Urban Planning from the Norwegian University of Science & Technology (NTNU) in 2006. Now he is working as a faculty member at the Department of City and Regional Planning at King Fahd University of Petroleum and Minerals (KFUPM), Saudi Arabia where he is involved in a number of national research projects in the category of an investigator and consultant besides his teaching responsibility. 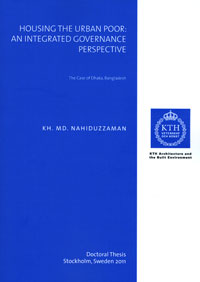 Mr. Nahiduzzaman defended his doctoral dissertation, entitled ”Housing the Urban Poor: An Integrated Governance Perspective. The Case of Dhaka, Bangladesh” on Friday 3 June 2011. The opponent was Professor Alfredo Brillembourg, ETH Zürich, Switzerland & Columbia University New York, USA.
Abstract: It is claimed that low-income people of Dhaka city do not have the financial ability to enjoy a decent living (housing) environment. There is a gap in how low-income people can afford houses with support from formal financial institutions given their lack of available financial means. Access to formal financial means is greatly hindered by the very fact of their poor finances and the absence of any form of land tenure security. This study responds primarily to the critical issue of whether government is unaware of the informal housing practices currently in place at the community level or that government is ignoring the need for low-income affordable housing.
This study finds that Jhilpar inhabitants pay nearly 30 percent of their monthly income to housing: in absolute values they pay even more than middle- and some high-income populations who understandably enjoy better housing services and amenities. Moreover, the slum inhabitants pay more for a limited supply of basic services i.e., electricity. This study concludes that the formal housing gatekeepers lack knowledge of the ‘informal’ sector i.e.; the actual financial ability of lowincome people; understanding of the systematic operation of community-based cooperative business and the location decisions (employment-location-of-slum-nexus) related to slum settlements. More information about the thesis.

Besides his research work, Mr. Nahiduzzaman has been involved in teaching at the department. He has been the Course Coordinator for the Masters programme in Sustainable Rural and Urban Development; and Assistant Coordinator for the Mastrers programme in Sustainable Project Management (SUPREME). He has also lectured at the Sida funded international training program (ITP) on Financing and Management of Local Infrastructure Initiatives in 2007; been a Guest Lecturer at the Masters programe in Human Settlements and Housing, and a Seminar Leader for the programme in Contemporary trends in Urban Planning and Design. More information about the Masters programmes at the department.
Besides, Nahiduzzaman has supervised MSc students’ Master’s Projects in Spatial Planning.

Saleh Ahmed from Bangladesh was a MSc Student in Spatial Planning (photo to the left) till January 2006. Along with G.M. Sonny Shankhary, MSc Student in Geodesy and Geo-informatics, also at KTH, he presented a paper on ”Synergy between a Sea Port and Regional Economic Growth: A Case from South-Western Bangladesh” at the conference on ”Structures of Vulnerability” held at Stockholm University in January 2005.
Abstract: Surprisingly enough, though Bangladesh has all types of potentialities to be the economic hub in Southern Asia, this country is suffering badly for its deficiency of infrastructural set ups alongwith poor management capacity for large scale development exercise. The case is not also different for the Mongla Sea Port, which is in the South Western Part of Bangladesh and simultaneously the second largest seaport of Bangladesh. Alongwith the economic perspective, Mongla Port also has the importance from Geo-political point of view. By using this Sea Port, GoB (Government of Bangladesh) can divert the overwhelming load of the largest Sea Port of Bangladesh; Chittagong Sea Port. Right at this time, if the Mongla Sea Port can be energized properly, then the revenue income of GoB would increase radically alongwith the industrial upliftment in this region. 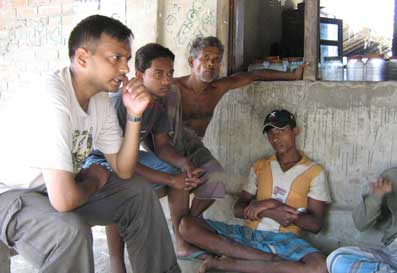 Mentionably, this South Western Zone of Bangladesh, which is basically Greater Khulna Region, once famous for its industrial heritage even in early 90s. But now the scenario is almost dormant. By using this Port, Bangladesh Government also can spearhead the spatial integration of South Asian Economy; as we know, both Nepal and Bhutan are land locked countries. If they can use this port, simultaneously with the revenue earning of GoB, the Government of Nepal and Bhutan would also be remarkably benefited. And there would be a huge regional economic re-structuring if this Port System Management could be developed at the same time. From this paper, there would be illustrated the strategies to activate this Port System Management alongwith Regional Economic Growth Strategies for South Asian Economic Integration, particularly among Bangladesh, Nepal and Bhutan.

After completing the programme at KTH, Saleh Ahmed received a DAAD (German Academic Exchange Service) Scholarship for completing MSc in Regional Science from the University of Karlsruhe (Germany). During that study, he did an exiting comparative research of Slums and Favela in South Asian and South American context. Nevertheless, he pursued different aspects of development through his MSc research.

From October 2007 till August 2008, he was a DAAD Carlo Schmid Programme (CSP) Fellow for working with Local Economic Development Programme at the International Labour Organisation (ILO). Within this time, he was particularly assigned for day-to-day technical backstopping for a ILO/Dutch Government Funded Project in eastern Nepal, titled “Employment Creation and Peace Building based on Local Economic Development (EmPLED) in Ramechhap and Dhanusha Districts in the Eastern Region of Nepal”.  As the secondary responsibility he concentrated on the technical and policy coordination with Social Finance Department, ILO on rural financial issues for different Asian and African countries, and at the end he was working as Lead Author for the preparation of ILO HQ’s policy paper on “Climate change and the potential response through Local Economic Development”.
Recently he has been assigned as Avian Flu Advisor (Local Economic Recovery) with ILO/CRISIS-International Programme on Crisis Response and Reconstruction in Geneva.
(Photo above: Saleh Ahmed during interview situation with villagers in Southwestern part of Bangladesh)