The Division carries on research and higher education on technical, scientific and industrial change from a historical perspective. The division has three chairs, in the History of Technology, Environmental History, and Industrial Heritage Research, in addition to more than 20 senior researchers and doctoral students. The staff members have different backgrounds and research interests within the fields of History of Technology, Industrial Heritage Research, History of Science, Political Science, and Environmental History.

PhD Jan af Geijerstam worked at the department till 2008. From October 2010, he is connected to the Department of Conservation (Kulturvård), University of Gothenburg. 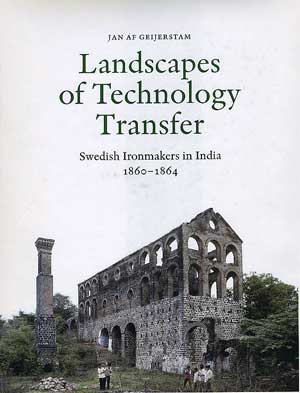 Jan af Geijerstam defended his doctoral thesis titled ”Landscapes of Technology Transfer. Swedish Ironmakers in India 1860–1864” at KTH on Friday 4 June 2004. The thesis deals with the transfer of iron making technology from Europe to India in the 1860s. Within a broad analysis af Geijerstam focuses on three Swedish metallurgists (Nils Wilhelm Mitander, Julius Ramsay and Carl Gustaf Wittenström) who at that time were engaged by British interests, working at the Kumaon Iron Works close to Nainital in Uttaranchal, and at the Burwai Iron Works, south of Indore in Madhya Pradesh. In their Indian setting, both ironworks were pioneering enterprises, based on the most modern European ironmaking technology.
Neither ironworks went into full and continuous production and the Swedes had to return to Sweden. The history of the ironworks and the Swedes forms a fascinating narrative.
”Landscapes of Technology Transfer” is a wide-ranging empirical study. From a local and individual perspective it traces lines of connection across boundaries of time and geography. The historical landscapes of technology transfer are described in their cultural, social, economic and political dimensions and the remains of the ironworks and their local landscapes in present-day India are used as a central source for writing their histories. Read an abstract of the dissertation (as a pdf-file).
The thesis has later been published by Jernkontoret (the Swedish Steel Producers’ Association) as a beautiful coffee-table book as part of its publication series Jernkontorets bergshistoriska skriftserie, Volume 42 (2004). More information.
On 8–11 March, 2000, an Indo-Swedish conference on ”Iron and steel production in India and Sweden – history, technology and development”, was organised at Nainital, India. The conference showed that there are big possibilities in fruitful interdisciplinary connections between Archaeology, Ethnography, History of Technology and present day Development issues.
As an outcome of the conference a book was published on 31 March 2003 at a function at the International Centre in New Delhi, India, presenting an Indo-European Perspective on the history of iron – from ancient times to the late twentieth century. The editors of the book, called ”Tradition and Innovation in the History of Iron Making”, Jan af Geijerstam, and Girija Pandefrom the Dept. of History, University of Kumaon; and were present at the occasion. More information on the Indo–Swedish book project.

Before his academic career, Jan af Geijerstam worked as a journalist from the 1970’s and onwards.
After the dissertation, Dr. af Geijerstam did not focus much on South Asia in his research. From 2009, he is no longer connected formally to the Royal Institute of Technology (KTH). Instead he works mostly as a kind of free-lance researcher, assigned by different companies, authorities and agencies, including Mälardalen University, to make studies on Swedish Industrial History.
He has however kept his international contacts, now coordinating a collaboration between the International Committee for the Conservation of the Industrial Heritage (TICCIH) and the Modern Asian Architecture Network (mAAN). The latter organisation was established in 2000 as a loosely knit network of architectural researchers and specialists committed to study, preserve, and rehabilitate the modern architecture, townscape, and civil-engineering heritages in Asia. Its latest conference was held in New Delhi in February 2009, with the theme ”Asian Cities — Legacies of Modernity” (more information).

Along with the archeologist Eva Myrdal-Runebjer (previously at Museion, Göteborg University, now at the Museum of Far Eastern Antiquities in Stockholm), Jan af Geijerstam gave a suggestion to the SASNET virtual conference in December 2000 that SASNET should organise a seminar on ”Exploring the state of the art of studies of the South Asian societal/nature interface” with the view of bridging the gap between the humanities, the social sciences, the natural sciences and technology. Read the suggestion.
SASNET gave a planning grant in the August 2001 for this project, see http://www.sasnet.lu.se/grants.html.