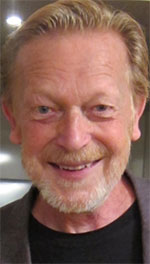 On 13 February, 2016, Tomas Löfström, well-known Swedish travel writer, author and cultural journalist, and a dear personal friend, passed away. Tomas, born in 1948, wrote several fascinating books based on his travels not the least in South Asia, and contributed with articles for Vagabond, SYDASIEN and other magazines and newspapers. Among his books could be mentioed Vägen till Kathmandu (The road to Kathmandu, 1975); Landet mitt i världen(The Country in the midst of the world – on Afghnaistan, 1976); Mellan Haväng och Himalaya (Between Haväng and the Himalayas, 1978); Dalen där Buddha dör (The valley where Buddha dies – on Ladakh, 1979); Den långa resan till Lhasa (The long journey to Lhasa, 1983); and Den siste resenären – en biografi om Torgny Sommelius (The last passenger – a biography of Torgny Sommelius, 2012).

Tomas Löfström was also instrumental in launching the Indo-Swedish Translation Project. This was started as a result of visits by Swedish writers to India in 1996 and Indian writers to Sweden 1997. Under the name Indienbiblioteket, the project was officially inaugurated by the Indian ambassador to Sweden, Ms. Chitra Narayanan, at Göteborg Book Fair in September 2001. It developed with a number of new publications almost every year. The project was economically supported by Sida (Swedish International Development Cooperation Authority) and the Swedish Institute (maintaining cultural relations with foreign countries). The project also had close contacts and cooperation with Sahitya Akademi, the Indian literary academy, as well as other Indian organisations and publishing houses like Katha and Tulika. 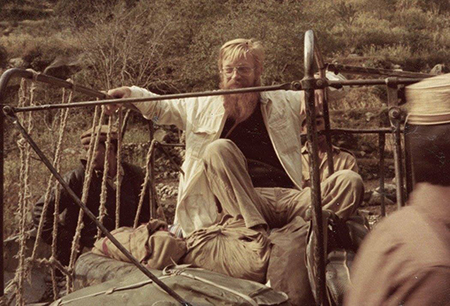 The aim of the project was to spread knowledge and understanding of Indian culture in Sweden by generating translations and publishing of modern Indian fiction and other books – and vice versa. In Sweden the books were published by different publishers, e g Ordfront förlag and Tranan, as a series: Indiska Biblioteket (Indian Library). More information about the project.
Read a report from Gothenburg Book Fair 2008.
Tomas and I knew each other from our childhood in Lund, then studied Social Anthropology at Lund University together, and made some exciting travelling together in Afghanistan and northern Pakistan in 1975 (photo of Tomas on transport from Chitral to Ayun on way to Bumboret Valley). Later, being the editor in chief of SYDASIEN from 1982 till 2007, I also published many excellent articles by Tomas over the years.
In recent years our contact has mainly consisted of visiting him at his country house (Grönalund south of Kivik in Skåne) turned into being a literary café. I will miss his gentle personality much. Tomas funeral will take place in neighbouring village of Rörum in first week of March.
Lars Eklund