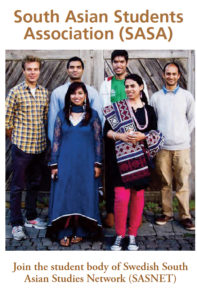 The South Asian Student Association (SASA) at Lund University is the student body of Swedish South Asian Studies Network (SASNET). It was formed in early 2013 in collaboration with the Social Sciences students Union to promote students interest for South Asia and provide a platform for educational and cultural exchange between South Asian students in Lund and other international students. SASA was officially launched on 24 April 2013 at a high level South Asia Symposium organised by SASNET.

On Thursday 17 October 2013, SASA elected its new board for the academic year 2013/2014,  Maldivian Bachelors student in Development Studies Program – and currently working as assistant communications officer for SASNET – was elected SASA President, and Sharmin Rashid from Bangladesh, a Masters student in Gender Studies, was elected as the Vice President. The treasurer is Swati Shukla, Indian post-doc researcher in Biomedicine. Umashree Pancholy from the International Environmental Economics program was elected Activities Manager.
Other participants included Yiaser Arafat from Bangladesh’s University of Engineering and Technology, who is studying in Lund this fall as an Erasmus Mundus exchange student. He expressed interest in networking with SASA and running joint projects with his rural students ogranisation in Bangladesh.
Saimum, a lawyer from Bangladesh who is working on ”Freedom of Expression for Online Human Rights Defenders” project under Lund University’s Social Innovation in a Digital Context (SIDC) programme sponsored by Swedish Institute, was also present at the meeting and expressed interest in supporting SASA activities.
At the meeting, the new board decided on educational, cultural and social activities for 2013/2014 academic year, which includes monthly South Asian student gatherings, movie night, debate and academic discussions relevant to South Asia. 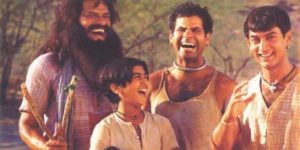 South Asian Student Association (SASA) held its first movie night on Wednesday night, May 22 at Social Sciences Union. The first movie screened was “Lagaan: Once upon a time in India” – a story about a courages young man named Bhuvan, from a small village in India who leads a group of villagers to play cricket against the British colonial army. The British demands the villagers to pay double taxes despite the poor harvest, or avoid paying by beating the British team at a cricket game. The villagers master this foreign sport in three months, and totally kicks Britain’s butt in the game! Although the movie was over 3 hours long, the drama, dancing and the plot, kept the 20 member audience captivated throughout the whole night. SASA movie night is part of its initiative to create a platform for cultural exchange and connecting with South Asia. 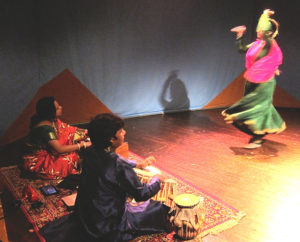 On Sunday 13 October 2013, SASA co-organised an Indian Cultural Concert with SASNET, featuring the performance of the extraordinary talented North Indian classical singer Sudokshina Chatterjee Manna from Kolkata. Her her Tabla player husband Subrata Manna, and the Kathak dancer Sohini Debnath also joined. The audience was thrilled by the high standard of the performance.They came to Sweden as part of a European tour, being invited to Lund by SASNET. The Lund concert, organised in collaboration with Theatre Sagohuset and Sensus, was unfortunately the only one in Scandinavia. In Germany the group performs for full houses at approximately 20 places and ends up with a grand concert at the Embassy of India in Berlin. Read more about the concert. 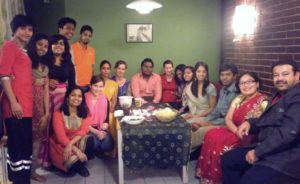 South Asian Students gathered to celebrate Diwali on 3 November 2013. SASA took the initiative to celebrate Diwali following a large number of requests from South Asian students. Diwali is a Hindu festival of lights, held in the period October to November. It is particularly associated with Lakshmi, the goddess of prosperity, and marks the beginning of the fiscal year in India.
Around 30 people from different South Asian countries and few european students participated in the Diwali Night Celebration held at SASA President Hawwa Lubna’s home. The board members made South Asian food and desert. The event recieved wide appreication and positive feedback from participants.

– Seminar and Documentary film on Kashmir

SASA co-organised with SASNET a successful seminar entitled ”Fragile Peace in Kashmir. Is there any way forward?” at Lund University on Thursday 14 November 2013. The two invited speakers were Professor Sten Widmalm from the Dept. of Government, Uppsala University, and  PhD Candidate Muhammad Farooq Sulehria from the School of Oriental and African Studies (SOAS), University of London, UK. The seminar was followed by a screening of ”Lakeer”, a feature film on Kashmir by British-Kashmiri film maker Ali Daalat, who was present and held an introductory speech about the film about people who have had to suffer great pain and separation because of India’s partition in 1947. The film skillfully brings alive the pre- and the post-partition life in Jammu and Kashmir, and how the locals have coped with their lives after the Partition. More information about the SASNET/SASA Kashmir seminar. 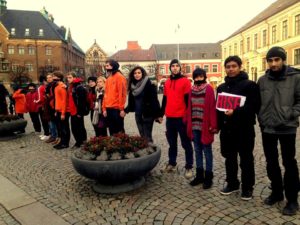 On 14 February 2014, South Asian Students Association (SASA) supported and participated in the “One Billion Rising” global movement to highlight the issue of violence against women and demand justice for victims of rape and abuse. The One Biillion Rising Lund event was organised by Social Sciences Student Union. The event included a a silent flashmob at the Stortorget, followed by a march and documentry screening.
Members of SASA joined all the activities.
– South Asian Youth Seminar

A seminar entitled ”South Asia’s Democratic Struggle – Youth Perspectives” was held at Lund University on Monday 3 March 2014, 16.00–18.00. This well-attended event was jointly organised by SASNET, the South Asian Students Association (SASA), the School of Social Work, and South Asian participants in the ongoing Social Innovation in a Digital Context (SIDC) programme at Lund University. The purpose of the seminar entitled was to provide a platform for the young voices from the region. South Asian students and social activists at SIDC program coming from different countries including India, Bangladesh, and Pakistan explored the democratic struggles of their respective countries and what young people are doing to fight social and economic injustices as individuals and organised movements. More information. 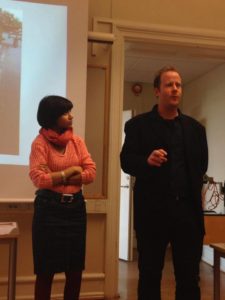 Australian journalist John James Robinson held an appreciated SASNET seminar on ”Paradise Lost. Beyond the Beach, Booze and Bikinis: Reporting the Dark Side of the Maldives” in Lund on Tuesday 25 February 2014, 15.15–17.00. The seminar was jointly organised by SASNET, the South Asia Student Association (SASA), and the School of Social Work, Lund University. Venue: Edebalksalen, School of Social Work (Socialhögskolan), Bredgatan 26, Lund. See the poster.
J J Robinsson has worked in Maldives since 2007, and being the Editor of the Minivan News, the first independent English-language news service service in the country, he has covered extensively about the democratic transition in Maldives and the recent 2013 election crisis. He was among the only foreign media to witness the 2012 coup that toppled Mohamed Nasheed, the liberal democrat who pushed out a 30 year dictatorship in the country’s first multi-party elections in 2008, and made Maldives into a internationally-famous environmental symbol.
SASA President Hawwa Lubna from Maldives also joined the questions and answers session after the seminar talk. More information. 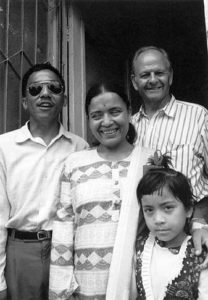 The South Asian Student Association (SASA) at Lund University – the student body of SASNET – now has launched a new series of what is called Fika Without Borders South Asia. In collaboration with SASNET and the voluntary organisationABC Sweden, SASA successfully organised a Fika Without Borders gathering focusing on Nepal, on Wednesday 16 April 2014, 17.00–19.00, at the Social Sciences Students Union building, Paradisgatan 5 S, Lund (close to SASNET’s office). The programme was being planned for by Sharmin Rashid from SASA and Lars Eklund from SASNET, and included a skype onversation with Wolf Price, a documentary film maker in Kathmandu, presentations by Rebecca Palmer from ABC on their projets in Nepal; by Leif Bjellin from the Dept. of Biology, Lund University with 40 years of experience of working in Nepal; and Hawwa Lubna from SASNET, on her Nepalese travel experiences. Nepalese food was served to the audience of about 30 people.
The launch of SASA 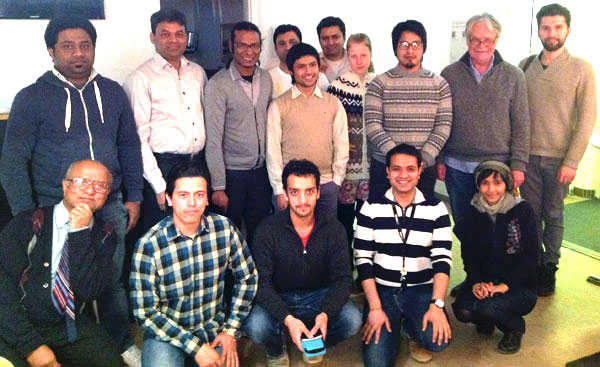 The decision to form SASA was taken at a meeting organised by SASNET on Tuesday 19th March 2013, when a group of international students at Lund University met to discuss the issue. On this occasion, Lars Eklund from SASNET informed about the Swedish South Asian Studies Network at Lund University, and its seminar programmes and web resources. He also invited the students to assist SASNET in organising major events such as the 24th April 2013 South Asia symposium.The interim SASA coordinator Hawwa Lubna, student at the Bachelor of Science Programme in Development Studies (BIDS), and SASNET’s Maldivian resource person at Lund University, then explained the purpose of the new forum to be the creation of a student community representing all nations of South Asia, that will organise meetings, film shows and cultural events by itself, and at the same time work closely together with SASNET.
Around 15 students from different International Bachelors, Masters and PhD programmes at Lund University turned up for the meeting held at the Social Sciences Student Union building (”Samvetet”), Paradisgatan 5 S. The majority came from the Faculty of Social Sciences, but a considerable number also from the Faculty of Engineering. There was an overwhelming support for the proposal to form SASA, and to register it as a student body at Lund University.Professor Emeritus Baboo Nair also participated in the meeting. He talked about his own long-standing relation to SASNET, and the positive effects it has meant for him and his research.

The South Asian Students Association (SASA) was then formally launched on Wednesday 24th April 2013 in connection to the 2013 SASNET South Asia Symposium held that day.

SASNET deputy director Lars Eklund briefly introduced the association, and then Mr. S M Shakil (photo), SASA student representative, held a speech that marked the formal inauguration. The new forum was declared open for students coming from the South Asian countries studying at Lund University, but also for Swedish and other International students/researchers with an academic interest in South Asia. Besides, the door is open for students also at neighbouring universities.