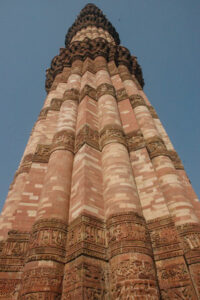 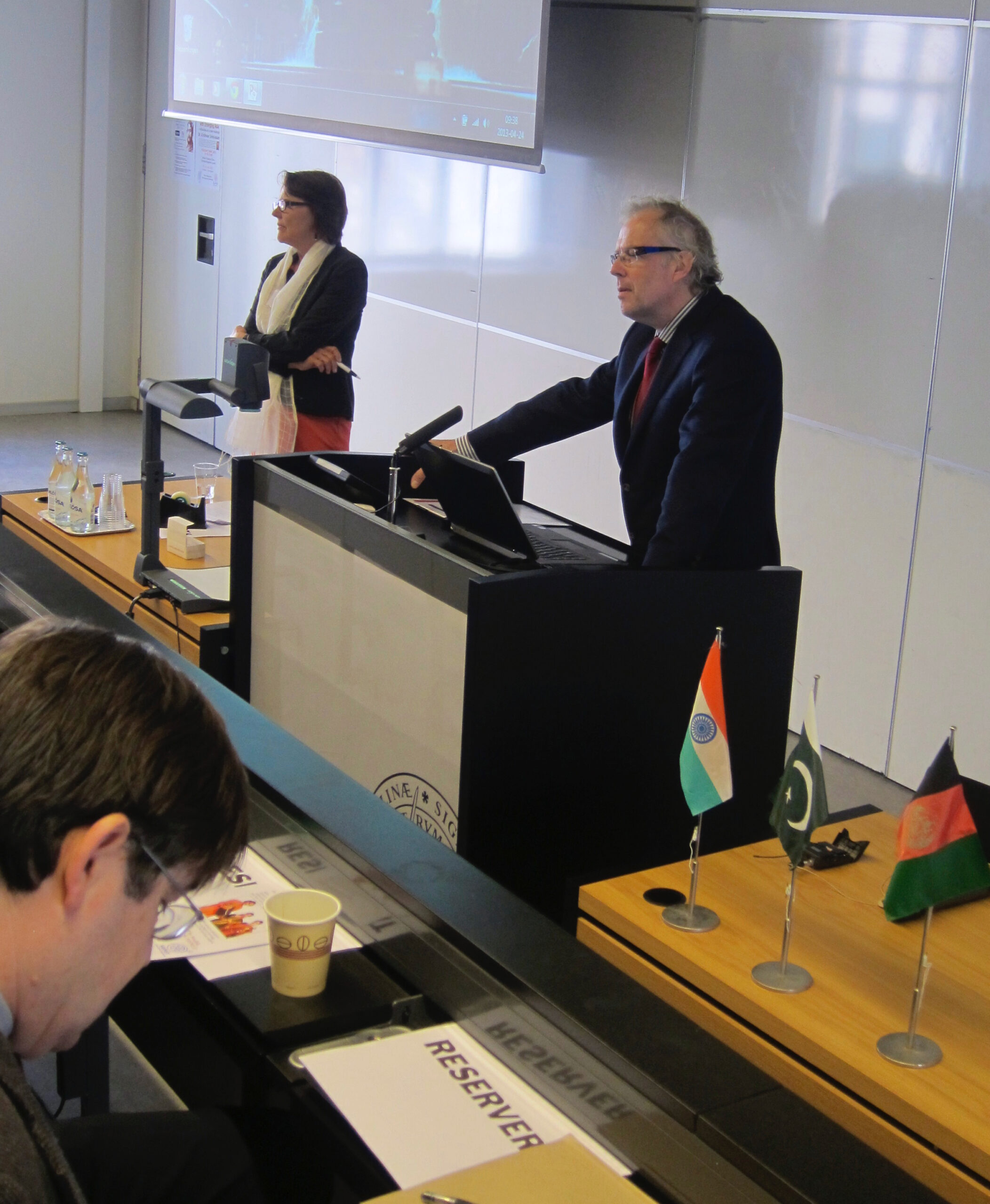 The Symposium was introduced by Assistant Vice Chancellor Sven Strömquist, Professor of Linguistics and Phonetics, Lund University; and Dr. Anna Lindberg, SASNET Director, who also was the mediator throughout the day.
In a concluding panel discussion the Ambassadors and Embassy representatives of Bangladesh, India, Nepal, Pakistan and Sri Lanka participated in a dialogue with the speakers on the theme for the day – ”The Wonder that is South Asia”.
The Symposium was followed by a cultural programme at the same venue featuring the Bamboo Flute player Shantala Subramanyam and her accompanying musicians.

The entire symposium was recorded by Mr. Talat Bhat, and is now available on SASNET’s YouTube Channel. 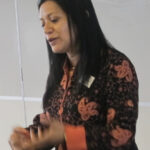 Professor Dina Siddiqi, Department of Economic and Social Sciences, BRAC University, Dhaka, lectured on ”Beyond Shahbagh: Islam, Nation and the Many Faces of Gendered Modernity in Bangladesh”. See Youtube recordings (not complete).
Abstract: In this paper, Prof. Siddiqi mapped the contradictory processes through which the nation is gendered and gender (read women) itself nationalized in Bangladesh. She tracked how localized structures of meaning and histories are folded into global discourses of developmental modernity, Islam and feminist narratives of escape from religion/culture to produce the complex materialities that shape most women’s lives in the country. She cautions against conventional readings of the ‘woman question’ that rely on oppositions between Islam and secularism, or tradition and modernity, emphasizing instead the mutually constitutive and entangled nature of political economy and cultural formations. 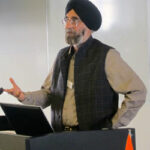 Professor Surinder Jodhka, Chair, Centre for the Study of Social Systems, Jawaharlal Nehru University, India & ICCR Guest Professor 2012/13 at Lund University , lectured on ”The Indian Middle Classes: Number Games and Social Change”. See Youtube recordings
Abstract: The middle class is a modern category. It emerged in Western Europe with the rise of industrial society, accompanied by a free market economy, individualism and a new democratic politics during the 18th and 19th centuries. In the Indian context, the British colonial state produced a middle-class for its own requirements. The British needed a class of native babus,Indians, educated in western-type institutions, for help in administering the subcontinent. Even during the post-independence period, the middle-class expanded directly under the patronage of the Indian state. The state recruited a large number of educated Indians for carrying out its policies of economic growth and its expanding spheres of governance. As in the colonial period, the class drew its power and influence through the mediating role it played between state and society in a variety of ways. India embarked upon the path of economic liberalization during early 1990s. Over the last two decades or so Indian economy has grown at a steady annual growth rate of 7 to 9 percent. However, unlike the previous two moments, most of the economic growth in the recent past has been in the private sector, in the “new” economy.

Delineating this historical trajectory, Prof. Jodhka tries to assess the social and political implications of the rise and expansion of middle-class in India. The size of middle-class in India has been steadily growing. Depending upon the method of calculation, their number ranges from anywhere between 10 to 30 percent of the Indian populations. Though it may appear to be a rather small proportion of the total population, their absolute number would exceed many individual countries of the developed North. In other words, with the process of economic growth, social structure of India is also changing, from the one characterized by sharp contrast between a tiny elite and a large mass of poor, to the one with substantial middle classes. Apart from reducing poverty, growth of middle class also provides a stable market-base to a capitalist economy.
Prof. Jodhka underlines the point that the “middle-class” in India has been a privileged space, occupied mostly by the historically advantaged sections of the Indian society. However, thanks the state policies of affirmative action, sections of historically disadvantaged categories of Indian population have also joined the ranks with middle class. While on the one hand this has increased diversity within the middle-class, on the other, it is has made Indian democracy more vibrant, giving voice of the margins. Diversities, vertical and horizontal, have always been a feature of the Indian middle-class, as indeed of the Indian society. 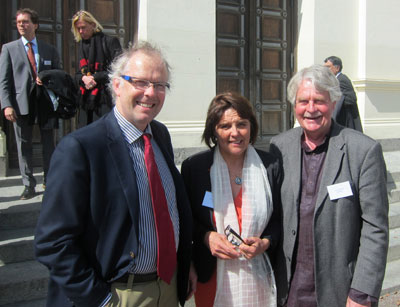 Formal launch of the South Asian Student Association (SASA). SASNET deputy director Lars Eklund briefly introduced the association, and then Mr. S M Shakil (photo), SASA student representative, held a speech that marked the formal inauguration. The new forum is open for students coming from the South Asian countries studying at Lund University, but also for Swedish and other International students/researchers with an academic interest in South Asia. Besides, the door is open for students also at neighbouring universities.

Lunch for invited speakers and ambassadors/embassy representatives at Pelarsalen (The Pillar Hall) inside the Main Universty building. The lunch was hosted by Assistant Vice Chancellor Sven Strömquist 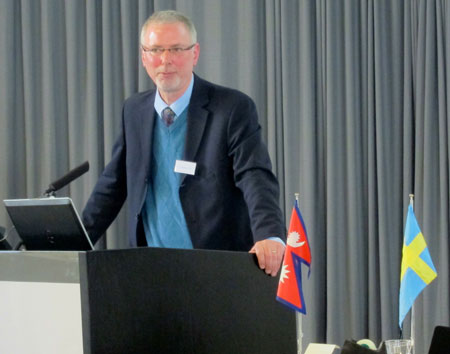 Abstract: In November 2006, a Comprehensive Peace Agreement brought an end to over ten years of internal armed conflict between the Nepali state and the Communist Party of Nepal (Maoist), and the stage appeared to be set for the creation of a New Nepal which would be an inclusive, democratic, secular, federal republic. Steps taken in this direction included the selection of a new national anthem, the promulgation of a new Interim Constitution, the election of a 601-member Constituent Assembly, the cantonment of the Maoist armed forces, and  the abolition of the Shah monarchy that had created the nation state some 239 years earlier. Now, over six years after the end of the conflict, many of the promises of the Comprehensive Peace Agreement remain unfulfilled.  The Constituent Assembly was dissolved at the end of May 2012 and the country is locked in a political stalemate. This presentation presentes an overview of events since 2006 and attempt to explain why it is that the ‘New Nepal’ imagined in 2006 remains a distant prospect. 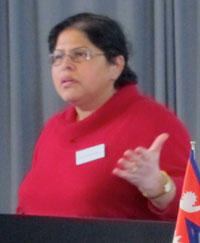 Dr. Ayesha Siddiqa, Civilian Military Analyst and Political Commentator, Islamabad & previously Visiting Scholar at Johns Hopkins University, USA, lectured on ”Pakistan’s Middle Class and Modernity – Between the Military and Militancy”. See Youtube recordings
Abstract: Some of the new literature on Pakistan highlights the strengthening of the middle class as a phenomenon which will determine the country’s future and push it towards modernity. Indeed, in the past five to six years the bulk of media reports on Pakistan have highlighted the growth of an independent media and judiciary as an indicator that the country is at a turning point. However, as this paper argues, modernity in Pakistan has to be defined differently as a combination of two opposing trends – material modernity that strengthens the military and ideological modernity that has given rise to greater religionism that often translates into extremism as well. The middle class, in fact, views religionism as an extension of its influence over traditional societal power centers. Thus, the new Pakistan will continue to be a case of weak-nationalism/strong-religionism with the state bureaucracy and the middle class hoping that it may become one day an example of strong-nationalism/strong-religionism. 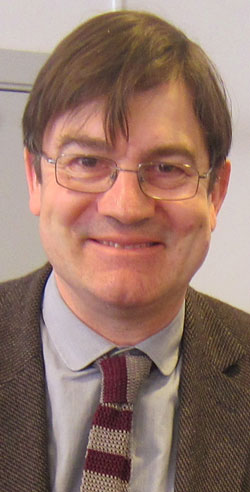 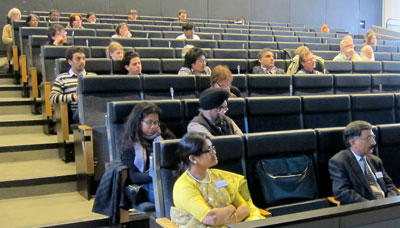 Abstract: Sri Lanka’s Eastern Provice is the country’s most ethnically and religiously diverse region, and was deeply affected by the civil war that ended in 2009. Drawing on material from a multi-disciplinary research project carried out in the closing years of the war, Prof. Spencer argued that, for people trapped in a long and violent conflict, religion has provided not merely a place of retreat and consolation, but also institutions and leaders who have played a key role in local initiatives to mediate between warring parties and contain potentially explosive situations. He also shows that the same leaders and institutions can, in certain situations, be a source of new conflict, while years of conflict have generated changes across all the region’s religious institutions.

16.45 – 18.00 Panel discussion on ”The Wonder that is South Asia”. See Youtube recordings
The Ambassadors/Embassy representatives of the South Asian countries to Sweden in a dialogue with the speakers. 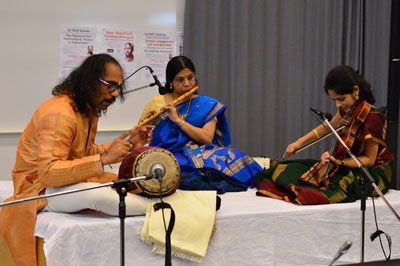 Shantala Subramanyam has been performing solo concerts in reputed organizations all over India since a young age.  She has toured extensively across South India performing in many prestigious organizations. She has tour extensively in USA and Europe for her solo concerts. At this time in India where women flutists are only a hand few , Shantala is bound to emerge as a dominant contributor to this field owing to her diligent and hard training. She has been highly appreciated by music critics for her melodic presentations combined with complex rhythmic patterns.
Her co-musicians at the Lund concert were Akkarai Sornalatha on Violin, and K Sai Giridhar on Mridangam.

Sornalatha is a very promising and talented young violinist as well as vocalist. She has accompanied many reputed artists from South India and performs duet concerts both as a vocalist and violinist with her elder sister Subhalakshmi. Giridhar has travelled extensively in India providing mridangam accompaniment to many a famed musicians and fusion groups in over 500 concerts thus far.  He has also had the opportunity to be a part of Jungle orchestra, a fusion group from Denmark. The reason why a number of Danish friends turned up for the concert. 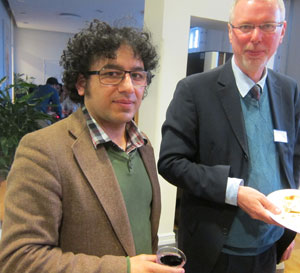 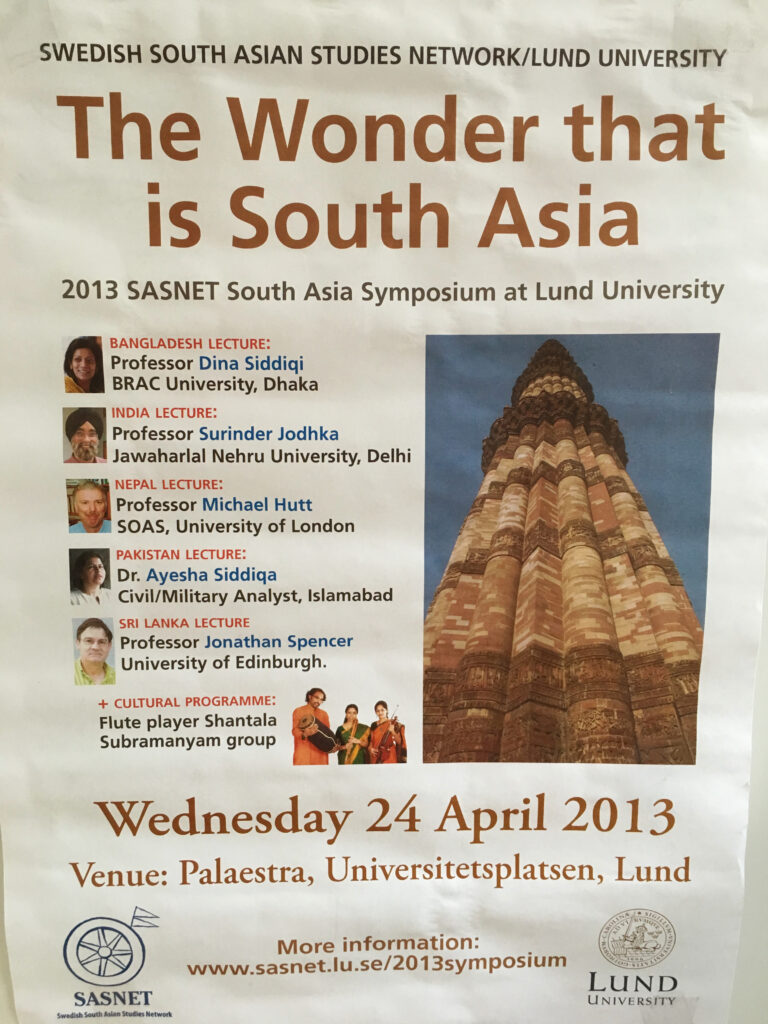 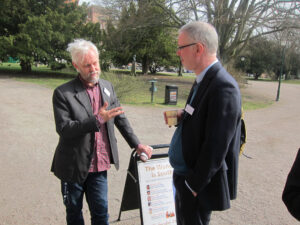 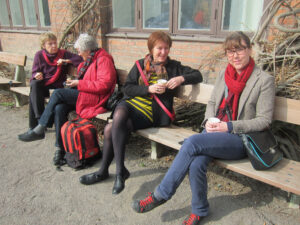 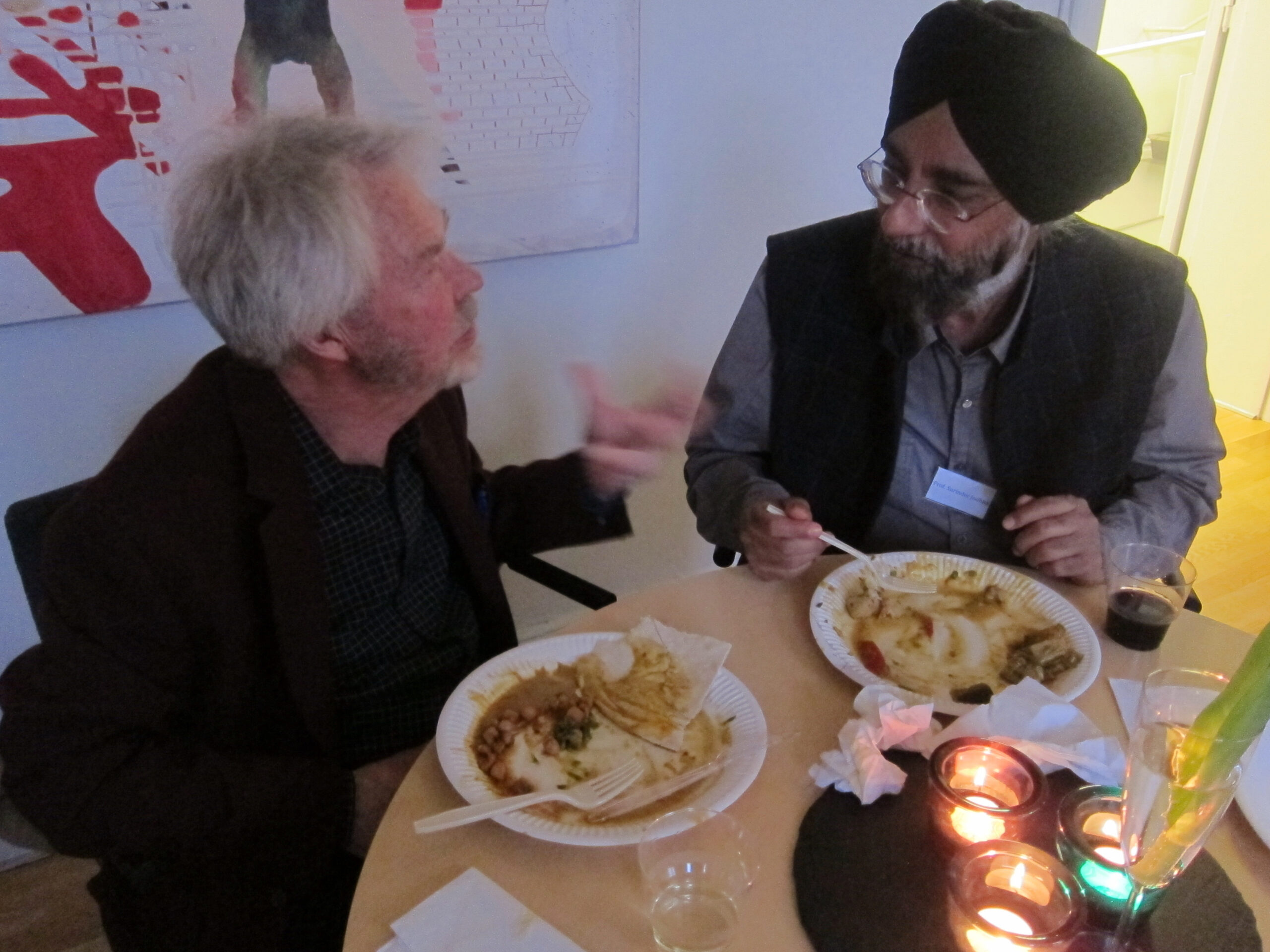 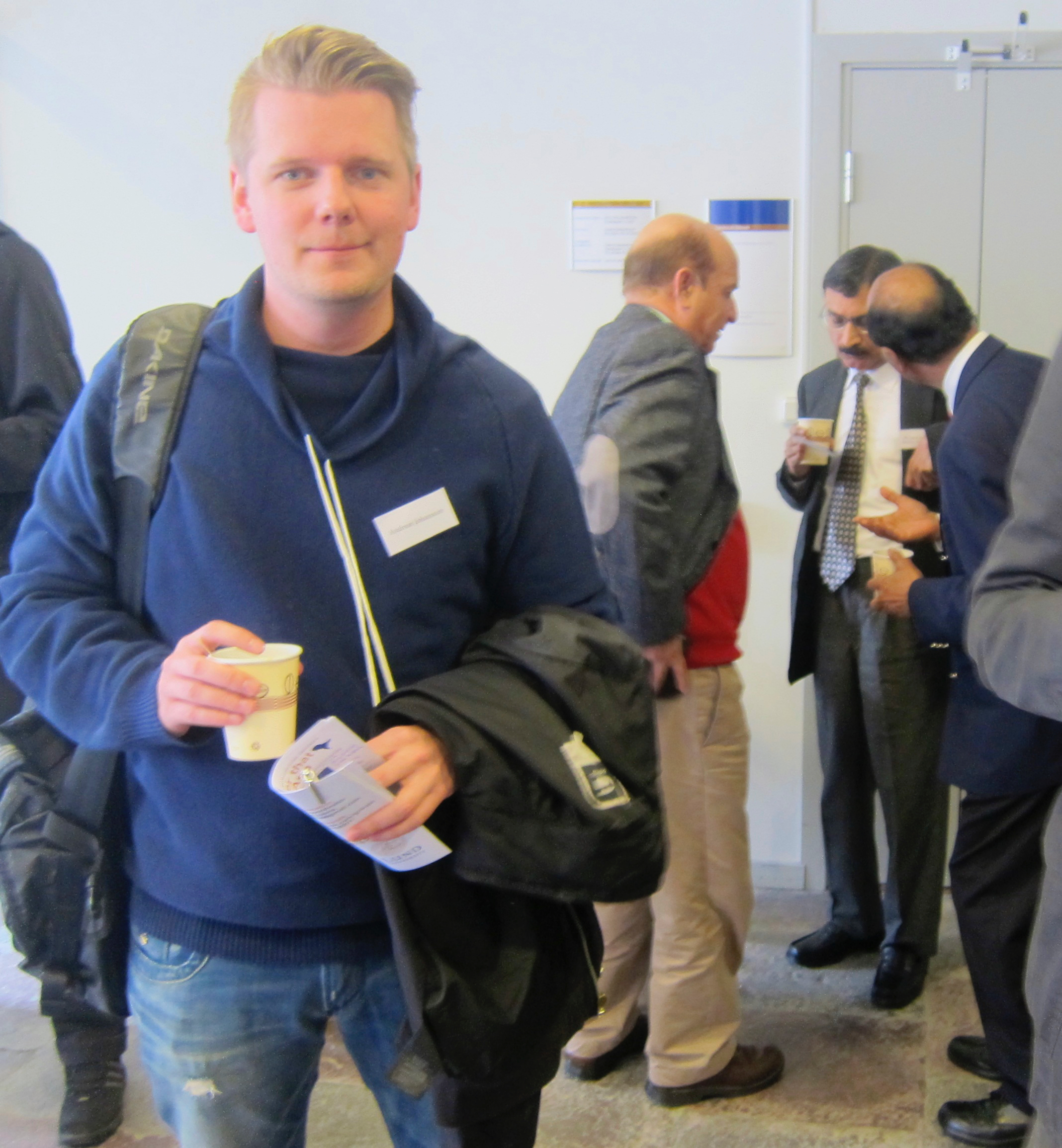 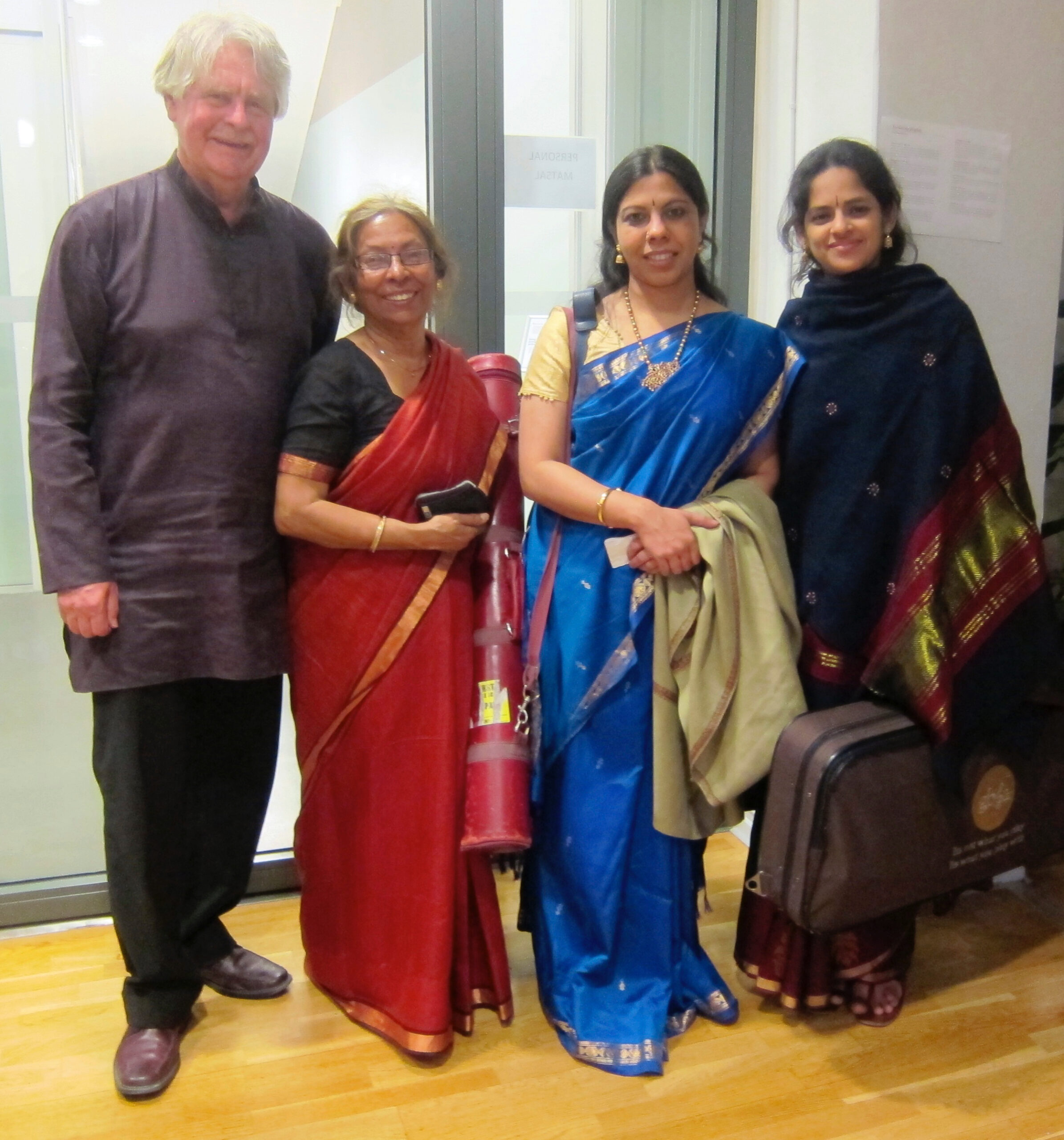