Minority Rights in South Asia in focus at Brussels conference 2011 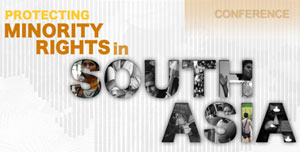 The Netherlands based organisation Global Human Rights Defence (GHRD) held a conference entited ”Protecting Minority Rights in South Asia” at the EU Parliament in Brussels on Thursday 8 December 2011 – the international human rights day. It was organised in collaboration with Cecilia Wikström, Member of the European Parliament representing the Swedish Liberal Party, and the Alliance of Liberals and Democrats for Europe (ALDE) Committee of the European Parliament. SASNET’s deputy director Lars Eklund participated in this highly interesting conference where human rights defenders from Bangladesh, Pakistan, Bhutan and Nepal addressed the situation in their respective home countries to some 130 European representatives, MEPs, policymakers, NGOs and media.

Amongst the speakers were Taslima Nasreen, Bangladeshi writer in exile, winner of the European Parliament Sakharov Prize 1994; Anuradha Koirala (photo to the left), awarded CNN Hero 2010 for her impressive work against human trafficking in Nepal – more information about Ms. Koirala and her organisation Maiti; Shahanur Islam, founder of Justice Makers – a fact finding organisation documenting abuses against minorities and indigenous peoples in Bangladesh; Naveed Walter, president of Human Rights Focus Pakistan, documenting similar abuses in Pakistan; and Ram Chettri, founder of Bhutanese Advocacy Forum, fighting for the rights of the Bhutanese refugees now residing in Nepal and other countries.

During the conference, GHRD presented a joint manifesto on minority rights in South Asia with specific recommendations to the European authorities, which was created during a three days regional symposium in India, Mumbai held one month earlier. It concludes that religious, ethnic, and sexual minorities remain amongst the most vulnerable groups in South Asia, as they are subject to discrimination and human rights violations, including discriminatory laws, land grabbing, attacks against places of worship, businesses and homes, physical and sexual assaults, forced conversions, killings and threats, which largely go unreported by national and international authorities. 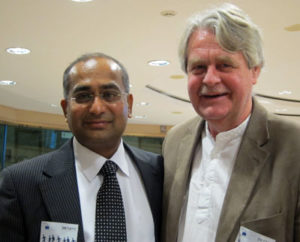 Cecilia Wikström, member of the European Parliament for the liberal group (ALDE) expressed her support for the manifesto and its goals. She has also tabled a priority written question to Catherine Ashton, the European Union’s High Representative  for Foreign Affairs and Security Policy, asking for the creation of a support unit within the new external action service to better involve grassroots human rights defenders in the networks and activities of the External Action Service and European Institutions.

Lars Eklund met Sradhanand Sital, Chairman of the Global Human Rights Defence (seen together on photo), and discussed collaboration with SASNET and Lund University. Already today, GHRD has an agreement with the Human Rights Programme at Lund University to send students every year as volunteers for the organisation. A couple of these were actually assistanst in the organisation of the Brussels conference that was held in the EU Parliament’s Altiero Spinelli Building at Plaza Luxembourg.