After successfully organizing a first explorative workshop in the SASNET South Asia Media Project at Lund University 19–20 October 2015 (read about it), SASNET again arranged a similar explorative workshop this time in New Delhi, India during 7–9 December 2015. Venue: India Habitat Centre, Lodhi Road, New Delhi.
A large crowd of Indian media researchers, journalists and students attended the three-day conference. SASNET was represented by Anna Lindberg, Lars Eklund and Andreas Mattsson.
This year’s workshops have both focused on Indian media, but in the future the project will also cover other countries in South Asia. The aim of the workshops is to bring Indian and South Asian media researchers and journalists together to seek new ways of working with future challenges and also to highlight possible projects. The project is coordinated by Andreas Mattsson. 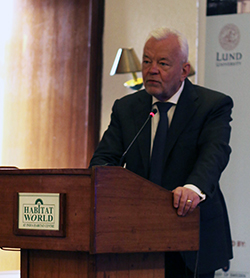 Three intense days filled with panel discussions and presentations was formally inaugurated with a speech by the Swedish Ambassador to India, Mr. Harald Sandberg,(photo to the right) and a welcome note by SASNET Director Anna Lindberg.

On the first day, Monday 7 December, a number of sessions were held on topics dealing with journalists’ working conditions in Sweden and India, Online Ethics, Gender in Media and Innovation in Media. Andreas Mattsson and his colleague Ola Isaksson from the Dept. of Comunication and Media at Lund University led the first session on ”The Digital Change in Swedish Newsrooms”.
They described the current situation where 25% of journalists in Sweden lost their jobs in last few years, and this is happening because of digital transition. Many journalists instead join PR agencies, advertising agencies, and corporate communication jobs. Traditional media are trying hard to transform themselves into new media. Many platforms on mobile are emerging and citizen journalism is outcome of some of these innovations. Today’s times are interesting times which are throwing up opportunities for constructing social media for citizens. Context is clearly the rising internet penetration – 93% of all Swedes being internet  users. The audience to a large extent consisting of media students came up with lots of intelligent comments and questions, based on their Indian experiences.

The second session was focusing on Security and Integrity, when Swedish free lance journalist Hanna Rydén (photo to the left) narrated her experiences of being a reporter in India and Sweden, with fascinating stories to tell.

Apart from serious issues of independent/freelance journalism, she also discussed the issue of ”fixers”, as they are generaly known. Fixers are actually local journalists who know the language, and culture and who have access to many resources and awareness of local topography which often foreign correspondents lack and are ignorant about. It is in a way tragic symbol of north south divide or subtle racism that local vernacular journalists get used and mostly do not get any recognition for their contribution to build the foreign correspondents’ articles. Hanna argued strongly that these local journalists should be treated as equal partners.

The third session focused on Diversity and Gender in the Newsroom, with Swedish media researcher Mia-Marie Hammarlin from Lund University, and Indian journalist Shweta Punj working for Business Today. It was an interesting discussion on the inherent bias against female journalists in many media establishments, and also on how newsrooms in India and abroad have started processing surveillance on their employees and journalists working in their newsroom. Increasingly media  organizations have been sounding word of caution to their employee journalists about what type of content they should relay on their personal Twitter/FB accounts because they don’t wish to identify with content on their employees’ walls or in their feeds.

The final session on first day focused on journalists’ working conditions, and involved a discussion between Andreas Mattsson and Ola Iskasson from Lund University, and Indian independent reporter Priyanka Borpujari, based in both Mumbai and Guwahati.

The second day of the workshop started with a most interesting session with students of Media and Communication from both Sweden and India. The Swedish students coming from Lund University (but at the time being exchange students at University of Kerala through a Linnaeus Palme collaboration agreement) were Oscar Schau and Josefin Wennäng, and the Indian students were Susan Koshy and Garima Upadhyay, both from Jamia Milia Islamia University in Delhi. The session was entitled ”An outlook of the future media landscape”, and was moderated by Andreas Mattsson.
In he dicussion that followed, it was clear that new media play a defining role in investigative journalism. Blogs, Vlogs, Instagram, Youtube channels and other platforms for packaging information are crucial. Access is changing, technology is changing and also innovative ways of adopting/adapting to the opportunities of civic awareness and social change.

Next followed a session on ”Power Relations Between Professional Sources and News Journalists: Old and New Challenges”, which consisted of a lecture by Jesper Falkheimer, Professor in Strategic Communication and Rector for Campus Helsingborg at Lund University; and after that Mia-Marie Hammarlin introduced a discussion on ”Mediated scandals”, about scams and political scandals in Sweden, an issue on which she has just published a book. This excting topic caused a lively debate since corruption with scams and scandals on a much bigger level is common-day practice in India.

After lunch followed another two interesting sessions, the first focusing on ”Digital Security and Journalism”, consisting of a discussion between Nayantara Ranganathan from the Indian Internet Democracy Project; and Måns Svensson, Associate Professor at the Division of Sociology of Law, but also Director of the Centre for Work, Technology and Social Change (WTS) and Director of Research at Lund University Internet Institute (LUii). (Besides, Måns Svensson is a new member of SASNET’s board from 1 January 2016). The discussion was moderated by journalist Divya Rajagopal from the Economic Times.

The next session was devoted to the issue of ”What are our Future Digital Challenges?” featuring Abhinandan Sekhri from the organisation Newslaundry, along with Andreas Matttson, and with Vibodh Parthasarathi, Professor of Mass Commmunication at the Centre for Culture Media & Governance (CCMG), Jamia Millia Islamia University in Delhi as moderator.

The third and final day of the Delhi workshop was co-hosted by the Centre for Work, Technology and Social Change (WTS) and Lund University Commissioned Education(LUCE), and was devoted to panel discussions, lecturers and workshops about how social innovations and technology creates change. WTS Director Måns Svensson held an introductory speech, after which the charismatic Osama Manzar representing the Digital Empowerment Foundation (DefIndia) entered the stage and held a most informative lecture on ”Social Innovation in a Digital Context – Challenges and Opportunities”, focusing on the fast growing use of Internet in India, but also about the divide between those who have good access and those people who have no access at all. Real darkness of country is that more than 70% women cannot access mobile phones in India. More than 90% of schools do not have access to internet. More than 95% of health centers do not have access to telephone and internet.  Syed Ali Abbas participated via Skype.

This was followed by a presentation by three participants to the Social Innovation in a Digital Context (SIDC) run by Lund University’ Internet Institute in Landskrona since a few years back. Two of the Lund University alumnis were present in the hall, namely Saloni Malhotra and Diva Rajagopal. Malhotra presented her project entitled Safecity, and Rajagopal her project entitled WhyHate.
The third alumni to present a project was Syed Ali Abbas from Pakistan, who unfortunately could not be present in the hall due to problems to secure an Indian visa, but instead presented his project via Skype. Abbas was the founding chairperson of the Pakistan Youth Alliance and affiliated with Khudi Pakistan, a counter extremism social movement in Pakistan. 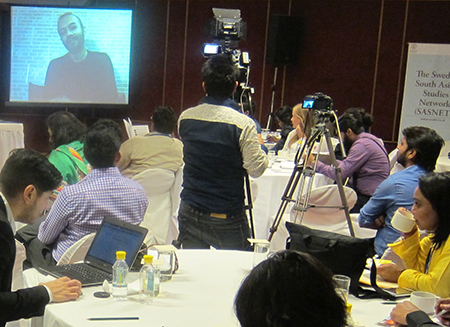 The final session on the theme of Social Innovation in an Indian Digital Context featured two entrepreneurs, namely Manisha Senguptafrom Start Up!; and Madhu Singh Sirohi from Vodafone Foundation. Andreas Mattsson was again the moderator.Anna Lindberg with Ashok Sajjanhar

The final point on the workshop schedule consisted of prize award ceremony. Before the workshop, the Centre for Work, Technology and Social Change (WTR) and SASNET had decided to award INR 100,000 (1 Lakh) to one enterprise or individual from India for their work in social innovation in a digital context (more information).
The winning candidate to this #innovationforgood award, as it was called, was the organisation Factly, represented by its founder Rakesh Reddy Dubbudu. Factly receives the prize for its innovative approach of factually storytelling and representing public data in a easily consumable format for the digital platform and audience.
Two other applications were also awarded honorary prizes; Amrit Sharma for the India Loves Pakistan project, and Meera Krishnamoorthy for the the Citizen Matters Media Platform for its creation of an innovative and value sensitive approach to journalism.

In the evening of 9 December 2015, the Swedish Embassy organised a reception held at the residence of Daniel Wolvén, Minister Counsellor & Deputy Head of Mission. Besides the participants at the Media workshop, several other academics from the universitites and research institutions in or near Delhi had been invited by SASNET.
They all had some connection to Sweden, either being alumni scholars; former guest professors such as Dhruv Raina – Professor in History and Philosophy of Science and Education at Zakir Husain Centre for Educational Studies, Jawaharlal Nehru University, but with a past a University of Gothenburg; recent scholarship holders such as Pfokrelo Kapesa, PhD candidate at JNU and a participant in the 2015 Swedish Institute programme Young Connectors for the Future; or collaborative partners in Indo-Swedish academic programmes.
And among the guest also the former Ambassador of India to Sweden, Mr. Ashok Sajjanhar who had kindly accepted the invitation to meet his SASNET friends Anna Lindberg and Lars Eklund. 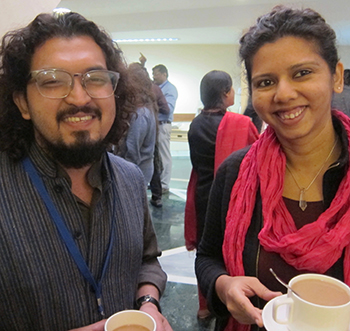