Systematics is one of the oldest disciplines at Uppsala University, following a long tradition that began with Linnaeus and continues to the present. The Systematic Biology program combines the former Systematic Botany and Zoology departments into a single group studying a wide range of topics from alpha-taxonomy to the deepest branches in the tree of life. A combination of traditional and modern techniques are used to study the important topics in modern systematics including taxonomy, molecular evolution, bioinformatics, ethnobotany, conservation and phylogenetic methods.

Magnus Lidén is a plant taxonomist involved in research concerning taxonomy and evolution of the plant family Fumariaceae, which includes the large genus Corydalis (nunneört in Swedish) with a main distribution in the Eastern Himalayas and Southwest China (Corydalis has about 440 species). After having reasonably covered the Chinese and western Himalayan taxa, he has focussed during the last few years on Arunachal Pradesh in the northeastern corner of India. This Himalayan state is today, along with adjoining regions in northern Myanmar (Burma) the last white spot on the Corydalis map, and each visit by botanists result in discoveries of new species – especially on heights above the forest limit, that is around 4.000 metres above sea level.

Magnus specific research interest has brought him into contact with researchers and students at the Center with Potential for Excellence in Biodiversity at Rajiv Gandhi University in the city of Doimukh in the Rono Hills of Papum Pare District close to the Assamese border. Here Magnus is now affiliated as an associated research fellow, and so far Magnus and his Arunachali colleagues have discovered several species new to India, and some even new to science in general, but there is still a lot to do, especially in the Anjaw district and the mountains bordering Burma and East Tibet.

Tana Showren (photo), Professor of History at Rajiv Gandhi University and one of his collaboration partners, happens to be a guest professor at the South Asia Institute (SAI), University of Heidelberg during the fall 2014. SASNET deputy director Lars Eklund met Prof. Showren while visiting SAI in early November 2014 (more information). 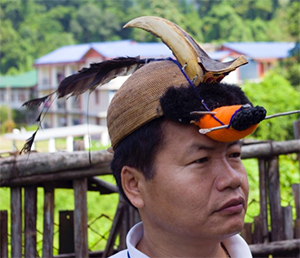 Dr. Lidén is also connected to the National Geographic, and has written several feature articles on Botany in the Himalayas, for example an artice entitled ”High Tide for the Silkworms of Assam” written together with Pankaj Bharali, PhD student in Botany at Rajiv Gandhi University – and hailing from from the Lakhimpur district in Assam with a long-standing experience in small-scale cultivation of muga silk. Read the article.
Recently, in mid-October 2014, he also published a text about a tradition among the Nyishi tribe, one of many Tibeto-Burmese tribes that inhabit the valleys and foothills of the eastern Himalayas, to make ceremonial hats – see photo) – using the bill of the endangered Asian hornbill (Buceros bicornis). However, an ingenious innovation by the Nyishi forest officer Chukhu Loma now enables survival of both tradition and hornbills. Newly produced hats have a plastic bill replica, a change that has been widely accepted by the Nyishi community, thereby saving the birds. Read the article entitled ”A Brighter Future for the Hornbills of India”.