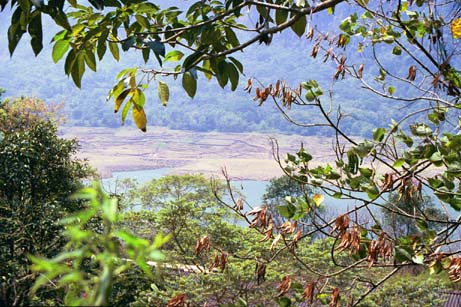 Clas Lindberg is involved in a resarch project on ”Regional development & Poverty alleviation in Sri Lanka” It is a Sida funded co-operation with the Department of Geography, University of Sri Jayawardenapura, Colombo, Sri Lanka.
In two regions, Central and North-Central research is carried out by a multidisciplinary group with a strong basis in geography. The topics range from child labour, schooling and health, to micro enterprises, displaced persons in the conflict areas and landlessness. (Photo from the Kotmale region of Sri Lanka).
Clas Lindberg has also initiated WORD – Working Group on Regional Development – a project in collaboration with colleagues in Sri Lanka, Guatemala, Thailand and Tanzania.

Associate Professor Aida Aragão-Lagergren (previously connected to the Dept. for Geography and Tourism at Karlstad University) is engaged in a study of child labour in the northern and central province in Sri Lanka, ”Children ”left behind”. A study on children of migrant women in Sri Lanka”. In August 2004 she was given a SASNET planning grant for this project. More information.
In November 2004 she was awarded major three-years grants for the period 2005-07, both from Sida/SAREC (see the list of grants recipients) and the Swedish Research Council (Project grant for Research within Humanities and Social Sciences 2004). More information, including an abstract to the project (only in Swedish). 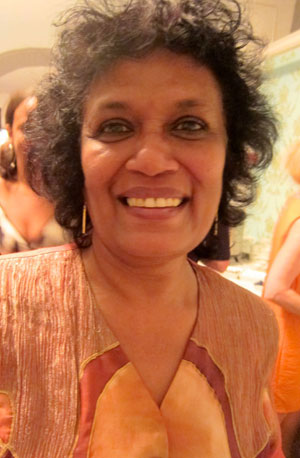 The study drew on earlier studies in Managua, Nicaragua, Central America. The project was carried out in co-operation with Dr. Kumudu Wijewardena from the University of Sri Jayewardenepura (SJP), Sri Lanka (photo to the left). Four doctoral students were also involved in the project.
On 28 January 2003 the SASNET board decided to appoint a number of senior South Asian researchers to a Reference group, for the the root node and the board to consult once in a while about SASNET’s overall aims and activities. Kumudu Wijewardena belonged to the group. More information.

In March 2008, Dr. Aragão-Lagergren visited the SASNET root node office in Lund. She informed about the status of her ongoing research project with Prof. Wijewardena.

Dr. Ingegerd Landström has studied various forms of collaborative coalitions involving state, civic, and private players in political processes in Sri Lanka. On 8 December 2006, she defended her doctoral dissertation titled ”Towards Collaborative Coastal Management in Sri Lanka?: A study of Special Area Management planning in Sri Lanka’s coastal region”, dealing with the efforts on the part of the Sri Lankan government to bring about such collaboration regarding the use of land and natural resources in the coastal areas of Sri Lanka, which were hit by the tsunami in 2004. Faculty opponent was Prof. Erik Westholm, Högskolan Dalarna, Campus Falun.
Abstract: The thesis is concerned with the efforts to bring about a greater degree of local community participation in the use and management of Sri Lanka’s coastal land and natural resources. Through the application of the Special Area Management (SAM) strategy in geographically distinct areas along the coast, the aim is to create collaborative arrangements – partnerships – that will enable coastal communities and local governments to work together with the Sri Lankan state and share responsibility and authority over the management of coastal land and natural resources.
Using a political-geographical perspective that highlights the political and spatial dimensions of this shift in forms for governing the coast, the thesis seeks to identify and discuss factors that can have a bearing on the participatory dimension of collaborative coastal management in Sri Lanka. The thesis focuses particularly on factors influencing the role played by the local communities and the degree to which they actually come to share authority with respect to the use and management of coastal natural resources as envisioned in the SAM strategy.
The thesis illustrates that, despite an ambition to bring about a sharing of authority and control in costal management, this has not quite worked out in practice. Due to circumstances relating both to the SAM strategy itself and to the context in which it is implemented, the degree to which coastal communities have gained any degree of influence with respect to the management of coastal land and resources remains questionable.
The field work was carried out prior to the tsunami that hit the Sri Lankan shores in December 2004. However, given the major reconstruction of Sri Lanka’s coast after the tsunami and the controversy that surrounds it, the issues raised in this thesis are highly relevant.
Dr. Ingegerd Landström has now left the department.

Daniel Alcala Bergquist defended his doctoral dissertation thesis titled ”Colonized Coasts. Aquaculture and Emergy flows in the World System” on Friday 15 February 2008. The study was carried out in collaboration between the department and the Cemus Research Forum (Cefo) at Uppsala University. Faculty opponent was Prof. Örjan Sjöberg, Dept. of Economics, Stockholm University. More information with a link to the full-text thesis.
Abstract: The thesis conceives aquaculture as a transfer of resources within and between different parts of the world system. It is argued that due to inappropriate human-nature interactions, resources tend to flow from the South to the North, as a process of coastal colonisation. To study this resource transfer, coastal aquaculture is ap-proached from a transdisciplinary perspective, integrating natural, social, economic and spatial aspects. By combining world system theory and general systems theory, a systems view is adopted to relate aquaculture to forces of global capitalism, and analyse interactions between social and ecological processes at local and global levels. Emergy (energy memory) synthesis and participatory research methodologies were applied to two cases of aquaculture in Sri Lanka and the Philippines; monocul-ture of the black tiger prawn (Penaeus monodon) and milkfish (Chanos chanos), and polyculture of the two species together with mudcrab (Scylla serrata).
The study reveals that semi-intensive shrimp monoculture in Sri Lanka generates few benefits for poor local people, and depends much on external inputs such as fry, feed and fuels, which implies negative environmental effects at local as well as global levels. Extensive polyculture in the Philippines involves more local people, and implies lower dependence on external inputs. Still, since benefits accrue mostly to elites, and mangroves are negatively affected, neither case is viable for sustainable poverty alleviation. Nevertheless, the study offers several insights into how sustainability assessment may be more transdisciplinary, and points to several factors affecting sustainability and fairness in aquaculture; the most important being mangrove con-version, local people involvement, and dependence on external inputs. Given that mangrove conversion is counteracted, extensive polyculture practices may also prove more viable in times of decreasing resources availability, and if policies are developed that favour resource efficient polyculture, and local small-scale and re-source poor farmers, instead of the global North.

Dr. Bergquist is now fully connected to the Uppsala Centre for Sustainable Development (CDS), and is hoping to pursue research on a project titled ”Towards sustainability and fairness in times of descent”. He presented the proposed project with a paper in a panel on ”Towards sustainable energy systems: sources technologies and consumption” at the Sida-funded conference on current Swedish development research titled ”Meeting Global Challenges in Research Cooperation” that was jointly organised by Uppsala University and the Swedish University of Agricultural Sciences (SLU) in Uppsala 27-29 May 2008 (more information about the conference).
Abstract: Meeting the challenge of climate change is particularly difficult considering society’s dependence on fossil energy. Increasing mechanization means that the need for food and excessive demand for consumer products can only be met by using significant quantities of fossil fuels. As a result, global food production alone contributes to an estimated 20-25% of global CO2 emissions. There is therefore growing scepticism towards the feasibility of continued global economic expansion sustained by essentially finite sources of energy. In addition, it is becoming increasingly apparent that benefits and costs of development are not equally shared. Prioritising short term technological fixes may therefore be counterproductive, in that it shifts focus from the more burning question; i.e. whether exponential growth is possible, or should perhaps be replaced with new strategies for de-growth and fairer resource sharing. Systems theories generally accept that a period of descent in terms of energy consumption is to expect. However, conventional economic and neo-liberal ways for production and exchange on the global market often underestimate the environmental and human support. This calls for new approaches for addressing resource limits in development, and for emphasising sustainability and fairness aspects of production and consumption simultaneously. This presentation draws on a paper presented at the De-growth conference in Paris, proposing emergy (energy memory) synthesis as such an approach. The paper departs from experiences in Asian aquaculture, to exemplify how and why value is underestimated in contemporary global trade, and for illuminating and quantifying some morally and ecologically questionable aspects of global capitalism, after which some potential measures for making production, consumption and trade more fair and sustainable in the future are discussed.

Since 2011, PhD candidate Sara Lång works on a doctoral dissertation project entitled ”Local communities and global worlds –Negotiating life chances through the lens of education”. Her supervisors are Danielle van der Burgt and Brett Christophers. It is a comparative project focusing on Sweden and the state of Kerala in India. Field work will be carried out in Kerala during 2012 and 2013, and hopefully end up in a paper (part of the thesis) with the working title ”Being a part of a growing economy: Looking into the future through the eyes of young people in Kerala, the ‘educational riddle of India’”.
Sara has experiences from internship work at tUNESCO and OECD, and for her Masters degree she made a similar field study in Kampala, Uganda.

AIEA, headed by Professor Lennart Strömquist, is also part of the Dept. of Social and Cultural Geography. More information on separate SASNET presentation page.
In February 2007, AIEA organised a field-based workshop entitled ”Participatory GIS; a tool for planning of rehabilitation of communities affected by natural disasters” in the Rekawa lagoon in Hambantota district, Sri Lanka, an area heavily affected by the tsunami in 2004. The workshop was partly funded by a SASNET interdisciplinary workshop grant that was granted to Prof. Strömquist in August 2006. See the full list of SASNET planning grants 2006.
The workshop was supposed to take place in November 2006, but due to the political situation in Sri Lanka it was postponed till February 2007. However, due to the changes in time some participants, including Prof. Strömquist himself, could not take part. The Swedish participants in the workshop were instead Dr. Claes Lindberg, and then PhD candidate Daniel Bergquist from the Dept. of Social and Cultural Geography; and Dr. Louise Simonsson from the Centre for Climate Science and Policy Research, Linköping University at Campus Norrköping. The remaining participants were researchers and students from the National Aquatic Resources Research & Development Agency (NARA) and Sri Jayewardenapura University in Colombo. More information.