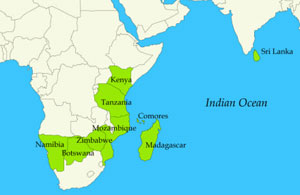 Paul Sinclair is Professor of African Archaeology, and has been particularly interested in evidence based spatial analysis of material culture distributions in regional and landscape perspectives. He has worked on socio-environmental interactions in farming community and urban contexts in the central African and Indian Ocean regions. The complexity of linear and non-linear processes operating in multi-scalar contexts underline the need for joint research teams and therefore he has been engaged in comparative work in Mozambique, Madagascar and Sri Lanka. Prof. Sinclair has also been involved in re-thinking the role of Africa in the Indian Ocean trading networks resulting from the recent identification of 1st millennium BC Harappan and early Buddhist ceramics on the coast of East Africa. 400 dated sites from the last 12 000 years are viewed in time series in relation to soils and vegetation covers and provide a comparative basis for comparison with similar data from the Amazon region and from South East Asia.

Profesor Paul Sinclair has carried out research in Sri Lanka during long time, see information below about the Sri Lanka projects.
He is still involved in South Asia related research, currently involved a study of Cut Coral Mosques in the Maldives and comparisons with other parts of the Indian Ocean.

Professor Neil Price is working on projects concerning the global commodities exchange of the early modern period. In particular he investigates the opium trade, examining its more obscure byways and collateral effects. A second subject of interest is the historical archaeology of piracy, seen in a global perspective. Although he is not researching any South Asian countries directly, the above projects are both intensely concerned with the Indian Ocean world in general, and by extension the societies at its core.

Paul Lane is Professor of Global Archaeology. His current research explores the archaeology and history of ivory, enslavement and cloth in eastern Africa and links with merchants, mercenaries and other actors from the Indian sub-continent. The focus is mostly on these diaspora communities in eastern Africa, but he plans to extend research to the Indian sub-continent in the future. 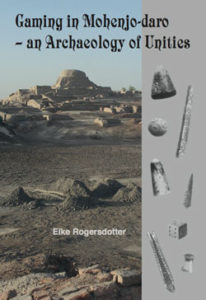 Dr. Elke Rogersdotter defended her doctoral dissertation at the Department of Historical Studies at University of Gothenburg on Saturday 5 February 2011, with a thesis entitled ”Gaming in Mohenjo-daro – an Archaeology of Unities”. The faculty opponent was Dr. Eva Myrdal, the Museum of Far Eastern Antiquities, Stockholm. The thesis dealt with the traditionally neglected concept of ’play and pleasure’ and its impact on past social structures. The thesis examines game-related finds with the aim of reaching and discussing the social influence of the dimension of play in an ancient settlement. The finds originate from the Bronze Age Indus Valley settlement of Mohenjo-daro in Sindh, Pakistan, the largest, urban settlement of the Bronze Age Indus Valley cultural complex (Integration Era ca. 2600-1900 BC). The site has produced a number of game-related artefacts (dice, gaming pieces and others). Selected finds have been analyzed through museum studies in Karachi and Mohenjo Daro, as well as via elderly, written sources such as field reports. Read the full-textdoctoral thesis.
The study also involved a field documentation of engraved game boards at the ancient site of Vijayanagara (Karnataka, India), the ruined capital of the Hindu empire Vijayanagara (ca. 1350-1565 AD). This study was conducted within the framwork of the Vijayanagara Research Project (VRP).

Now working as a post-doc at Uppsala University, she continues with the themes of her previous, PhD- and licentiate works, which were based on game-related finds from the Indus Valley settlement of Mohenjo-daro in Sindh, Pakistan, and material remains of children’s play found in the Harappan settlement at Bagasra in Gujarat, India, respectively. Main theoretical perspectives are borrowed from play- and game theory, social theory, and philosophy of science.

Elke Rogersdotter defended her licentiate thesis on the same issue at the Dept.of Archaeology, Umeå University on 14 March 2006. Parts of the thesis were included in a university lecture on Harappan and Gandharan toy- and play artefacts held at the Hazara University, Mansehra, NWFP, Pakistan, June 2007. In a slightly revised form as to language and content, the licentiate thesis was published as a book in July 2008 by the German publishing house VDM Verlag Dr. Müller under the title:  Socializing Children’s Toys: An Archaeological Inquiry into Third Millennium BC Harappan Terracotta Remains from Gujarat, India. The collecting and preliminary analysis of relevant material was made possible by contacting and visiting the Dept. of Archaeology at the Deccan College in Pune, as well as at Dept. of Archaeology and Ancient History, Maharaja Sayajirao University in Baroda. The work was carried out particularly under the supervision of Dr Vasant Shinde (at the Deccan College), and Prof. Kuldeep K. Bhan, Dr K. Krishnan and Dr. P Ajithprasad (at the Maharaja Sayajirao University). Dr Ajithprasad has acted as one of the co-advisors during the writing up of the thesis.
She has also got assistance from Professor Emeritus Asko Parpola, Institute for Asian and African Studies, University of Helsinki, Finland, and Prof. Mark Kenoyer, Dept. of Anthropology, University of Wisconsin, Madison. Prof. Kenoyer is Head of the Harappa Archaeological Research Project, begun in 1986 as a long term program of investigations into the origins and character of Indus urban centers (it is the first multidisciplinary excavation of an ancient Indus urban center and involves scholars from all over the world).

From the beginning of the 1990s, the unit for African and Comparative Archaeology at the Dept. of Archaeology and Ancient History in Uppsala cooperated with the Post-Graduate Institute of Archaeological Research (PGIAR), at the University of Kelaniya, Sri Lanka. A bilateral SAREC supported research project called ”The Archaeology of Southern Sri Lanka”, was initiated in 1994, which was part of the larger worldwide HRAC project (Human Responses and Contributions to Environmental Change that was running during the period 1994–1997).
Prof. Paul Sinclair was the director/coordinator for the project. The Dept. of Physical Geography and Quaternary Geology at Stockholm University was also involved in the project.

The research themes were:

Dr. Raj Somadeva (photo to the right) defended his doctoral thesis on ”Urban Origins in Southern Sri Lanka” on Wednesday 25 January 2006. The study focuses upon the development of urbanisation in southern Sri Lanka during the proto, early and late historical periods c. 900 BC onwards, and confirms the Dipavamsa and Mahavamsa historical chronicles compiled c.400-500 A.D in showing that the southern semi-arid zones of Sri Lanka have maintained a distinct socio-political character throughout Sri Lankan history. Faculty opponent was Dr Sunil Gupta, Director for the Indian Ocean Research Centre in New Delhi, India. More information with abstract.
The Swedish researchers were formally involved in the project functions as PhD supervisors or trainers for the PGIAR researchers. Prof. Paul Sinclair supervised the PGIAR researchers who were registered in Uppsala (Somadeva, Thantilage and Adikari), whereas Prof. Urve Miller and Dr. Jan Risberg of the Department of Quaternary Research, Stockholm University supervised the paleo-environmental work of Premathilake. Gamini Adikari, working on marine resource exploitation, also received supervision in specialised biological theory and osteological applications by Prof. Jan Ekman of the Dept. of Evolutionary Biology, Uppsala University.
Raj Somadeva is now working as Senior Lecturer and Professor in Archaeology at the Postgraduate Institute of Archaeology in Sri Lanka. More information from his personal web page.

In August 2003, the Dept. of Archaeology and Ancient History organized a Symposium on ”Urban Landscape Dynamics and Resource Use”. The symposium, co-organized by the Collegium for Development Studies (CDS) at Uppsala University, aimed at synthesizing and formulating a proposal on ”Urban Landscape Dynamics: a Framework for South-South-South co-operation” to be put for consideration by the Swedish Agency for Research Cooperation with Developing Countries (SAREC) research committee by 30th October 2003. This was a follow-up to a decision by Sida/SAREC’s board in September 2001 to support the idea of organizing an International conference on this theme, with Third World researchers. SAREC granted funding for a planning year for the African component in 2002. Additional consultations were initiated with colleagues from other parts of the South, including researchers from the Post Graduate Institute of Archaeology in Sri Lanka. Elisabet Green, the Information Officer at the department organized the symposium.

In April 2008, the Swedish Foundation for Strategic Environmental Research (MISTRA) decided to award SEK 5.1 million as a so-called Idea Support Grant to a project coordinated by professors Paul Sinclair and Gullög Nordquist, both at the Dept. of Archaeology and Ancient History. 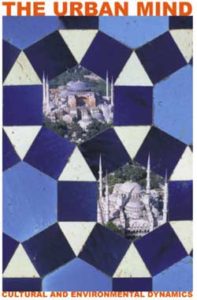 The two-year research project (2008-09) was entitled ”The Urban Mind: Cultural and Environmental Dynamics”, and involved researchers from several divisions within the department (African and Comparative Archaeology; Archeology; Classical Archaeology and Ancient History; and Egyptology), as well as other Uppsala University departments (Art History; History of Ideas; Philology and Linguistics – including Assyriology, Byzantine Studies, Iranian Languages, Turkish Languages and Semitic Languages/Arabic). The project finally involved researchers at Stockholm University (Dept. of Physical Geography and Quaternary Geology); and the Royal Institute of Technology, KTH (School of Architecture and the Built Environmen). The project derived a new concept, the ‘Urban Mind’, from combined humanities and natural science studies of the development of urbanism and climate change in the Middle East. A total number of 40 scholars formulated the concept as part of the IHOPE (Integrated History and future of Peoples on Earth) initiative. The concept was assessed with a specific case study: Byzantium-Istanbul, but the global relevance of the Urban Mind concept will be illustrated with ongoing studies of cognitive aspects of urbanism and climate change in Africa, Eurasia (including South Asia) and the Americas.
Among the research frames being proposed, a few touch specifically upon South Asia. In a planned study on ”Contact induced language change”, the researchers Dr. Christine Schäfer, Prof Éva Csató Johanson, and Prof Jan Olof Rosenqvist, focused on the overland long-distance trade and intellectual exchange between large population centres characterize the 1st millennium CE. The Silk Road is a case in point and its oasis cities have archived thousands of manuscript. This material attests to the deep-rooted cultural, religious and linguistic diversity of these urban centres and to the complex, merged and balanced character of their subsistence, ideology and literacy. Among several religions flourishing in these centres, Buddhism plays a crucial part spreading with speakers of Tocharian from Northern India attracting and uniting various population groups, e.g. in the city of Turfan. When Tocharian is introduced into this urban linguistic ecology, the reaction is an intriguing example of the capacity of the Urban Mind: a language showing all the Indo-European morphological elements adapts the architecture of its verbal categories and some syntactic features from decidedly non-Indo-European languages.
In another research frame on ”Global Implications of the Urban Mind Coord”, coordinated by Prof. Sinclair, researchers were supposed to review the world-views behind three key spheres of urban development at the Old World frontier, looking at northern Europe, Eurasia and the colonial encounter on the eastern seaboard of North America.