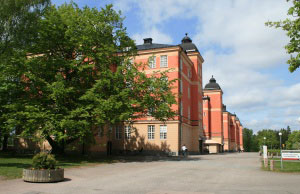 The Centre for Image Analysis (CBA) is a collaboration between Uppsala University and the Swedish University of Agricultural Sciences (SLU). The purpose is to conduct research and education in computerized image analysis and perceptualization. Both within image processing itself and to develop better methods, algorithms and systems for applications within primarily biomedicine and forest industry. At CBA about 30 researchers are working together in various projects.

Since 2009, the Centre for Image Analysis collaborates on a project concerning Cervical Cancer detection (CerviSCAN) with the Centre for Development of Advanced Computing (C-DAC), and the Regional Cancer Centre (RCC), in Thiruvananthapuram, Kerala, India. In December 2009, they jointly organised an Indo-Swedish Workshop on “Medical Image Analysis for Early Detection of Cervical Cancer” in Thiruvananthapuram, a workshop that was organized under the strategic Indo-Swedish technical collaboration agreement between the Department of Information Technology (DIT) and the Swedish Governmental Agency for Innovation System (VINNOVA). On the 9th of December 2009, a Memorandum of Agreement was signed between C-DAC (T) and Uppsala University, Sweden formalizing the collaboration.
Three more joint workshops were held:
– 24–30 September 2010 at Uppsala University with participation by Dr. Rajesh Kumar and Dr. Ravindra Kumar, both from C-DAC in Thiruvananthapuram, Dr. K Sujathan from RCC, and around a dozen researchers from CBA.
–  30 December 2010 – 11 January 2011 in Thiruvananthapuram. Participants Ewert Bengtsson from CBA, plus about 10 persons from CDAC, and 3 persons from RCC.
– 14–20 October 2011 in Uppsala, with Rajesh Kumar, Salam Sibi and Pundluvalu Nataraju Sharathkumar from CDAC, Andrew Mehnert from Chalmers, and about 10 researchers from CBA.
At all the workshops the topic have been related to detection of early stages of cervical cancer from cell specimens, ranging from basic scientific approaches to practical aspects of how to implement the algorithms in hardware and software.

The main collaboration partner on the Indian side is Dr. Rajesh Kumar at C-DAC in Thiruvananthapuram.
Project abstract: Cervical cancer is killing a quarter million women every year. Most of these deaths could be prevented if population screening programs similar to those in operation in most western countries were in operation world wide. CBA collaborates with the Centre for Development of Advanced Computing and RCC to develop an image analysis system for PAP-stained cell samples from cervical cancer screening so that early malignancy associated changes and atypical cells can be detected and used as a basis for a new kind of computer assisted screening device suitable for wide deployment in developing countries like India. The project has now reached a stage where intensified contacts are necessary in order to integrate the developed system components and field-test them at the Regional Cancer Centre.