The Department has been involved in a collaboration project with the School of Environmental Sciences at Jawaharlal Nehru University (JNU) in New Delhi, India. Rajinder Saxena was in charge of the collaboration, funded by Linnaeus Palme exchange programme grants, at Uppsala University. He made a preparatory journey to India in 2002 and later returned and worked for three weeks as a guest lecturer at JNU on the issue of Groundwater and the flow of pollution in groundwater.
At JNU Professor Vaidyanatha Subramanian (photo to the right) och Associate Professor AL. Ramanathan are the key persons. Subramaniam similarly came to Uppsala and worked as a guest lecturer in Hydrochemistry for three weeks during late 2003, followed by Ramanathan in October 2004.
The exchange programme also involved students. Two Indian students spent one semester in Uppsala in 2003, two Swedish students went to JNU in the Spring 2004, and two Indian students studied at the department in Uppsala. In the Spring 2005 Saxena’s colleague Associate professor Roger Herbert went to JNU and lectured on Geochemistry for three weeks, and Swedish students were supposed to spend a semester there.
The School of Environmental Sciences at JNU was established in 1974. It has a diversified interest in various earth, atmospheric and biological processes. Linkages between Ecological and social processes give an additional dimension to the School’s interest. More information on the School of Environmental Sciences. 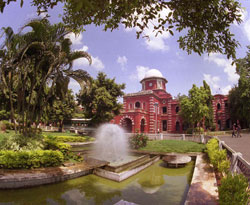 In 1995 an Indian Biogeochemistry research data base on the Internet, called the ENVIS (Environmental Information System) Centre in Biogeochemistry, was created at the School. It gives useful information on the situation regarding Fresh water resources, geochemical aspects of river systems and lakes, and the pollution levels of Arsenic, Fluoride, and Mercury in India. ENVIS also organises conferences. More information on ENVIS.

Since 2006, the Department of Earth Sciences is involved in a new Linnaus Palme grant to establish teachers and students exchange with Anna Universityin Chennai (photo) instead. The Indian contact person in the exchange programme is Professor Ramachandran Ramesh, Director for the Institute for Ocean Management, Anna University.
The project has received continued funding for the period 2013-14 with SEK 243 176. More information about the South Asia related Linnaeus Palme projects for 2013-14.