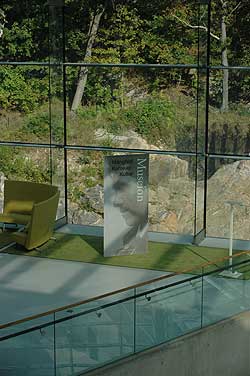 Museion is a Göteborg University program, co-operating with several University departments and the new Museum of World Culture (Världskulturmuseet). It was started with the view to integrate research with education and public presentations. It has a global and interdisciplinary focus. Since 8 August 2005 Museion is located within the premises of the new built Museum of World Culture, with which Museion is closely connected.

In close collaboration with the Museum of World Culture Museion runs a two year (80 credit points) Masters programme in International Museum Studies. Of the thirty study places in the programme, fifteen are reserved for students from abroad. This international education is aimed at students from all over the world who wish to pursue a career in the museum sector. The programme is a post-graduate training of 😯 credit units (two academic years), which combines theory and practice through taught courses, qualified work experience in the museum sector and the writing of a Master´s dissertation. The students are required to have (or to obtain) a Bachelors Degree and are admitted to the programme as a whole. After successful completion students are awarded a Master’s Degree in International Museum Studies. The programme runs every other year. A new course started in the Fall 2008. More information on the Master’s programme.

Museion also offers under graduate courses on subjects that aims to reflect the circumstances that people live under in the globalized world of today. These courses, all taught in Swedish, are collected under three overarching themes, namely • Globalization; • Power and Marginalization; and • Knowledge and Communication. Several of these courses partly deal with South Asian issues, for example:

During the Spring 2009, Museion also offers another South Asia related course under the theme ”Power and Marginalisation”.
‡ A 15 credits course on Power, Resistance and Change 1 (Makt, motstånd och förändring I). Contact person: Dr. Stellan Vinthagen, from the Dept. of Peace and Development Studies (PADRIGU), School of Global Studies, Göteborg University. More information about the course.

In the Fall 2007, Museion at Göteborg University also arranged a 15 credits course titled Tales of Objects: between traditions and modernities in India and China (Föremålen berättar: mellan traditioner och moderniteter i Indien och Kina). The course aimed at providing tools for understanding visual culture and its role. The work material consisted of objects from the collections of the Museum of World Culture, combined with modern ethnographic material, through which aspects of ancient and contemporary Indian and Chinese culture and society was studied. The course was led by the Sinologist Marie Carlsson and Dr. Eva Rosén-Hockersmith from the Dept. of Religous Studies and Theology, Göteborg University.

Museion conducts research in close collaboratioin with the Museum of World Culture and its exhibitions. Anthologies have for example been published as part of the exhibitions ”Horizons – perspecitves on a global Africa” and ”No name fever – AIDS in the age of globalization”. In connection with an exhibition on trafficking, Museion researchers have studied trade with archeological objects as well as the debate on trafficking in Sweden. From autumn 2005 Peter Davis is a guest professor at Museion. He holds a professorship in museology at Newcastle University, UK, where he also was director of the School of Arts and Cultures until 2005. His main task at Museion will be to form a new research profile for the department.

The archeologist Eva Myrdal was connected to Museion until 2002. She has been involved in research on South Asia, especially in Sri Lanka, for many years. The research includes a project called ”Comparative studies of production processes in certain marginal areas in South Asia and North Europe”, where she compared research data on the use and control of forest resources in the Swedish province of Värmland, and the dry areas of Sri Lanka. The project has included research collaboration with the Postgraduate Institute of Archaeology at Kelaniya University in Sri Lanka.

On the Research Conference ”Structures of Vulnerability” held at Stockholm University 12–14 January 2005 Eva Myrdal chaired a panel on ”Cultural Heritage and Sustainability in long-term Perspective”, where she also presented her own research paper on ”The Archaeology of Colonial Warfare. Changing Land-use Patterns in Sri Lanka in its 19th century”.

Since 2003 Eva Myrdal is Head of Unit Research and Development at the s at Skeppsholmen in Stockholm. This is the museum in Sweden which has the main responsibility of presenting Asia to the Swedish public (apart from the Near East). It manages archaeological collections from China, South-East, Central and South Asia. Apart from this one major focus of the collection is on Buddhist East and South East Asia but it also contains Buddhist and Hindu sculptures and bronzes from India, as well as a small collection of Mughal paintings.
Eva Myrdal and the museum director Magnus Fiskesjö have been engaged in making a collection of 1 500 years old artefacts from the settlement site Rang Mahal in Rajasthan, India, available to the public. The artefacts were found by an Indo-Swedish archeological team headed by Hanna Rydh in the 1950’s, but has so far not been exposed. In October 2003 Myrdal and Fiskesjö published an article on this in SYDASIEN 3/03. Go for the article ”Impressive finds from ancient rice farmers” (in Swedish only).