Marine Geology is a part of the Department of Earth Sciences, in which is also included the subjects of Oceanography, Physical Geography and Geology.

Research at the department connected to South Asia:

Dr. Johan Burman defended his doctoral dissertation on ”Stable Oxygen and Carbon Isotopes in Recent and Subfossil Littorinidae Shells – a high resolution method for paleoenvironmental reconstructions” on Friday 2 June 2006. Faculty opponent was Associate Professor Dan Hammarlund, Dept. of Geology, Lund University. The research deals with stable isotopes using gastropods as a tool to deduce present and past (paleo)-monsoon variability, and the the thesis consists of five papers and manuscripts. Read an abstract of the thesis (as a pdf-file).

One of the papers dealt with material from the Indian Ocean. This part of the project was carried out during 2004-05, in collaboration with Dr Divakar P Naidu, National Institute of Oceanography, Dona Paula, Goa, India and Professor Birger Schmitz, Lund University, Sweden. In November 2003 they received SEK 300 000 as a grant from Sida/SAREC to carry out this project, then titled ”Marine gastropod intrashell stable isotope records as a tool to deduce Holocene monsoon variability along the South-West coast of India”. 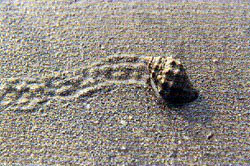 The aim was to apply a new high-sensitivity method to reconstruct intra-annual temperature and salinity variations, and apply it in reconstructions of monsoon variability across the Arabian Sea. In the research group it was shown that by establishing intrashell stable isotopic ò18 O profiles from marine gastropod shells (Littoraria undulata, photo to the right), time-resolution improves towards a seasonal precision. By comparing seasonal isotopic records of recent and mid-Holocene (7 000-5 000 B.P.) shells, they contributed a completely new perspective on SST (sea surface temperature) and SSS (sea surface salinity) changes in the southeast Arabian Sea and its relation to regional monsoon variability. Such SST and SSS data will provide the basis for refined modelling of the response of the monsoon system to future potential greenhouse conditions.

In June 2007, Dr. Burman received SEK 935 000 as a three-years grant (2007–09) for an application to the Joint Formas – Sida/SAREC programme for research on sustainable development in developing countries, for a project titled ”Indian paleomonsoon dynamics; linking high-resolution terrestrial and marine records”. More information on the project(only in Swedish). This project is also carried out in collaboration with Dr. Divakar Naidu at the National Institute of Oceanography in Goa, India. Johan Burman presented the project in a panel on ”Climate change and future scenarios in poor countries” at the Sida-funded conference on current Swedish development research titled ”Meeting Global Challenges in Research Cooperation” that was jointly organised by Uppsala University and the Swedish University of Agricultural Sciences (SLU) in Uppsala 27-29 May 2008 (more information about the conference).

Abstract to project: The Indian monsoon system is an important component of the global climate and has unparalleled societal impact for people’s life in the region. Our ability to forecast the monsoon intensity depends on the understanding of recent atmospheric and oceanographic settings. It is necessary to develop highly reliable proxies, which can enable enhanced palaeointerpretations, especially on short time-scales. If we are to understand the background of natural variability underlying anthropogenic climate change, it is important to concentrate on climate of the past.
Thus, an increased understanding of climate variability on Earth during the Holocene period is crucial in order to predict the future climate. In this context, oxygen and carbon isotopic analyses of the intertidal gastropod Littoraria undulata were carried out from southwest India, in order to reconstruct intra-annual monsoon signals and sea-surface temperatures. The average resolution in the aragonite shells of Littoraria undulata was determined to 4 days per sample, based on a tag and release experiment that showed growth rates of ca. 0.15 mm per day–1. The gastropod shells from south Karnataka (13°N) displayed a seasonal δ13C shift of 3‰ and enriched values during the post monsoon season. This indicated increased surface-water productivity by primary producers, linked to seasonal upwelling. In contrast, gastropod shells from Goa (15°N) showed depleted δ13C values, pointing towards less pronounced upwelling intensity in the coastal zone of this region. Reconstructed modern mean annual sea-surface temperatures derived from δ18O fractionation in the Littoraria undulata shells deviated less than 0.6 °C compared with observed values, and showed an overall precision of ±0.8 °C. Tentative results suggest that carbonate δ18O and δ13C values of the intertidal gastropod Littoraria undulata, can be used as a proxy for seasonality studies in the Arabian Sea. In a future perspective, similar assessments of mean annual sea-surface temperature and seasonal upwelling and its relation to the strenght of the south-west monsoon can be made from either Littoraria undulata or related species in fossil records. This first step in developing a proxy stable isotope method through analyses of gastropod shells in recent times, open up new opportunities for alaeointerpretation of the climatic system of south India.