Department of Sociology and Work Science, University of Gothenburg

Prof. Annika Härenstam has been a professor at the department since 2007. Before that she was Professor in Work Organization, MTO, at the National Institute for Working Life in Stockholm (NIWL), an institution that closed down in 2007. At NIWL, researchers were actively working with India related projects, and these contacts have now shifted over to University of Gothenburg. More information about the India projects at NIWL.

The Dept of Work Science has been intensely involved in efforts to form a new network entitled SIGN – the Sweden India Gender Network in Work, Environment and Health, that received initial funding from the Swedish International Development Cooperation Agency, Sida in 2010. Two years later, in late February 2012, Sida decided to grant funding for the new network with  SEK 3 m as a Partner Driven Cooperation grant (more information)

A formative meeting was held in Gothenburg in early June 2011. As a first step, SIGN had invited researchers from related fields to discuss potential research cooperation/collaboration at this meeting that was attended by 25 researchers.
Besides Prof. Annika Härenstam, the main Swedish networking partners are Dr. Birgitta Jordansson, Head of department, Dept. of Work Science; Associate Professor Hanna Westberg, previously researcher at the National Institute for Working Life (NIWL) in Stockholm; and Dr. Karin Allard, Dept. of Psychology, University of Gothenburg.
The Indian main coordinators are Associate Professor Sunita Kaistha from Jesus & Mary College in New Delhi, and Dr. Amita Sahaya, founder secretary of the New Delhi based non-profit organisation Women Work & Health Initiative (WWHI). Dr. Kaistha also happens to be the WWHI President.
Other Indian partners in the network are Professor Surinder Jaswal from Tata Institute of Social Sciences (TISS) in Mumbai (also a partner in the Go:India project that also was launched in early June 2011 with a kick-off conference in Gothenburg – more information), Professor Vibhuti Patel, Shreemati Nathibai Damodar Thackersey Women’s University (SNDT) in Mumbai, and Professor Urmi Nanda Biswas, University of Baroda. 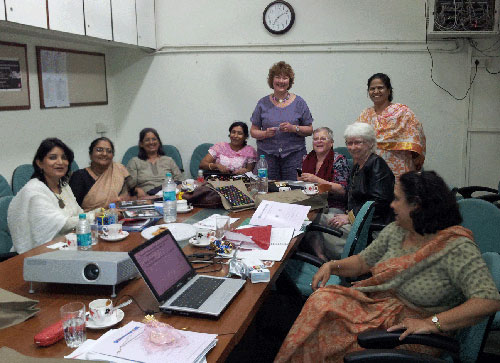 The SIGN network aims at facilitating collaboration in research and an exchange of knowledge between universities, organisations and corporations in India. The focus areas are gender, management and improvement of health in working life. Annika Härenstam, Birgitta Jordansson and Hanna Westberg went to India in early 2012, for a first meeting with the network’s steering committee (Photo from the first meeting of the steering committee).
Two workshops were held with approximately 20 researchers in Mumbai and New Delhi, and a reception was organised at the Swedish Embassy, that was attended by representatives of the Swedish Agency for Growth Policy Analysis (Tillväxtanalys), Swedish Chamber of Commerce, and NGOs working in India. These contacts are considered to be important in order to enhance future collaboration between academics, business and civil society in India and Sweden.

The next step will be to link up researchers with common fields of interest in the two countries, especially at University of Gothenburg. SIGN intends to organise conferences and seminars, initiate research projects, and exchange experiences and methods with Indian colleagues e g regarding equality of opportunities for men and women in working life. During their June 2011 stay in Gothenburg, Sunita Kaistha and Amita Sahaya gave a lecture to the students at the Department of Work Science, on ”Gender & Labour Market in India”. They also gave seminars at the Department of Sociology on the subjects of: ”Gender Diversity & Inequality in the Labour Market in India”; and ”Gender Roles & Livelihood – a Critique”.

Dr. Denis Frank works on international migration, labour markets and political sociology. He has examined how the Swedish state and employers shaped labor migration to Sweden during the 1960s and 1970s. He has examined the labor migration from Eastern Europe to Sweden since the 1990s, and how trade unions have responded to this migration. He has, furthermore, made a comparative analysis of the Swedish immigration policy that was implemented in 2008. Personal web page.