Ulrika Möller is involved in research focusing on international relations theory and foreign policy analysis. She has studied global policy issues of interest including nuclear weapons control, and fishery management. Her research interest also includes Indian society and politics. On Friday 21 September 2007, Ulrika Möller defended her doctoral dissertation titled ”The Prospects of Security Cooperation: A Matter of Relative Gains or Recognition? India and Nuclear Weapons Control”. The faculty opponent was Professor Ian Clark from University of Wales in Aberystwyth.The thesis adresses the problem of state defection from multilateral cooperation, with empirical focus on India’s decision to repudiate the Comprehensive Test Ban Treaty (CTBT) in 1996. Theoretically, the thesis develops an explanation to state defection which contradicts the commonly held view, launched by structural realism, of international politics as a self help system. More information about the dissertation (only in Swedish) .
She is now working on a new project related to nuclear weapons control in Iran, titled ”Nuclear Weapons, International Norms and States’ Motives: A Study of Iran’s Nuclear Ambitions”. It is funded by a grant given by the Swedish Institute of International Affairs (UI) in late 2007.

Ulrika Möller is also involved in a new research project in the department, focusing on political leadership and democratization in Asia and Africa, with case studies dealing with the situation in India and Pakistan. The project, coordinated by Dr. Isabell Schierenbeck, is titled ”The Road to Democracy: Exploring the Impact of Leadership Guidance”. In October 2007, this project was granted SEK 2.4 million by the Swedish Research Council as a three-years grant (2008-10). More information about the 2007 Swedish Research Council grants. 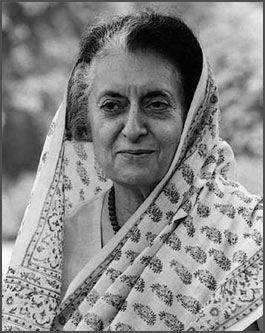 Abstract: This research-project addresses the problem of democratization through a focus on political leadership. In addition, the project is guided by the presumption that history contains important insights for how democracy can be reached, preserved and enhanced also today. In order to illustrate our point of view, India is a useful example. After almost 60 years as a sovereign state, India is currently described as a “mature democracy”. Considering the intentions among the early political leadership – most notably Mohandas Gandhi and Jawaharlal Nehru – when India gained independence (in August 1947), this is only to be expected. However, if one takes into account the Emergency Act, proclaimed by Prime Minister Indira Gandhi (photo to the right) in June 1975, the current democratic quality of the Indian society looks less self-evident. The emergency regime, carried out for over 18 months, involved authoritarian practices such as removal of parliament influence, imprisonment of opposition, press censorship and family-planning through forcible vasectomies. Nevertheless, in January 1977, Prime Minister Gandhi announced that free election should yet again be held, and gradually, the Indian society re-gained democracy. This illustration is useful in the sense that it illuminates that some states (like India) manage to defeat obstacles to democracy, which leads to the question that guides this project: What values and strategies of a political leadership facilitate the road to democracy, and reward their societies with a resilient democracy?
Literature on political leadership underlines the particular significance of political elites at periods characterized as societal crossroads. In essence, research on political leadership, or, central persons in representational roles, concerns the ability of these leaders to identify the relevant problems, prepare solutions and mobilize public opinion during periods of social and political change. Ideational and institutional research point at the potential to leadership influence in the sense that they can imprint their values and beliefs in institutions. Finally, research of democratization emphasis the importance of the image and institutions of the state as a pre-condition to a robust democracy.
Guided by these theoretical insights, it is suggested that the choices made by the leadership during the shift between nationhood and statehood are of particular significance. In short, the leadership can either re-use images and practices of nationhood to create the state, or, they can make sure that the state is set up on the basis of democracy-promoting features. Moreover, we suggest that the capacity to face future challenges to democracy is contingent on these early choices made by the political leadership.
The aim of this research-project is twofold: 1) to contribute to theoretical knowledge on the role of leadership for democratic resilience and 2) to set out guidelines useful to political leaderships in societies on the road towards democratic governance.

Dr. Möller is otherwise working on projects not specifically related to South Asia. A reseach project, “Navigating towards efficient fishery management“, adresses the problem of appropriators’ compliance with institutional regulations, and a second research project, “Beyond Neutrality?“, explores the impact of the EU-membership on the security policy in Sweden, Finland and Austria. She is also teaching in the department, topics such as international relations theory, global governance, environmental security and the EU as a global actor.

PhD Candidate Aiysha Varraich is working on a project entitled ”Power in the Hands of Saints”?