One of the largest university departments of business administration in the Nordic countries. It has a leading position at University of Gothenburg (GU) as well as nationally when it comes to educating students taking a master’s degree, regardless of subject field. The department also leads nationally as regards education of post-graduate students taking a doctor’s degree. Behind this success in educating at advanced academic levels lies a strongly organization linked research tradition going back to the 1920s.

Roger Schweizer is a researcher within the department’s Learning and Change competence group, that studies different forms of change and renewal in business and public organizations. The LOF competence group is also responsible for the graduate program leading to a Master of International Management, and for the Executive MBA program at the School of Business, Economics and Law at University of Gothenburg, as well as for some of the undergraduate courses and for several educational programs contracted by public agencies, the regional authorities or business organizations.
His research focuses on how multinational companies resolve the tension between their need to integrate their activities globally in the pursuit of economies of scale and scope with their equal need to respond to the local conditions of each host-country market. 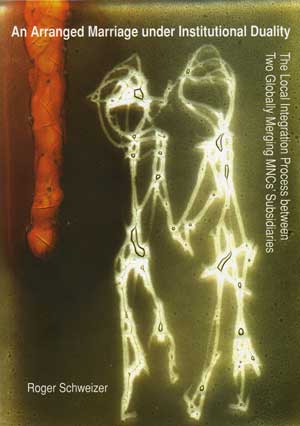 Since 2009, Professor Ramnath Narayanswamy is a Visiting Professor to the School of Business, Economics and Law, spending extended periods in Gothenburg. The previous two years, 2009 and 2010 were mostly spent there, since he decided to take his sabbatical. He then nearly completed a book on Growing Leaders (which will soon be published). Prof. Narayanswamy is otherwise a Professor in the Economics and Social Sciences Area at the Indian Institute of Management in Bangalore (IIMB). His areas of interest include Business and Society, Spirituality and Self Development, Entrepreneurship in the Creative Sector and Creativity and Innovation.
When in Gothenburg, Prof. Narayanswamy spends 50 per cent of his time at the Business and Design Lab, and the rest of his time at the School of Executive Education (organized as a central unit within the School of Business, Economics and Law). He is one of a number of visiting professors who spend time at the School of Business, Economics and Law as part of its International Visiting Professor Programme for the period 2009–13. This programme contributes to a concious strategy of improving the international profile and competitiveness of the School of Business Economics and Law by increasing the share of international researchers within the faculty. It is also part of a long-term internationalisation strategy which involves building deeper relations with a number of esteemed universities and business schools around the world. Visiting Professors serving on the programme are typically contracted for a three-year engagement, and typically work at the School for one month per academic term. By mid-2010 there were 22 visiting professors contracted to the programme and this will rise to about 30 by mid-2011. The programme has been made possible thanks to generous contributions from the business community in West Sweden. More information on the International Visiting Professor Programme.
At the Business and Design Lab, headed by Professor Ulla Johansson, he carries out research on exploring the arts-management interface, spirituality-management interface and the design-thinking-management education interface. He also contributes to a course on Strategy, Innovation and Design and am currently conceptualizing a new course on creativity as a collaboration venture with the Arts School in Gothenburg. Along with his colleague Anna Rylander, he plans for a project on exploring the reasons behind the success of Swedish firms in India, as there is little close to nothing in the literature on this subject.
Prof. Narayanswamy is also involved in collaboration with another colleague, Dr. Per Olof Larsson, the CEO of the School, on The Value of Social Cognitive Theory and Global Executive Education.
Apart from this, he directs two five day modules of the EMBA program of the University of Gothenburg every year in January in Bangalore. One module is devoted to Doing Business In India and the other is devoted to Embedding Leadership Excellence. He also contributes and participates in executive education with Volvo and other companies.

Previously, Prof. Narayanswamy has been Visiting Research Fellow in the Center for Russian and East European Studies of the University of Birmingham and a Reader in the Center of Eurasian Studies of the University of Bombay. He was also invited by the German Foreign Ministry to do a study on The Indian Response to Perestroika 1985-1990, (supported by a grant from the Volkswagen Foundation) which was subsequently published by the Federal Institute of East European Studies in Cologne.
He has also been Visiting Professor in the Maison des Sciences de l’Homme in Paris, the Federal Institute of East European and International Studies in Cologne, McGill University in Canada, The Management School, Lancaster and HEC Montreal and now at University of Gothenburg.
He has won several teaching awards from successive batches of students in both creativity and innovation. He was one among four instructors selected from all over the world by BizEd, the journal of the American Association for the Advancement of Collegiate Schools in Business, who have significantly contributed to innovation in management education. Current interests include creativity and innovation, spirituality and leadership. He is a Research Associate of the Chair in Ethical Management at HEC Montreal. He is part of a worldwide research initiative on Integral Leadership profiling the lives of one hundred leaders supported by the Chair. He is co-authoring a book on Mahatma Gandhi with Professor Thierry Pauchant from HEC Montreal. He authors a bi-monthly column on spiritual matters for the The Deccan Herald. He is part of the Editorial Board of the Journal of Human Values (Calcutta) and the Journal of Management, Spirituality and Religion, (Edinburgh).
In January 2012, he co-organised an international conference on ”The Spiritual Challenge in Management: What is to be Done?” at the IIMB campus in Bangalore. More information.

(Another two Indian visiting professors have been posted at the School of Business, Economics and Law:

– Associate Professor Ashok Thampy (photo). Just like Prof. Narayanswamy he comes from the at Indian Institute of Management Bangalore (IIMB). His specialisation is Finance and Control. At SBEL, he is connected to the The Graduate School, in charge of running a large number of Master of Science programmes. More information about Graduate School.