Umeå Plant Science Centre (UPSC) was established as a new research centre of experimental plant biology in 1999. It was formed jointly by the Department of Forest Genetics and Plant Physiology, Swedish University of Agricultural Sciences (SLU) and the Department of Plant Physiology at Umeå University.
The number of employees at UPSC is more than 170, including 30 to 40 postdocs and more than 35 nationalities are represented. It has got a World reputation, and in February 2005 the Scientist Magazine ranked UPSC as the World’s best work environment for life science postdocs outside the US.

Professor Gunnar Öqvist has written an article about the establishment of UPSC for Skytteanska Samfundet. It is titled ”Framväxten av Umeå Plant Science Centre (UPSC)”. Read the article (as a pdf-file).

In 2007, the UPSC Centre for Forest Technology was selected by the Swedish Research Council and VINNOVA to become one of four so-called Berzeli centres of excellence (more information about the Swedish Berzeli centres of excellence). The support amounts to SEK 100 M. for a period of 10 years.
Most of the research at UPSC is concentrated to studies of Poplar trees and the fast-growing plant Arabidopsis (backtravin Swedish) which has the comparative advantage that is is common all over the world and grows in different climatic zones.
UPSC is considered to be one of the top science centres in Europe, and collaboration projects are ongoing with Max Planck Institute in Munich, the French Institute for Agricultural Research (INRA) in Paris, University of Nottingham in UK, etc. A large group of UPSC researchers are also involved in Woodheads AB, an investment company owned by top scientists in Swedish forest biotechnology. Stockholm University and the Royal Institute of Technology (KTH) are also involved in this innovation project working in close collaboration with private Swedish enterprises.

UPSC has strong ambitions to increase its collaboration with research institutions in South Asia, especially India and Nepal, and get more post-docs from there to go to Umeå. The problem to secure funding and scholarships is however a major obstacle.

UPSC is also involved in organising a Masters programme in Plant and Forest Biotechnology attracting many international students. The education is anchored around the research topics where UPSC researchers are world leading, such as plant developmental biology, forest biotechnology, wood formation and hormone biology. More information ablout the Masters programme.

Professor Dag Lindgren, has worked at the Dept. of Forest Genetics and Plant Physiology, SLU, since 1977, has over the years had frequent interactions with scientists and breeders from many countries, also in Asia, and have periodically been working in the U.S., Australia, China, and Korea. He belongs to the editorial board of both the International scientific journals in his field; ”Silvae Genetica” and ”Forest Genetics”.
Within the Dept. of Forest Genetics and Plant Physiology Prof. Lindgren heads a research group forming the Centre for Prediction of Genetic Change. More information on the research group.
Professor Lindgren has been in charge of a major Indo-Swedish research project on ”Estimation of gene diversity and drift pattern in natural populations and plantations of four south Indian forest tree species”.
In November 2002 the project was awarded a Swedish Research Links (Asian–Swedish research partnership programme) grant for three years (2003-05) by Sida and the Swedish Research Council. See the full list of South Asia related projects that were given grants. 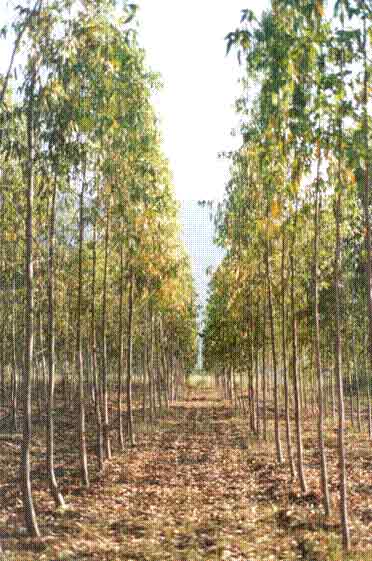 The project was carried out in collaboration with Dr Mohan Varghese, based at the Indian Institute of Forest Genetics and Tree Breeding, Coimbatore, India. Photo from a Eucalyptus plantation near Coimbatore. A small workshop was held in December 2005 at Coimbatore.
The project aimed to investigate the diversity and gene flow in four native Indian forest tree species. Identifying representative natural stands and understanding their reproductive mechanism, quantifying diversity using fertility variation and comparing the variability in plantations and seed orchards, form the work component of the Indian investigator. In November 2006, after the research project was completed, a scientific final report was presented to Sida/SAREC and the Swedish research Council.
These were the main results:

• Planted forests meet most of the wood requirement in tropical countries as natural forests are being conserved for protection of environment and water resources. Plantations of fast growing exotic species like eucalypts meet the fuel and pulpwood requirement and research has been oriented towards identifying suitable species and genotypes that adapt and perform well in a new location. Domestication of several important native species like teak and sandal is in its infancy. Fertility variation in natural stands and plantations has to be understood to develop strategies for scientific domestication of these species.
• There has been a recent trend of increasing use of native forest species in afforestation. Unlike most exotics, the native species are comparatively slow growing. Studies have been made in Teak, Sandal, Neem and Tamarind. Flowers and fruits have been inventoried for different trees and clones in a number of stands and seed orchards. Large variations in ability to produce offspring were generally found in many cases (see the table), often larger than in similar Swedish inventories. If seed collections are done from objects with few trees or clones and these are very variable, it will lead to reduced gene diversity, inbreeding and variations and unpredictability. Higher number of clones and families may have to be used in Indian seed orchards than used for conifers in the west.
• Several grafted seed orchards of teak were established in the seventies, with the hope of supplying quality seeds of this important timber species. But seed production from these orchards has been dismally low, hardly any seed is used from them. There has been a renewed interest in teak, stands are used as seed sources, and attempts have been made to understand the genetic variation between populations in the south Indian peninsula.
Read the full project report (as a pdf-file)

Professor Per Christer Odén, formerly based at the Dept. of Forest Genetics and Plant Physiology, is now the head of the Southern Swedish Forest Research Centre in Alnarp. More information.

Professor Gunnar Wingsle is working on research related to Active oxygen metabolism and MYB-transcription factors. In June 2005, he received SEK 750 000 as a two-years (2005-06) research grant from the Swedish Research Council for Environment, Agricultural Sciences and Spatial Planning (Formas) for a project titled ”Changing the lignin content in poplar”. The project was carried out in collaboration with the Bundelkhand University in Jhansi, Uttar Pradesh, India. More information about the project (only in Swedish).

Indra Prasad Sapkota from Nepal enrolled as a PhD candidate to UPSC in 2005, with support from the Swedish Institute. Indra P Sapkota has been engaged in research on forest management in Nepal, and worked on his doctoral dissertation on ”Disturbances, diversity and regeneration in Dipterocarp forests of Nepal”. Per Christer Oden has been supervising his PhD education. 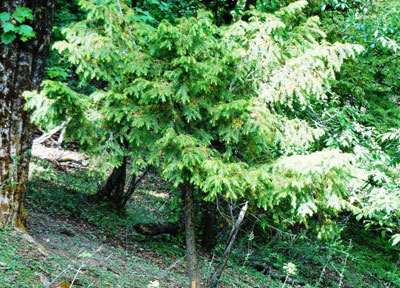 Project abstract: Nepal is rich in species diversity of forest trees; physiographic and climatic variations have created habitats for various forest tree species. However, many forest tree species are providing food and services to the rural communities. Due to over-exploitation, important and valuable species, such as Himalayan Yew is becoming rare and even under threat of extinction. All the merchantable size forest trees have been logged illegally. The plant is looped and cut for domestic uses as well as for trading. The Government of Nepal has already banned this plant for export under the Forest Act. Various parts of this species are used for food, medicine, fuel and other domestic purposes. The red and fleshy cup-shaped aril that surrounds the seed is eaten by villagers. Himalayan yew, is also known for the treatment of ovarian and breast cancer has been overexploited and smuggled heavily from eastern Nepal (Joshi, 2002; Joshi et al., 2003).

The present project aims first, to study genetic diversity and use this information to suggest conservation plan for its reliable preservation, second, to identify high secondary metabolite yielding genotypes from eastern, central and western part of Nepal using molecular markers, and third, to establish a germplasm bank of Himalayan yew in Nepal as a way to preserve the genetic diversity and to provide material for further research studies.

The Dept. of Plant Physiology has initiated a Linnaeus-Palme International Exchange Programmewith the University of Agricultural Sciences, Bangalore, India. More information about the Linnaeus Palme programme, administered by the International Programme Office for Education and Training but financed by Sida.
The project is administered by Prof. Petter Gustafsson. The contact person on the Indian side is Dr. V. R. Sashidhar from the Dept. of Crop Physiology at the Gandhi Krishi Vignana Kendra Campus (GKVK), University of Agricultural Sciences, Bangalore.
The collaboration project started in 2009. More information about the South Asia related Linnaeus Palme projects for 2010-11.