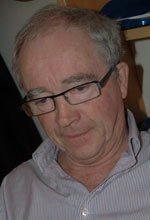 Professor Leif Gothefors from the section of Pediatrics, Dept. of Clinical Sciences, Umeå University has a long history of research projects related to the Centre for Health and Population Research (ICCDR,B) in Dhaka, Bangladesh. In 1975 Leif Gothefors defended his PhD thesis titled ”Studies of antimicrobial factors in human milk and bacterial colonization of the newborn”, dealing with the anti-infective properties of human milk. Gradually his interests then turned to vaccines and after phase 2 studies of the B-subunit cholera vaccine in Dhaka and early phase 3 studies of a monovalent rotavirus vaccine he established a small unit for vaccine trials (which later has evolved to a unit for clinical studies used also by other colleagues at the department). During the period 1980-81 he was working as a scientist at the ICCDR,B in Dhaka. Later he has been member of the WHO Task force on teaching in medical faculties in developing countries. More information on Prof. Gothefors and his research.

Since 2008, the Faculty of Medicine is involved in a Linnaeus Palme International Exchange programme collaboration project with St. John’s National Academy of Health Sciences in Bangalore, India. Initial support was provided by the International Programme Office for Education and Training (Internationella Programkontoret) in May 2008.
The project has received continued funding for 2015-16 with SEK 189 131. More information about South Asia related Linnaeus Palme programme grants for 2015-16.

The collaboration is coordinated by Professor Gothefors. On the Indian side it is administered by Assistant Professor Rashmi Rodrigues (photo to the left), an epidemiologist at the Dept. of Community Health at St. Johns.
Prof. Gothefors first visited St Johns in October 2007, and Dr. Rodrigues visited Umeå in the Fall 2008 to further plan for the project, that includes an exchange of medical students (during their 11th semester). Four students from Umeå are going to Bangalore during the Spring 2009, and a number of students have expressed their interest to participate in a Pathology course that will be run at St. Johns in the Fall 2009.

SASNET’s deputy director Lars Eklund visited the Faculty of Medicine, Umeå University and had discussions with Ms. Elmquist and Prof. Gothefors in December 2009. Read a report from the meeting