The Department has strong research teams in different areas for example Ageing, Culture and Media, Ethnicity, Gender, Labour Market and Working Life,  Information and Knowledge.
The department is very successful within the framework of social welfare research, which belongs to one out of twelve prioritized research areas at the University. 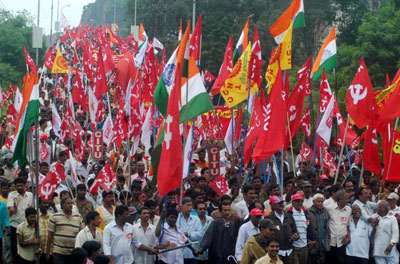 Within a research programme on civil society (funded by the Swedish Research Council), Professor Nora Räthzel (photo) leads an international research project also involving Associate Professor Annette Schnabel and Dr. Ragnar Lundström from the same department, and in collaboration with with Professor David Uzzell, Dept. of Psychology, University of Surrey, UK; Professor Diana Mulinari, Centre for Gender Studies, Lund University. The project entitled ”Moments of danger, moments of opportunity: the role of individuals as change agents in organisations. A qualitative and quantitative study of union officials in national and international unions” investigates the role of individuals as change agents in organisations. The organisations studied are trade unions and environmental organisations in Sweden, the UK, Spain, Brazil, South Africa, and India. In 2010, the project was awarded SEK 9.2 m as a grant from the Swedish Research Council. It is running for five years till 2014. Some of the research results are found in the volume ”Trade Unions in the Green Economy. Working for the Environment” (Earthscan/Routledge 2013), edited by Nora Räthzel and David Uzzel. More information.

Abstract: The overarching aim is to provide an analysis of how trade unions address the changing societal conditions in which they are operating, focusing on the roles of individuals as agents of change. The study will assess how processes commonly defined as reasons for the demise of TUs also constitute affordances: socio-political conditions which not only require unions to act in new ways, but also present them with possibilities to do so. Our overarching question is how transformative practices of unions also shape the character of civil societies in the countries under investigation.
The unions selected are a/The metal workers’ unions, arguably the best organised and largest world-wide and also those facing the greatest challenges from climate change policies, relocation of production from the North to the South, and redundancies due to technological innovation; and b/ workers in the agricultural sector. About one third of the world’s workers are employed in this sector. Agriculture is integrated into the issues of climate change and the North-South divide: On the one hand it is the sector most hardly hit by the effect of climate change, while at the same time, it produces significant effects on climate change. The IUF and other unions of food workers are forming alliances with non-union associations like “Via Campesina” to address these conflicts. As opposed to the metal sector where the majority of workers are men, about 70% of the agricultural workers are women. Thus a combined study of these two sectors will allow the researchers to better compare the influence of gender relations on new union policies.

As for the project work in India, the research team chose India because it is one of the emerging economies (like South Africa and Brazil). However, it turns out that it is quite a challenge to do research with trade unions and their environmental policies in India. The trade union system is very different from the one in other countries, especially due to its diversity. There is also a stronger tendency in the trade union movement to disregard environmental issues, it seems. The reason for this is the degree of poverty and degradation among the Indian working class, which it seems, is not very much affected by the blooming economy. Trade unionists from different unions and different parts of the country keep emphasising that workers just need jobs, no matter what kind of jobs. For the research this means that it is especially important to have included India in our research to find out how environmental issues can be included on the trade union agendas under conditions in which the organised labour force is in a relatively weak position.

The research work in India is carried out by researchers from Jadavpur University in Kolkata. They are now affiliated to the Dept. of Sociology, Umeå University.

– Dr. Payoshni Mitra (photo to the right) works as a Senior Researcher at the Department of Sociology at Umeå University, Sweden. She leads the research team in India and is currently conducting interviews with trade-unionists in various parts of India. A former badminton player and coach, Payoshni’s doctoral research was about gender issues in sports in India. She is an activist-cum-researcher in the area of intersexuality and sports.
– Nilanjan Pande is the researcher responsible for India in the project. Having completed his post graduation from the Department of History, Jadavpur University, India, he has studied in St. Andrew’s University, Osaka, Japan as an exchange student.

– Dr. Duke Ghosh (photo to the left), is presently the WOTRO-NWO Post Doctoral Fellow at the Global Change Programme, Jadavpur University. He is also a Partner and Researcher at the Global Change Research, Kolkata. He completed his Ph.D. in Economics as a SYLFF (The Ryoichi Sasakawa Young Leaders’ Fellowship Fund) Fellow from the Department of Economics, Jadavpur University. His research interests include sustainability transitions, economics of sustainable development and small business economics. Duke is a Post Graduate Diploma holder in Business Management from the Indian Institute of Management, Calcutta. With more than 15 years of professional experience, Duke is a visiting faculty at the Indian Institute of Foreign Trade, Indian Institute of Social Welfare and Business Management and has taught at the Vinod Gupta School of Management, Indian Institute of Technology, Kharagpur. He has a rich experience in providing research and consulting services to the national and international institutions and governments.

– Piya Chakraborty (photo to the right) is a sociologist who received her M.A. in Sociology at Jawaharlal Nehru University and interdisciplinary training in the Social Sciences (M.Phil.) at the Centre for Studies in Social Sciences Calcutta. She is also a guest faculty at the Department of Sociology, Jadavpur University. Her former research interest concerned ethnic minorities. She has written her M.Phil. dissertation on the Chinese diaspora in Kolkata, where she has developed her experience in ethnographic research.