The Swedish Sustainability Foundation (SSF) is an organization that supports innovative science-based start-ups that will make a difference for presently marginalized people. It mainly supports projects by young innovative scientists for projects and enterprises that use modern science for sustainable improvement of human life. It does so particularly for projects relating to purifying water, nutritious food, sustainable energy and modern medicine. The purpose of the Swedish Sustainability Foundation is to support innovative science-based projects in the area of environmental ecology and health. In addition, the foundation seeks to ensure that science is not shelved in academia but comes to practical use while also spread advances in science outside the countries it is developed in. It does so by supporting innovative start-up companies and assistance in implementing sustainable solutions and finance innovative projects.
Web page: http://www.sustainablefuture.se/

The Swedish Sustainability Foundation also publishes technical reports on the issues it supports projects on. It for example has a collection of research reports and dissertations on water purification, rural development in Bangladesh and access to safe water in Bangladesh among other topics. The full list of technical reports can be found here. In addition, the website contains so called business summaries about projects. These include workshop reports by researchers which give detailed overviews of projects and discussions on a variety of topics. These business summaries can be found here.

An important project supported by the Swedish Sustainability Foundation deals with providing a Medicine to Cure Arsenic Poisoning. SSF has given support to a young scientist, Abdul Kader, who holds a PhD in Molecular Biology from the Department of Microbiology, Tumor and Cell Biology (MTC) at Karolinska Institutet in Stockholm, for a successful work on this, now commercialized through a company, Viola Vitalis. The SSF is supporting Viola Vitalis by reaching out for assistance to outside donors. More information.
Based on research made in the USA, with the main purpose of developing a cure against Parkinson’s disease, the drug has been developed that cures arsenic poisoning by chelating the arsenic (the arsenic can bind to the drug which the body can then exude) and by improving the immune system. The medication consists of Arsenicure, an ointment for treatment of external symptoms and Arsdetox, a capsule forumlation to neutralize the accumulated arsenic sinide the body.
The government of Bangladesh has approved the drug and now Viola Vitalis is working towards financing mass production in order to meet a planned order from the authorities of Bangladesh. The Foundation has supported Viola Vitalis that has in the process grown from one to eighteen employees, and also supported setting up Mobile Clinics for Treatment of Arsenic Poisoning in Bangladesh. More information about the project.

There are mixed opinions about the magnitude of the health problem caused by arsenic poisoning, but approximately 50 million people in Bangladesh are affected by arsenic in water from wells. India, Nepal, Vietnam, China, South America and North Korea are just a few of the countries that have similar problems. On 17 November 2015 a Seminar on Arsenic in Drinking Water was held at KTH with Professor Andrew Martin who spoke about new technologies that are being developed in this regard in a project that is supported by the Swedish Sutainability Foundation and SIDA. This project, in collaboration with HVR Water Purification Sweden, will continue with four demonstration sites in Bangladesh. A summary of this project can be downloaded here. 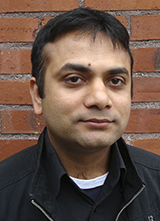 Another project that the SSF supports is entitled Small-Scale Renewable Polygeneration in Bangladesh for Electric Power Generation and Arsenic Free Water. It has been launched by Ullah Khan Ershad, PhD candidate and research engineer at the Unit of Heat and Power Technology within the Department of Energy Technology at the KTH Royal Institute of Technology in Stockholm. 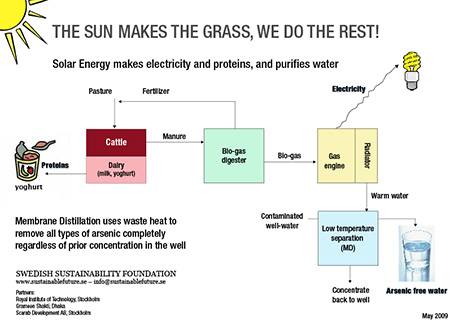 For this project, KTH collaborates with Nobel Price winner Grameen Foundation cooperate in a project that uses biogas from local dairies to run a generator. The project focuses on the application of biogas-based poly-generation for rural development in Bangladesh with the aim of providing clean energy, safe drinking water and services to rural areas. It does so by looking into the feasability of a small-scale, renewable poly-generation sustem for generating electric power and production of arsenic-free drinking water in Bangladesh. A biogas poly-generation system will be considered using agricultural waste or animal dung as feed-stock. The technical system service output includes electricity, clean water and cooking gas. The project was initially financed by SIDA and developed between 2012 and 2014. The Swedish Sustainability Foundation helps mainly through making the technology available in other countries. More information about the KTH project.

Health Drinks for Children is another project supported by the Swedish Sustainability Foundation. In the first years of life every child in the tropics suffers from several episodes of diarrhoea each year. Globally more than 5 million die and many more are disabled for life. Diarrhoeal diseases themselves are seldom mortal, it is dehydration that kills the child. The cure for dehydration is simple and colled Oral Rehydration Salts (ORS) which is a little bag, containing a blend of salts and sugars which is mixed into water. ORS is presently promoted by most international aid and relief agencies. An efficient distribution of ORS is generally considered the single most important contribution towards the reduction of starvation and infant-mortality in the world. However the difficulty in promiting ORS is the lack of uncontaminated water. If mixed in infected water the illness continues while if ORS is poured into water while boiling it can become toxic. Another difficulty is the necessity of exact mixing, over dilution makes the solution less efficient, whereas over-concentration makes it dangerous. To overcome these hurdles there is a new concept of a packaged ORS-drink which most families can afford and which can be supplied by relief organizations. SSF is helping in developing a small water plant to make it possible for local breweries to manufacture and sell ORS-drinks and pure bottled water along with other products such soft-drinks. More information about the project.