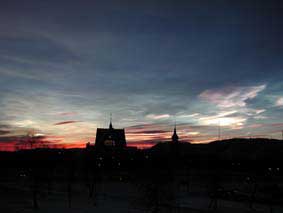 Prof. Sheila Kirkwood and Associate Professor Evgenia Belova are involved in a research collaboration with the National Atmospheric Research Laboratory (NARL) in Chitoor district (in the

Gadanki Village, near the temple town of Tirupati), Andhra Pradesh, India. The research partner on the Indian side is Dr. T. Narayana Rao at NARL.
In November 2006, the project, ”Research Collaboration between NARL, India, and the Atmospheric Physics Programme of the Swedish Institute of Space Physics (IRF), Kiruna” was given SEK 600 000 as a three-years grant from the Swedish Research Links programme (funded by Sida and the Swedish research Council). More information on the South Asia related Swedish research Links grants 2006.
Project description: The purpose of the project is to perform basic scientific research in the field of atmospheric physics, primarily using atmospheric radar. Ongoing research at the two institutes will benefit from complementary experience, scientific competence, and observational facilities at the partner institute. The scientific questions to be addressed deal with stratosphere-troposphere exchange and the microphysics of mesospheric radar echoes.
The Swedish participation is led by two senior women physicists, which is very unusual in the field of radar meteorology, a field dominated by men in all countries. However there is a growing number of women scientists in the field in India, so an important priority within the project will also be to broaden the possibilities for women scientists from both sides to establish an international contact network.