The Stress Research Institute is a national knowledge center focusing on stress reactions, sleep and health.

In the spring 2012, the Swedish Council for Working Life and Social Research (FAS) announced a special call for proposals for arranging workshops/hearings to explore future research co-operation specifically with India. The purpose was to facilitate contact and the exchange of experience between Swedish and Indian researchers; to bring knowledge from the international research community to Swedish research; and to be of considerable value to research in FAS’ areas of responsibility. Decisions were taken on 3 October 2012. Go for the decisions. 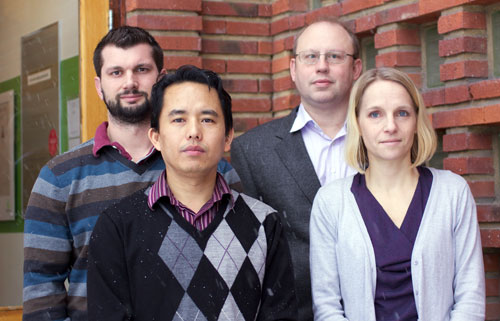 One of the successful workshop proposals came from the Stress Research Institute (main applicant Prof. Hugo Westerlund), that was given SEK 382 000 to organise a workshop with the tentative name ”Opportunities and obstacles to conducting work environment research amongst Indian workers in India and Sweden”. The aim  is to encourage future bilateral collaboration through an exchange of information, expertise and ideas between Indian and Swedish researchers about the impact of work environment and labour market conditions on health, well-being and productivity. The organisers plan to hold a 3-day conference in India and a follow-up workshop in Sweden to present theories and empirical evidence on the relationship between working conditions and job security and health in the two countries and identify areas of mutual interest.
From the Swedish side the key partners are all based at the Epidemiology Unit at the Stress Research Institute, besides Hugo Westerlund also senior researchers Dr. Linda Magnusson-Hanson, Dr. Holendro Singh Chungkham and Dr. Martin Hyde. Singh Chunghkham and Hyde are the main organisers for the workshop.
Holendro Singh Chungkham earlier worked as an Assistant Professor in the Department of Statistics, North Eastern Hill University (NEHU) in Shillong, India. There he was teaching the graduate-level students in Statistics. Primarily, he worked on Demography with emphasis on the application of survival techniques and multilevel models. At the moment Holendro has a position at Stress Research Institute as a Post-Doctoral Fellow and he is currently focusing on the application of mixed/multilevel/growth models in understanding trajectories of various behaviors in epidemiological studies.

IIPS holds a unique position among all the regional centres, in that it was the first such centre to be started, and serves a much larger population than that served by any of the other regional centres. The Institute is under the administrative control of the Ministry of Health and Family Welfare (MoHFW), Government of India.
Apart from the teaching activities, the Institute also conducts a large number of research projects on various aspects of population. The Institute also undertakes evaluative studies and large-scale surveys [namely Reproductive and Child Health (RCH), Indian National Family Health Survey]. Emphasis is given on studies related to inter-relationship of various social and economic variables of the components of population change such as Fertility, Mortality, Morbidity and Migration. The research projects of the Institute are mostly funded by the Ministry of Health and Family Welfare, Government of India and also by the State Governments, World Bank, United Nations Population Fund, World Health Organization, International Labour Organization and other Government and Non-Government organizations. The Institute in its current position has six departments-Mathematical Demography & Statistics, Fertility Studies, Public Health & Mortality Studies, Migration & Urban Studies, Population Policies & Programme, and Development Studies.

The contact person on the Indian side is Professor Laishram Ladu Singh (photo), Head, Dept. of Mathematical Demography & Statistics, IIPS. He has expertised in designing large-scale surveys (namely RCH) and was involved in one of the worldwide study about national transfer account (more information) as a representative from India.

Dr Jane Ferrie, Senior Research Fellow at the School of Social and Community Medicine, University of Bristol, UK, has been invited to be part of the project as she is an expert on Job Insecurity which was a key issue identified by the Indian collaboration partner IIPS. She is also an editor for International Journal of Epidemiology which has long established relations in India and is at the forefront of publishing epidemiological research from middle and lower income countries.