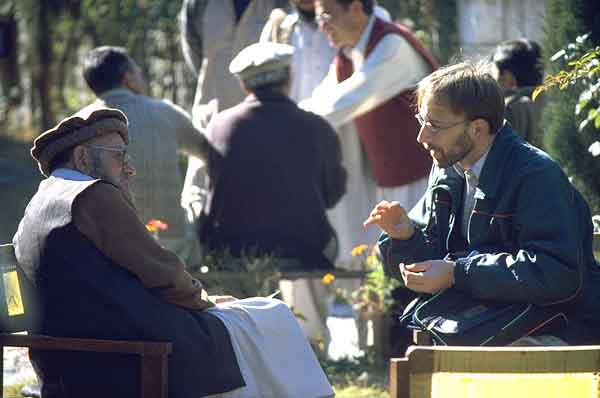 Henrik Liljegren, defended his doctoral dissertation titled ”Towards a grammatical description of Palula, an Indo-Aryan language of the Hindu Kush” on Monday 2 June 2008.
The dissertation is intended to provide a grammatical description of the Indo- Aryan language Palula, spoken by approximately 10,000 people in Chitral District in Pakistan’s North-West Frontier Province. Faculty opponent was Professor Peter E. Hook, University of Virginia, United States. More information.
(Henrik on the photo to the right along with one of his key informants in village Biori, where Palula is widely spoken) 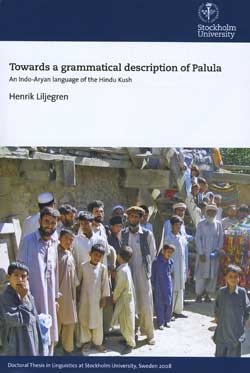 Abstract of the project: No study with the scope and detail of the current work has been presented in the past for this little-known language, and it is one of only a few in-depth studies available for languages in the immediate surrounding of the Hindu Kush region.
Palula is spoken by approximately 8,000–10,000 individuals in the two side-valleys Ashret and Biori in Chitral district, just on the border to Afghanistan. The speech variety is clearly distinct from its nearest linguistic relative in the Indus Valley, Kohistani Shina. The Indus Valley is also the probable origin of today’s Palula speakers, from where they according to local historical records migrated some 14-15 generations ago.
The analysis is based on original data primarily collected during the period 1998-2006, mainly in the form of recorded texts but supplemented by questionnaires, notes of observed language use and the elicitation of word lists and paradigms. The field work has been conducted in close cooperation with native speakers and their communities. The description covers phonology, morphology, syntax and a range of the most important topics within each of these sub-disciplines, but it is not meant to be an exhaustive reference grammar. Some topics have been given greater prominence in the work, as they have particular importance to the language, whereas others have been covered more summarily. Suggestions for further research that should be undertaken are given throughout the study. The approach chosen is theory-informed rather than theory-driven, but an underlying framework of linguistic typology and non-formalism is assumed. Diachronical development is taken into account, particularly in the area of morphology, and comparisons with other languages and references to areal phenomena are included insofar as they were motivated and available. 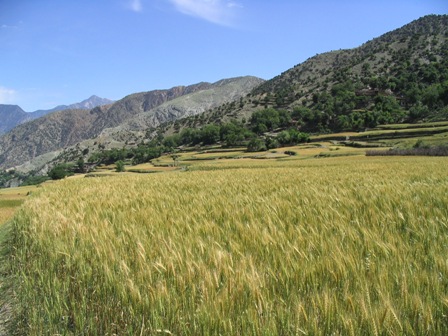 During the long period of fieldwork in Pakistan, Henrik Liljegren has been connected to the Frontier Language Institute (FLI), a non-sectarian, nonprofit training institution and resource centre based in Peshawar. Henrik took part in the establishment of the institute in 2003. It conducts research on languages spoken in different parts of the Frontier. Among 69 languages in Pakistan, 26 are spoken in NWFP and 12 are being used in district Chitral alone.
The goal for FLI is to train Pakistani individuals in the subjects of linguistics, literacy, anthropology, lexicography, translation and language planning in order to empower them to: • Preserve oral traditions, poetry, proverbs, folk tales and other aspects of their cultural heritage; • Make bilingual or trilingual dictionaries and glossaries; • Improve reading and writing skills; and • Produce literature in the national, regional and vernacular languages of Pakistan.

On Friday 30 May 2008, a symposium on ”South Asian Languages in an Areal-Typological Perspective” was held at the department. It was organised by Henrik Liljegren. Along with Naseem Haider from the Frontier Language Institute in Peshawar, he gave a presentation on ”Some approaches to building lexical databases in languages of the Hindu Kush”. Other participants at the symposium included Prof. Peter E. Hook from the University of Virginia, USA, who talked about ”EAT-expressions in Hindi, Marathi, and Kashmiri”; Dr. Joan Baart from the Summer Institute of Linguistics, who talked about ”Stress and Tone in North-West Indo-Aryan”; Dr. Ruth Schmidt, University of Oslo, who talked about ”Cross-dialect variation in the Shina vocabulary as an effect of language contact”; and Dr. Anju Saxena, Dept. of Linguistics, Uppsala University, who talked about ”Linguistic and cultural (co)variation in Kinnauri – The case of Harijan boli and Kinnauri”. 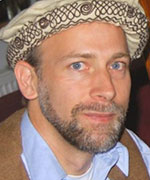 Henrik Liljegren returned to Pakistan in August 2008 to serve a two-year term as a Language Development and Research Consultant with the Frontier Language Institute. Currently FLI provides in-service training and other support to three community-based education programmes recently started up in three particular target areas, among them one mother-tongue elementary programme in Palula.
Apart from this project, Henrik Liljegren cooperates closely with Anjuman-e-taraqqi-e-Palula (the Society for the Promotion of Palula) to help produce a small body of Palula literature and work on a Palula dictionary.

In October 2014, Henrik received SEK 2.1 m as a grant from Riksbankens Jubileumsfond for project on ”Language Contact and Relatedness in the Hindukush region”. Henrik has carried out research in the northern part of Pakistan for several years, and the goal of the new project is to produce a linguistic profile of the languages spoken in the Hindukush region, an area comprising the mountainous north-eastern Afghanistan, northern Pakistan and the northern-most part of the disputed Kashmir territory.
Abstract: The region is characterized by linguistic diversity (appr. 50 languages, including Indo-Aryan, Iranian, Nuristani, Tibeto-Burman, Turkic and the language isolate Burushaski), a high level of multilingualism and its nature of being an age-old transit zone or “buffer” between different culture spheres and rival empires. Although a potential gold mine for the study of language contact and areal phenomena, political circumstances have made it largely unexplored and many questions are yet to be answered, e.g. how these languages are related to one another (particularly within a group referred to as “Dardic”) and how they have come to influence one another. A preliminary study with a smaller sample has identified a few linguistic traits as particularly interesting from an areal-typological perspective, and those will be subject to documentation and systematic investigation: the presence of retroflex fricatives/affricates, case systems/ergativity, complex deictic contrasts and the prevalence of largely vigesimal numeral systems. The conclusions drawn regarding possible similarities or differences will be of importance for language classification and for gaining a clearer understanding of the effects of long-lasting language contact.
On 30 October 2014, Henrik Liljegren was granted a  project grant from the Swedish Research Council (total amount SEK 5.28 m in five years, 2015-19) for the same project! (Language Contact and Relatedness in the Hindukush region).