Leos Müller, previously connected to the Dept. of History, Uppsala University, works as Director for the Centre for Maritime Studies (CEMAS), hosted by the department. It is a cooperative effort since 2010 of Stockholm University and National Maritime Museums, a research organization engaged in the pursuit of all aspects of maritime studies: maritime history, maritime ethnology, and partly marine archeology. More information on CEMAS web page.
Professor Müller has a major research interest in Swedish foreign trade and shipping 1600–1800, early modern entrepreneurial behaviour and merchant social networks. His doctoral thesis from 1998 was titled ”The Merchant Houses of Stockholm, c. 1640-1800. A Comparative Study of Early-Modern Entrepreneurial Behaviour”. In recent years he has written articles about the Swedish East India Company and its trade in tea, during the period 1731-1813. His focus lies on eighteenth-century trade and shipping, economic policy and shipping, early modern neutrality, and global history.

PhD Candidate Ashok Nath works mainly as an independent researcher, but is linked to the Dept. of History. Till 2007, he was connected to Södertörn University College in Huddinge, first to the Dept. of Human Geography, and then the Tourism Studies Programme for several years, where he was working as a part-time external teacher. He usually lectured on Ecotourism and Sustainability (Turism och lokal påverkan), since he has previously studied the Zanskar region (”the highest mountain kingdom in the Himalayas”), dealing with how tourism has effected the area and how concepts of eco-tourism and sustainability apply to this region in India.
Currently Ashok Nath lives in Dhaka, Bangladesh, his wife being posted to the Swedish Embassy, and he is visiting senior research fellow at the Bangladesh Institute of Peace and Security Studies. While in Bangladesh, he is busy involved in workshops on a regional South Asia level on counter terrorism and radicalisation, as well as capacity building in Dhaka. After returning to Sweden, he might develop some course on South Asia at the department in Stockholm.

Nath’s main focus of research is South Asian Conflict History. In February 2004 he was awarded a Senior Fellowship for three years, upto 2007, at the United Services Institute of India (USI), New Delhi, India, and also a chair in Indian Military History (the Rana Partap Chair in Indian Military (Conflict) History). USI is India’s premier Institute for Military Studies, besides being Asia’s oldest Military institute of higher learning, founded in 1870. Amongst its other activities it educates officers of the United Nations Emergency Forces in Peace Keeping. Nath’s main focus of research is South Asian conflict history and military cultures, and he is considered the most eminent scholar of the Indian Army during the Company and Raj period (1600­ -1947) and an internationally renowned authority on South Asian regimental iconography. 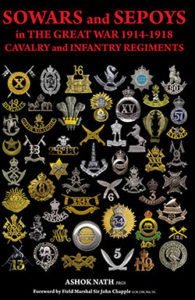 He is working on a major research project on ”Regimental Lineage, ethnic composition and regimental badges of the Indian Army 1750-2003”. The whole work will comprise a number of volumes and is being done for the USI and the Centre of Armed Forces Historical Research, located in Delhi. It is a study of the various regiments of the Armies of India from the time of the East India Company to Independence and after, also including armies of the Princely States of India prior to 1947 which were absorbed into the Indian and Pakistan Armies after 1947. The oldest of these being the Forces of Udaipur in Rajathan which date back to the 13th century. Specifically, the study concentrates on ethnic recruitment, evolution of the regimental insignia and lineage of the regiments. This study will be documented into a trilogy comprising Cavalry, Infantry, and other Arms and Services. In December 2008, the first volume was published in India. The title was ”Izzat – Historical Records and Iconography of Indian Cavalry Regiments 1750-2007”. More information about the book.
The second volume in the series is entitled Sowars and Sepoys, is published in December 2014. Currently living in Bangladesh (his wife being posted to the Swedish Embassy), a soft launch of the book will be held in the first week December 2014, to be followed by a bigger event in January 2015 at the British High Commission in Dhaka. For more information visit his personal web page.
The book carries a foreword by Field Marshal Sir John Chapple, and bridges an important gap in the historiography of individual Indian Cavalry and Infantry Regiment during the period 1914 – 1922. It records their war services, battle honours, and ethnic composition along with a detailed study of their regimental iconography.  A early chapter in the book explains the complex class structure, martial race theory ,identity and the primary elements that created an effective combat regiment and more importantly how the military authorities structured Indian regiments to exploit and to reinforce a South Asian soldier’s most deeply rooted values and his sense of self. This book therefore is a significant contribution on India and the First World War.

Nath had been earlier invited at the International Great War Conference held in March 2014 at New Delhi, to speak on Indian Cavalry and Infantry Regiments, the main combatant arms that fought in France, Flanders, Egypt, Palestine, and Mesopotamia and in East Africa during the First World War. By the end of the war over 1,100,000 Indian had served at the cost of over 64,000 lives and many more in wounded and maimed. History however, unkindly blurred out Indians from the big picture of the war, partly because Britain downplayed their contribution, and even more so because independent India completely ignored them. In fact in her zeal to throw off the vestiges of colonial rule, India disowned parts of her own history and the men who shaped it.