PhD Per Hilding defended his doctoral dissertation in 1992, ”Technology in a Controlled Economy – The Match Industry in India”, on the development of the match industry in India since independence in 1947 and up to 1985. Comparison is made between the mechanised and technically advanced part of this industry, which till recently was dominated by Swedish Match, and handicraft forms of match production, which predominate amongst domestic enterprises, especially in Tamil Nadu in southern India.

Per Hilding has been involved in a comparative historical study on child labour. The aim has been to investigate the impact of technical developments, government regulations and primary education on child labour in 19th century Western Europe and present day India. In November 2005 Dr. Hilding received SEK 2.4 Million as a three-years grant (2006-08) from Sida/SAREC to coordinate a research project titled ”Helping or hurting? Policies for combating child labour in hazardous occupations in India”. More information about the 2005 Sida grants.
Abstract: The aim of this project is to consider the effects on child labour of technological development, legislation and the expansion of elementary education in modern day India in relation to the experience of 19th century Europe. In recent years the situation and conditions of child workers in India have been documented and analysed in a number of research reports and by government commissions. Judging by these studies child labour appears in a large number of cases to be rooted in pre-industrial and indeed even pre-capitalist relations, which have survived into modern times.
The project is carried out in collaboration with Dr. Ranjula Bali Swain, Dept. of Economics, Uppsala University. More information about the project. 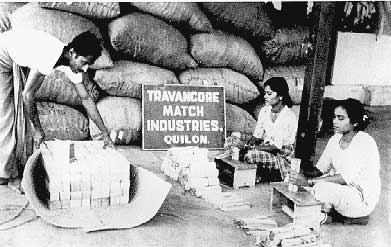 He is also engaged in a research project titled ”Workers and Entrepreneurs in the Sivakasi Match Industry”. A project on Sivakasi – a crowded and busy small town situated 50 miles south-west of Madurai, which account for the greater part of India’s production of matches, fireworks and printed matters, such as posters, show-cards, calendars etc. Growth, whether expressed in volume of production, numbers of firms, employment or sales, has been explosive during the last few decades. Testimonial evidence indicates that there is no unemployment in the region and therefore no beggars. Practically every household, it is claimed, enjoys some form of earned income from the three main industries in the area: match, fireworks and printing. The reverse of the medal, however, is to be found in the poor working conditions, the very low wages and the widespread use of child and female labour. The child labour force in Sivakasi and the surrounding area is estimated at nearly 125 000, perhaps the largest single concentration of child labour in the world. The vast majority of the child labourers in the match industry are girls. They are forced to work in order to earn their livelihood and to save for their dowry. Boys are also employed in the match industry, but most of them work in the fireworks and printing industries as helpers, carriers and so on.
In January 2003, Per Hilding presented this project at the Development studies research conference at Lund University (read an abstract).

Other similar research projects by Per Hilding:
• ”Child labour in the Indian Match Industry”. A project dealing with the development of the match industry in India since 1922 and up to today. Comparison is made between the mechanised and technically advanced part of this industry, which till recently was dominated by Swedish Match, and handicraft forms of match production, which predominate amongst domestic enterprises, especially in Tamil Nadu in southern India. A prime aim of the project is to seek an explanation for the conditions which favour the spread of pre-modern technology despite competition from modern mechanised production techniques. Industrial policy provides part of the answer. Issues of employment and regional policy led the Indian government to encourage labour intensive methods of production while restraining mechanised manufacturing.
The project is approaching completion and the result will soon be published in a monograph entitled ”Storm in a Matchbox: Entrepreneurship and Child Labour in the Indian Match Industry”, which is a sequel to Hilding’s doctoral dissertation ”Technology in a Controlled Economy – The match Industry in India”, Curzon press 1992.

• ”Child Labour in Present-day India in Comparative Historical Perspective”. The aim of this project is to consider the effects on child labour of technological development, legislation and the expansion of elementary education in some industries in modern day India in relation to the experience of 19th century Europe. A comparison with conditions in Western Europe during the growth of the factory system ought therefore to clarify specific characteristics in Indian development. Several hypotheses intended to account for the disappearance of child labour in the European factory system have been propounded by academic studies. Some researchers have focused on the sphere of production, arguing for a relationship between technological development and the decline of child labour. Others hold that the causes are more likely to be found in changes in the social structure and regard child labour as an integral part of working-class life and culture. Still others point to altered attitudes and values which were expressed in legislation against child labour and the introduction of compulsory schooling. It should be possible to test hypotheses regarding the reasons for the disappearance of child labour against the reality of the India of our own time. In this way factors favourable and unfavourable for the abolition of child labour may more easily be identified. (Grant from Sida).

Per Hilding is the convenor of the International Relations Seminar that was formed at Stockholm University in the Spring 2003. The purpose of the seminar is to serve as an interdisciplinary forum for discussions, cooperation and interchange of ideas between researchers and research departments in the Stockholm area. More information.

The department has established a collaboration with the Centre for the Study of Regional Development at Jawaharlal Nehru University (JNU). New Delhi, India. Sukhadeo Thorat, Professor of Economics is the main contact peerson at JNU. He supervised Maria Engman’s dissertation, see above, and he has also been the main academic supervisor for Eva-Maria Hardtman who defended her dissertation at the Dept. of Social Anthropology, Stockholm University, in the Fall 2003, on a topic concerning the Dalit situation in India (Our Fury is Burning: Local Practise and Global Connections in the Dalit Movement).
Sukhadeo Thorat is Professor in Economics at the Center for the Study of Regional Development, School of Social Sciences, Jawaharlal Nehru University in Delhi. In his research he has specialized on Agricultural development, economic institutions and development, poverty, labour studies, agrarian structure, caste and economic discrimination (particularly labour market discrimination), economic problems of schedule castes and schedule tribes, economic ideas of Dr. Ambedkar, human rights and urban slum.

Since 2007, the Dept. of Economic History is involved in a Linnaeus Palme exchange programme with the School of International Studies at Jawaharlal Nehru University in New Delhi, India. More information about the Linnaeus Palme programme, administered by the International Programme Office for Education and Training but financed by Sida.
The project has received continued funding for the period 2011-12. More information about the South Asia related Linnaeus Palme projects for 2011-12.

An outcome of the close collaboration with JNU, a formal agreement on collaboration (MoU) between Stockholm University and JNU was signed in 2008. The agreement covers a wide range of disciplines, including Political Science, Environmental Studies, Energy and Security, Social Anthropology, Physical and Human Geography and Regional Development, Gender Studies, Central and South Asian Studies, Economic History and International Relations, and International Law. Psychology, History, and Sociolinguistics may also be included. Dr. Per Hilding initiated the collaboration agreement during a visit to JNU in March 2008. This was followed by a visit to Stockholm by Prof. Harjit Singh (photo to the right), Dean for the School of Social Sciences at JNU, in the middle of September 2008. There he met with Stockholm University (SU) Vice-Chancellor Kåre Bremer and other high-profile representatives of SU to discuss the exact forms for the collaboration – that will not only focus on students and teachers exchange, but also include common activities such as joint conferences, seminars and research projects. In March 2009, Kåre Bremer visited JNU to sign the formal MoU on collaboration. More information.
This was followed up by a visit to Stockholm by Prof. B B Bhattacharya, Vice Chancellor at JNU, in October 2009, when a new agreement on a student exchange programme was signed.

Professor Amit Prakash from the Centre for the Study of Law and Governance, Jawaharlal Nehru University (JNU) in New Delhi, India, was a guest professor at the department during the spring 2013. Amit Prakash holds a PhD from the School of Oriental and African Studies, University of London. He studied for his MA and MPhil degrees in Political Science at the Jawaharlal Nehru University, New Delhi and for his graduate degree at the Maharaja Sayajirao University, Vadodara.
His areas of research include “Politics of Development”, “Dynamics of Socio-political and Ethnic Identity Mobilisation”, “Indian Politics”, “Governance and Development”, “Conflict Governance and the State”, and “Global Governance”.Previously he has been a guest professor at University of Copenhagen and Foundation de la Maison des Sciences de L’homme in Paris.
On Thursday 30 May 2013, 13–15, he held a lecture on ”Politics of development and the identity leitmotif.” The seminar was organised by the Forum for Asian Studies at Stockholm University. Venue: F702, House F, Stockholm University, Frescati, Universitetsvägen 10 F.