Centre for the Study of Cultural Evolution, Stockholm University, 2015

The Centre for the study of Cultural Evolution is an interdisciplinary initiative at Stockholm University and exists since 2007. Its objective is to create an internationally competitive scientific environment for studies on the causal relationships that shape and change human culture. This objective is achieved through involving scholars and researchers with various backgrounds, such as anthropologists, mathematicians, social scientists, to work together and mutually benefit from each other’s knowledge and methods. Initially the Centre is a collaboration between the departments of Archaeology, Linguistics, and Zoology at Stockholm University, as well as the Department of Mathemathics and Physics at Mälardalen University.

Dr. Pontus Strimling from the centre has been involved in a project that has a research part executed in India. The project is entitled ”Corruption and Social Traps: A Behavioural Approach”, and examins the question on how are people influenced by living in countries with high levels of corruption. 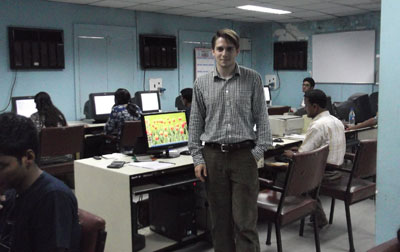 To approach the question, the project team do economy experiments in several countries with different levels of corruption. The methods have been first tested in India where Dr. Strimling’s doctoral student, Alexander Funcke, PhD candidate in Mathematics, has made experiments which are currently (January 2012) being analysed. The work has been carried out in collaboration with Professor Goutam Gupta and PhD candidate Abhishek Das at the Faculty of Economics, Jadavpur University, Kolkata. Prof. Gupta runs one of few laboratories for experimental economics – The Centre for Experiments in Social & Behavioral Sciences, which is part of a network that the Centre for the Study of Cultural Evolution tries to establish. (Photo: Alexander Funcke at the Jadavpur laboratory)
The same experiments have been also performed in the laboratory at Stockholm University. Both results will be later compared. As a next step, the same experiments will be performed in three other countries – Kyrgyzstan, Great Britain and Malta.
The project is funded by the Swedish Research Council for a five year period (2009 – 2013) and has been granted SEK 7.5 m. More information about the project.