On 1 January 2010, Stockholm University closed down its Center for Pacific Asia Studies (CPAS).
It was first established in 1976 as a Centre for Japanese Studies, but changed name and became Centrum för stillahavsasienstudier (CPAS) from 1984. In spite of its main focus on East and South-East Asia, CPAS has over the years also been involved in research related to India, Pakistan, Sri Lanka and other parts of South Asia as well, especially during a period when Dr. Ravinder Pal Singh worked as a Senior Fellow at CPAS.

Besides research, one of its chief aims has also been to reach beyond the university in order to bring scholars and students into contact with other groups with an active, professional interest in the Pacific Asian region. CPAS has regularly organised Wednesday lectures, seminars and workshops on important issues, including a high-profile 2003 workshop on India-Pakistan tensions (more information).
CPAS has been an autonomous research unit under the Dept. of Oriental Languages, located at Kräftriket, House 4 B (previously Roslagsvägen 101), but now its staff (including the last Director, Prof. Masako Ikegami) has been transferred to the Dept. of Political Science.
The budget for Asian research activities has also been transferred, which gives the former CPAS researchers a possibility to carry out strictly social scientific research on Asia together with other departments within the faculty of Social Sciences, Stockholm University (facilitated by an academic board for inter-disciplinary research among the departments). Hopefully, after some time the activities that CPAS used to conduct, such as seminars, workshops and publications, will also be restored within the new framework. 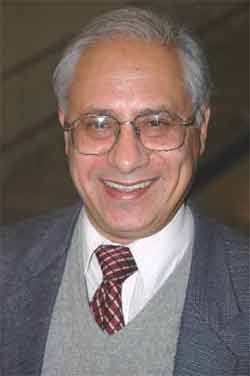 From 2003 till April 2005 Ravinder Pal Singh worked as a Senior Fellow at CPAS.
In the 1990’s he was also for seven years (1993–200) based in Stockholm as Project Leader at SIPRI (Stockholm International Peace Research Institute. After that he was a Senior Fellow at the Geneva Centre for Democratic Control of the Armed Forces in 2001, and the following year he served as UNDP Mission Leader for Security Sector Reforms in former Yugoslavia.

Ravinder Pal Singh is engaged in research on the security situation in South Asia, and relations between India and Pakistan. In 1998, while at SIPRI, he edited a volume for Oxford University Press on ”Arms Procurement Decision Making, Volume 1: China, India, Israel, Japan, South Korea and Thailand”. More information on the book.
In November 2002 he took part in the Pugwash Workshop on South Asian Security at Geneva, Switzerland, where he presented a paper on ”Some Cooperative Initiatives for India-Pakistan Dialogue and Risk Reduction”. Contacts he made at the Pugwash conference became important in arranging for a CPAS Workshop on ”New Initiatives for Risk Reduction on Unsettled Asian Borders” held in September 2003 (with a follow-up seminar a year later). More information below.

In August 2003 Ravinder Pal Singh was awarded 40 000 SEK as a SASNET planning grant for a research project on ”Security Sector Governance in Southern Asia: a case study of Indian Parliamentary Oversight of Security Sector.” See the full list of planning grants distributed in August 2003.
Abstract of project: The project aims to study application of democratic governance principles in conduct of parliamentary oversight of the security sector in India in respect of the following elements: a) aligning defence policies and expenditure with society’s broader priorities; b) professional accountability and validation of security sector decision making processes; c) monitoring, scrutinizing and reviewing consistency and coherence in defence policies with other instruments of national security; d) providing a wider perspective of civil society and security sector concerns. Developing compliance with human rights and humanitarian law; and e) Understanding gender perspective in armed forces for ensuring women’s rights and justice.

In April 2005 Ravinder Pal Singh returned to India after completing his fellowship at CPAS. He has previously been connected to the Institute for Defence Studies and Analyses in New Delhi, where he also has been working as a Senior Fellow.

In collaboration with SIPSIR (Swedish Initiative for Peace, Security and International Relations), CPAS organised a three-day workshop on India-Pakistan tensions in Skåvsjöholm/Stockholm, 26-29 September 2003, convened by Ravinder Pal Singh. The workshop, partly funded by the Swedish authorities, was titled ”New Initiatives for Risk Reduction on Unsettled Asian Borders”. The participants consisted of a small group of distinguished experts from India, Pakistan, and other regions, all with such diverse backgrounds as military and strategic experience, diplomacy, confidence building measures, human rights and democracy, and nuclear nonproliferation (Some of the participants on the photo of to the right).
They included high-profile personalities such as Lt Gen Moti Dar (former Vice-Chief of the Indian Army Staff, and involved in Indo-Pakistan Track II diplomacy), Mr Salman Haidar (former Indian Foreign Secretary, Ambassador to China, and High commissioner to UK), Gen Jehangir Karamat (former Chairman Joint Chiefs of Staff and Chief of Army Staff of Pakistan), Lt Gen Talat Masood (former Pakistani Secretary of Defence Production), and Ms Zohra Yusuf (Council Member of the independent, non-governmental Human Rights Commission of Pakistan). Besides these a number of scholars also took part in the workshop, among them Dr Ishtiaq Ahmed from the Dept. of Political Science, Stockholm University; Mr. Wajahat Habibullah, former Director of Lal Bahadur Shastri National Academy of Administration, New Delhi; and Dr Pervez Hoodbhoy, Professor of Physics at Quaid-e-AzamUniversity, Islamabad. 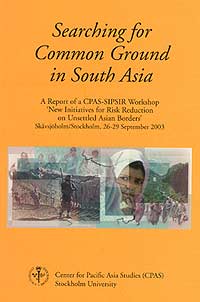 The report of the workshop was printed and published as a book in January 2004. The book was titled ”Searching for Common Ground in South Asia” and was edited by Ravinder Pal Singh (with assistance from Roberto Menkes and Mirja Juntunen from the Division of Indology, Department of Oriental Languages, Stockholm University). It was later also published in extenso on the Internet, as a pdf-file.

The unique combination of experts at the workshop created a sound and trusting work atmosphere, which resulted in very open, lively and sincere discussions. As a result of the workshop it was even possible to arrive at some common understanding on issues such as preventive diplomacy and confidence-building initiatives for risk reduction and
conflict prevention measures, security sector governance and application of International Humanitarian Law, and military/technical options for Lines of Control Surveillance for risk reduction and conflict prevention. From among the ideas offered by experts at the workshop, some commonly shared recommendations were identified for their potential to advance the Indo-Pakistan stability dialogue in a meaningful way. A Contact Group of experts from India and Pakistan agreed to take initiatives for risk reduction. As a follow-up a new brainstorming workshop was therefore arranged on Swedish ground, in Uppsala 1–4 June 2004, also convened by Ravinder Pal Singh.
Five of papers presented at this workshop No 2 were published as part of the CPAS Journal (The Stockholm Journal of East Asian Studies), vol. 14 in April 2005.
The papers now published are:
• Lt Gen Talat Masood: Building the Architecture for Peace and Stability.
• Mr Wajahat Habibullah: The Problem of Kashmir and its Resolution
• Lt Gen Moti Dar: Designing a Framework for Military Risk Reduction
• Dr Ravinder Pal Singh: Peace Education to Advance the India-Pakistan Dialogie
• Mr Shafquat Mahmood: India/Pakistan: Ways to Advance the Security Dialogue and Democratic Governance of the Security Sector.