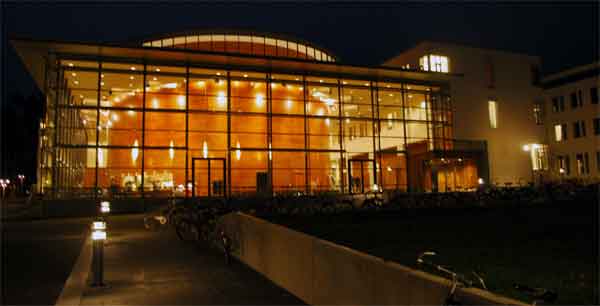 The School of Music moved from premises in central Örebro to a new-built house, including a large concert hall, on 2 October 2004.

There is a deep interest in Cross-cultural forms of artistic expression at the School of Music, and Marianne Feldt-Uhlmann –  Teacher in Singing and Vocal training (and also Concert singer) – has been in charge of a number of International exchange programmes.

A Memorandum of Understanding was signed 10 years ago between the Faculty Of Performing Arts at Maharaja Sayajirao University (MSU) in Baroda, Gujarat, India, and Örebro University. A grant from the Linnaeus-Palme International Exchange Programme was given during the academic year 2002-03, during which two professors from at MSU came to Örebro, held workshops, and taught the Swedish students in tabla; singing; and music philosophy. The two professors, who are also renowned musicians in their own right, also gave commented concerts, and met the PhD students at the department. In the future there are plans to further develop the collaboration by sending Swedish students to Baroda for study visits that might last four weeks.

The Faculty of Performing Arts at MSU has its roots in the Bharatiya Sangita Vidyalaya, founded by the Late Maharaja Sayajirao of Baroda in 1886, and through his patronage this institution, perhaps the oldest of its kind in India, has served the course of Fine Arts for the last 100 years. The late Khansaheb Fayyaz Khan who was one of the professors of Vocal Music has left his legacy of art with his pupils and the institution today specialises in the teaching of the Agra Gharana style, as well as the Kirana and the Amanali Gharana styles to advanced students.  After the Maharaja Sayajirao University of Baroda was established in 1950 the Bharatiya Sangit Vidyalaya developed into a fullfledged college and the educational programmes have been made more comprehensive.  The Faculty of Fine Arts was formally established in 1984.