School of Arts and Communication, Faculty of Culture and Society, Malmö University, 2015 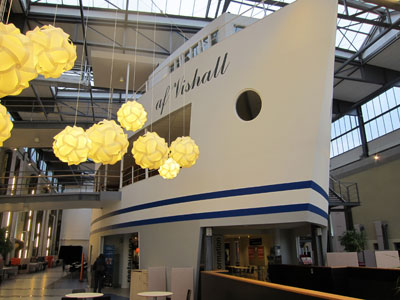 The School of Arts and Communication is one of six educational fields at Malmö University. It aims at creating new technology that should be useful for people, and developed in a fruitful meeting with art and humanistic traditions.
Within the department several courses and programmes are run, including a 120 credits Programme for Interaction Design and a Master program on ”Communication for Development”, that put some emphasis on, among others, South Asia.
This is in line with the official internationalisation strategy set up by Malmö University to focus on a selected number of countries, including India, China, Thailand, Russia and Turkey.

Oscar Hemer is a writer and journalist now working as the Coordinator of the Master programme ”Communication for Development” (ComDev), a relatively new and per definition interdisciplinary field of study and practice, combining theories of development, communication and globalization and integrating them with practical field work. The program has run regularly since it was launched in the year 2000, and is aimed at journalists, information officers and other professional groups in the media and culture sector and the objective, in order to provide an in-depth understanding of the interplay between media, communication and social change through a unique combination of theoretical studies and practical field work. More information on the Masters programme. 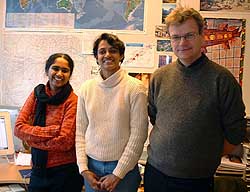 Hemer has been the Coordinator of the Malmö-Lund Third Space Seminars, first held in November 2002. A second edition of the Third Space Seminar was arranged in Malmö and Lund 26-28 November 2004. These were conferences co-hosted by the cities and universities of Malmö and Lund, gathering some of the world’s leading artists and intellectuals for a three-day programme of seminars, exhibitions, workshops and panel discussions. The overall theme for the 2004 Seminar was ”Examining the Law”, and among the key speakers were Dr. Sarat Maharaj (later to become Professor at the Malmö Art Academy, Lund University).
Oscar Hemer and Carl Henrik Svenstedt from the School of Arts and Communication were academic programme coordinators, along with Max Liljefors, Department of Art History, Lund University. Two practicing lawyers from India were also invited, Vasudha Nagaraj from the Anveshi Research Centre for Women’s Studies in Secunderabad, Andhra Pradesh; and Anuroopa Giliyal, member of the Alternative Law Forum, based in Bangalore. On Wednesday 24 November 2004 they visited SASNET (along with Oscar Hemer) and met SASNET’s deputy director Lars Eklund, see photo above.

Every year, two teachers and two students from each side have spent periods at Malmö and Bangalore respectively.
In May 2010 the department hosted Dr. Balaji Parthasarathy as a visiting professor. His research broadly focuses on the relationship between technological innovation, economic globalization, and social change.
In 2011, the project received continued funding for the period 2011-12 amounting to SEK 327 300. This was however the final year of this Malmö-Bangalore exchange programme. In December 2011, Micke Svedemar (photo to the right) from K3 spent a month at IIITB teaching.

A presentation about the collaboration between IIIT Bangalore and Malmö University has been published as a film entitled ”Design for Humans. New Communication in the Meeting between Bangalore and Malmö” on YouTube. It has been produced by the International Programme Office for Education and Training, the agency in charge of the Linnaeus Palme Exchange Programme.
In the film, Dr. Niedenthal and Prof. Dinesha are interviewed, but most of the film focuses on the real experiences of the collaboration programme by two Bangalore students, Reshma Ratnani and Roshini T Raj (seen on the photo above), that were exchange students at K3 in 2010. During their time in Sweden, they also were given a chance to do practical experience at Sony Ericsson. See the film!

After the completion of the Linnaeus Palme exchange project, the collaboration between K3, Malmö University and IIIB will continue, however in a different form, as a research collaboration. Funds have been secured for this collaboration from STINT, the Swedish Foundation for International Cooperation in Research and Higher Education, supporting the internationalisation of Swedish research and higher education. 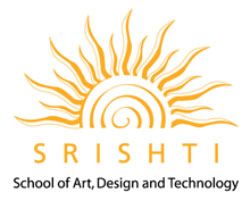 K3 has now established a new Linnaeus Palme collaboration programme with another Bangalore institution, namely  Sristi School of Art, Design and Technology (for more information on the general cooperation with Srishti, see below). This is an experimental & teaching-focused school of art and design founded in 1996 by the not-for-profit Ujwal Trust. Srishti provides its students a self-initiated, self-directed and self-assessed learning environment, with curricula integrating multiple disciplines with an arts foundation. Srishti offers undergraduate and graduate programs. It has specializations in – Textile Design, Product & Interface Design, Visual Communication Design, Independent and Broadcast Media (Film & Video) and Furniture & Interior Design.
For the year 2013/14 Malmö University was granted SEK 328 440 for this exchange programme.
This project has received continued funding for the period 2015-17 with SEK 545 955. More information about South Asia related Linnaeus Palme programme grants for 2015-16.

From 1 June 2012 and one year onwards, the School of Arts and Communication (K3) was involved in a collaboration project entitled ”Memories of Modernity” with Srishti School of Art, Design and Technology in Bangalore.

The project, similar to a previous Memories of Modernity project carried out by K3 in collaboration with South African partners 2005-07, received funding in the form of ”aktörssamverkan” from the Swedish Arts Council (Kulturrådet) in December 2011 (more information). It concentrated on two major events, the first one being a 2-day seminar in Malmö, that was held in September 2012. Its focus lay on exploring the role of performance in facilitating community participation within socio-cultural processes. Speakers included faculty from Srishti and one artist from Bangalore. Some 50 master students from K3 participated.
This was followed up by a 3-day Communication for Development seminar and workshop in Bangalore, held in January 2013. Here the focus lay on the project’s implementation in the trans-disciplinary interventions and field studies. It involved faculty and students from both universities, as well as artists engaged in the project.
Finally, a series of trans-disciplinary interventions (performative, communicative etc) were carried out in the old commercial district of Shivaji Nagar in Bangalore, conducted in collaboration by artists, academics and students. 4-5 K3 master students participated, and for them this project formed part of their final graduate work.

On the Swedish side, this project has been coordinated by Oscar Hemer; along with Kathrine Winkelhorn, heading the Masters Programme in Culture and Media Production; and Anna Brag, a visual artist with international experience, who previously worked with Oscar Hemer in the MalmöLund Third Space Seminar in 2002.
At Srishti in Bangalore, the coordinator was Deepak Sreenivasan, artist, media practitioner, researcher and pedagogue, currently a core member of Maraa, a media & arts collective based in Bangalore and faculty at Srishti. 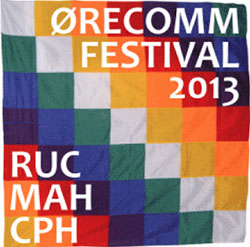 ”Memory on Trial: Media, Citizenship and Social Justice” was the overarching theme for the third Ørecomm Festival, 13–16 September 2013, a four-day event that brought an inspiring mix of seminars, lectures and conferences to Malmö, Copenhagen and Roskilde. It was jointly organised by K3 and Roskilde University. All presentations are now available on the web. 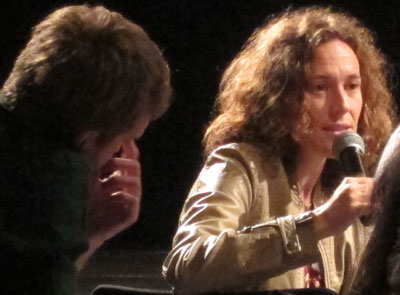 The previous 2012 Festival featured an Indian panel, as a result of the ”Memories of Modernity II” collaboration project between Malmö University and the Srishti School of Art Design and Technology, Bangalore. This experimental project of combined academic and artistic research was now documented during one of the workshops at the third Ørecomm Festival, on Sunday 15 September. Papers were presented by Nicolas Grandi and Deepak Srinavasan from Srishti, and Jyothsna Belliappa, who recently moved to Azim Premji University in Bangalore (see link page to their presentations). Itziar Ancin from K3 also presented a paper entitled ”The Kabir Project. Mumbai and Bangalore” (Itziar seen on photo to the right). See her presentation. The workshop was moderated by Oscar Hemer, who also concluded the workshop with a presentation entitled “Bengaluru Boogie: Outlines for an Ethnographic Fiction” (see the presentation). 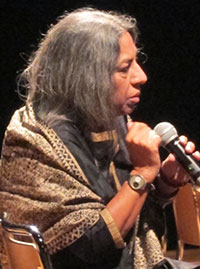 A separate workshop was dedicated to the issue of  “Methods of Analysis in Ethnographic Studies of Mediated Memories”, condducted by the Media/Ethnography Group with Annette Markham, S. Elizabeth Bird and Jo Tacchi. Finally, another South Asia related event took place at the Festival, when Urvashi Butalia (photo tothe left), Publisher, Kali for Women in New Delhi, India, held a presentation entitled “Difficult Memories: Speaking about Sexual Violence” (see her presentation).
On the first day of the workshop, held in Roskilde, there were also presentations about Bhutan. Devi Bhakta Suberi from Roskilde University talked about “ICT for Good Governance in Bhutan”; and Dorji S., Sangay Thinley & Thinley Namgyel from Sherubtse College in Bhutan, talked about “Citizen-State Relationship in Democratic Bhutan: A Post 2008 Analysis of People’s Views” (see link page to their presentations).
More information about Ørecomm 2013 with full programme.

SASNET’s former Assistant webmaster Julia Velkova completed the Masters programme in Communication for Development in 2011. During 2012, she worked part-time as a project work adjunct/assistant at K3 at the Communication for Development Masters programme, where beyond the project work, she was also involved at the New Media, ICT and Development course part of the program along with general student facilitation and maintenance of the ComDev portal. 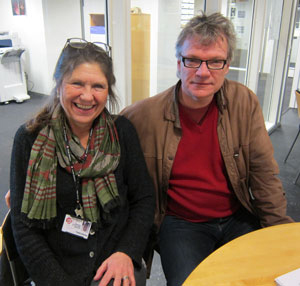 On Tuesday 10 January 2012, a SASNET team consisting of Julia and Lars Eklund visited Malmö University, and had a fruitful meeting with Oscar Hemer and Katherine Winkelhorn at K3, discussing their current and coming projects. (Photo).
Lars and Julia also met Micke Svedemar, who informed about new contacts he established in India while teaching at IIITB in December 2011. He had made good contacts at the Asian College of Journalism (ACJ) in Chennai, a premier Indian journalism school under the aegis of the Media Development Foundation. These contacts that may lead to further collaboration in the future.

Julia Velkova left SASNET on 31 August 2012, and joined a PhD programme at the  Department of Media & Communication Studies, Södertörn University College in Huddinge. More informaton about her research.