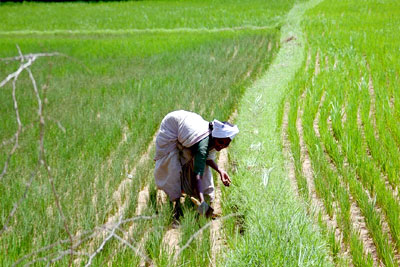 Since 1993 an optional 15 ECTS credits course, ”Möte med U-land” (Encounter a developing country), has been offered for  teachers training students at Malmö University. The course focuses on India and is open for all fifth semester students, whether they are specialising in teaching younger pupils, older pupils or in the fields of Science, Social Science or Language.
The students, normally 18 each year but only 9 last year (2011), spend three weeks in the south Indian states of Tamil Nadu and Kerala, where they do field studies according to individual choice. They are assisted by local interpreters. After the course, the students write reports.

For many years, Inge-Marie Svensson has been in charge of the course, in recent years in collaboration with Anette Zeidler at the same department.
Due to the fact that the course is only 3 weeks and therefore does not fit inte the new university curriculum, the course planned for September 2012 may be the last one. Efforts are however made to save the programme in one or another form. More information on the course.

Inge-Marie Svensson is also involved in another course entitled ”Teaching for Sustainability”, a course that usually attracts a number of Indian students. Kerstin Sonesson is responsible for this programme.
Besides, Kerstin Sonesson is also involved in the Regional Centre of Expertise on Education for Sustainable Development Skane, one of the approximately 100 centres worldwide that together constitute the United Nations University – Institute of Advanced Studies (UNU-IAS) network of research and training centres. UNU-IAS conducts research, postgraduate education and capacity development, both in-house and in cooperation with an interactive network of academic institutions and international organizations. More information.
RCE Skane is focused on making Skåne a leading example in Sweden of the power of education for sustainable development, where people of all ages are given the knowledge and tools they need to assume responsibility for creating a better tomorrow and a sustainable future. The main partners in the RCE, which include representatives from Lund City, Lund University, Malmö City, Malmö University and the region of Skane, work closely with individual citizens, businesses, public institutions, education institutions and other organizations to encourage sustainable development in the region through education. More information on RCE Skane.

Professor Margareta Ekborg defended a doctoral dissertation called ”Naturvetenskaplig utbildning för hållbar utveckling?” in 2003, and is now involved in a Sida funded research project on the interaction between knowledge and values in the opinion moulding on gene technology, in particular genetic manipulation of crops. In August 2005 she was given SEK 55 000 as a SASNET grant for an educational programme entitled ”Development of Biotechnological Education Programs and Information Packages in Nepal” This project was carried out in collaboration with Professor Olof Olsson and Dr. Gokarna Gharti Chhetri at the Department of Cell and Molecular Biology, Göteborg University. The partners in Nepal were:
• Dr. Binayak Rajbhandary, Executive Chairperson of the Himalayan College of Agricultural Sciences & Technology (HICAST).
• Tilak Shrestha, Associate Professor, Khwopa College in Bhaktapur, affiliated to Tribhuvan University.
• Bhola Man Singh Basnet, Head Communication, Publication & Documentation Division, National Agricultural Research Institute (NARI), Lalitpur.
Project abstract: During a SIDA supported project to develop more stress tolerant and nutritious rice cultivars for Nepal the researchers had identified a need to develop education and information packages to train existing Nepalese collaborators in biotechnology, to recruit and educate new workers and to inform the public in Nepal about their activities. With this planning grant the aim was to gain insight in the educational infrastructure in Nepal and establish collaboration with appropriate responsible Nepalese university teachers and their students. The researchers also wanted to build up a direct collaboration with the NARI press centre and make personal contacts with chosen representatives from the media.

Professor Emeritus Lars Henrik Ekstrand worked as a University Lecturer at the Malmö School of
Education 1966–1990 (at that time an administrative part of Lund University), and became full Professor in 1992, and acted as such until he retired in 1996 (two years before the School of Teacher Education became part of Malmö University, from 1 July 1998). He defended his PhD thesis in International Education at the University of Stockholm in 1978. A thesis on ”Bilingual and Bicultural Adaptation”.
Lars Henrik Ekstrand was introduced to India during the Cross-Cultural Psychology conference held in Bhubaneswar, Orissa, in January 1980 where he presented a couple of papers. After the conference, he and his then wife Gudrun Ekstrand were invited by the legendary Prof. Radanath Rath to stay on for some time. Having noted that children seem to be treated very differently in different cultures, a cooperative project was initiated. This lasted several years with repeated data collection in various parts of Sweden and Orissa, and also in New Delhi. 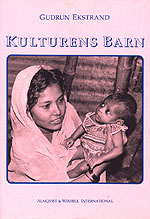 This project yielded a number of monographs and international journal articles, as well as a doctoral dissertation by Gudrun Ekstrand on differences between Sweden and Orissa on child rearing and attitudes. She defended the thesis, called ”Kulturens barn – kontrastiva analyser av kulturmönster avseende förhållandet till barn och ungdom i Sverige och Orissa, Indien”, in 1990. More information on the dissertation.

From 1989 onwards Lars Henrik Ekstrand has devoted more and more time to development projects. It started when Dr. Eugene Ries, Director of the Community Development Service at the Lutheran World Foundation in Geneva asked him to perform an informal evaluation of the organisation’s development projects in northern Orissa, the Burdwan area in West Bengal, and in Kolkata city. This made him admire participatory activities with villagers taking part in every step of the decision process.
Later on from 1990 to 1992 he worked full-time as Coordinator for the Sida-supported Social Forestry Project in Orissa, being stationed in Bhubaneswar. The project, led by Mr. M. F. Ahmed (later becoming Inspector General for Forests in India), conducted plantations in somewhere between 5,000 and 7,000 villages all over Orissa. SIDA later on interrupted this project prematurely.

In 1989 Lars Henrik Ekstrand initiated the formation of an Educational Development Association, EDA (U-landspedagogiska Föreningen) at the Malmo School of Education. For several years, this association conducted a large number of activities, including information, research exchange and cooperation with a number of NGOs in Orissa. It also sponsored support to destitute children. Furthermore groups of teachers and students from the Malmo School of Education started to travel to India on a yearly basis. Many students went for field work in Orissa with Minor Field Studies programme grants. Indian groups of students and teachers visited Sweden in a reciprocal way.
Over the years, EDA had intimate connections with the NGO Bana Basi Seva Samiti (Forest Dwellers’ Organisation), in Phulbani district in the interior of Orissa. It is an NGO operating over a wide area in a tribal belt (more than 60 p.c. tribals), badly hit by severe malnourishment, high IMR and MMR, malaria and other epidemic diseases, alarming school drop-out, and high adult illiteracy. It was founded in 1972 by freedom fighter and Gandhian Biswanath Patnaik. The Lutheran World Service, India, provided with geological and water-drilling expertise for this cooperative water resource project between EDA and BBSS, that to a large extent was funded by Sida. The project was implemented between 1994 and 1998.

After his retirement in 1996 Lars Henrik Ekstrand has spent considerable time in Orissa with his new wife Rita Ray, Professor of Sociology at Utkal University in Bhubaneshwar. Prof. Ray is doing socio-economic research on Resettlement and Rehabilitation for various development projects, to which L H Ekstrand also contributes. In 2001 they published a joint study on ”Chaos and Complexity Theory in Development” in the International Journal of Sustainable Development and World Ecology. Presently he is finalising a major world-wide quantitative study on corruption. In September 2005 Lars Henrik Ekstrand presented a paper called ”Socio-cultural factors affecting corruption and what to do. A study of psychological and other non-economic macro-variables affecting corruption” at the 5th regional anti-corruption conference, held in Beijing, People’s Republic of China (a conference under the auspices of ADB/OECD Anti-Corruption Initiative for Asia and the Pacific). Read the full paper (as a pdf-file).
In December 2005 SASNET’s Lars Eklund visited Lars henrik Ekstrand and Rita Ray in Bhubaneshwar. Read his report.