Traffic and Roads, Department of Technology and Society, Lund University, 2015

Professor Christer Hydén is involved in an annual International Course on Transportation Planning and Road Safety at Transportation Research and Injury Prevention Programme (TRIPP) at the Institute of Technology (IIT) in Delhi.

During the period October 2007 till November 2009, Christer Hydén and Dr. Åse Svensson from the Dept. of Technology and Society were involved in a collaborative research project on Traffic Calming in India with the CUTS Centre for Consumer Action, Research & Training (CUTS CART) in the city of Jaipur, India, and the Transportation Research and Injury Prevention Programme (TRIPP) at the Institute of Technology (IIT) in Delhi. The project was financed by grants from the Swedish International Development Cooperation Agency Sida, initiated through the Swedish Embassy in Delhi.
The team from CUTS consisted of Mr Azeem ur Rehman, Project Coordinator, Mrs Varsha Rathore, and Mr Arjun Kant Jha. Mr George Cheriyan, Associate Director, CUTS International, was heading the team.
Two experts from TRIPP were also involved in the project, Professors Dinesh Mohan and Geetam Tiwari. 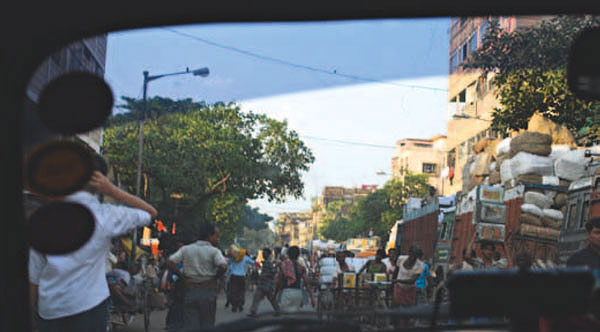 The project was based on the idea that a number of traffic calming measures should be tested in the city of Jaipur. These measures were selected from the international experience that already existed regarding efficient measures. Large field trials were carried out at altogether 24 intersections. Seven of them were selected for intense studies that should give the researchers an understanding of pedestrian problems in an Indian city, and to be able to propose measures. The studies performed were also going to be used as before studies. After implementation of the measures, similar studies were going to be made again, with the ultimate aim to draw general conclusions regarding the feasibility of these measures under Indian conditions.
Measures were proposed based on the findings that pedestrians were extremely vulnerable. The researchers proposed to rearrange the seven intersections to what was called “Standardised Traffic Calmed intersections”. (In one case it was a mid-block location). The main principles was to slow down traffic both when entering and exiting the intersections and to locate the zebra crossings so that they become attractive for pedestrians. Unfortunately the authorities did not conclude in time to allow the proposed measures to be implemented within the time frame of this project. Instead traffic calming measures already existing in Jaipur – although in a
non-systematic way – were compared with measures proven to be effective in Sweden.
For the Swedish partners it was a great experience working in India. They learnt a lot about how traffic functions in India, what the position is of experts and non-experts and, not the least, learnt a lot about culture and living in India in general. This is all thanks to the enthusiastic collaborators in Jaipur and in Delhi.

The project has been summarized in a pamphlet entited ”Traffic Calming Strategies to Improve Pedestrian Safety in India”. It was published in December 2009. Read the pamphlet.
The project has also been presented in the Lund University staff magazine LUM, in its December 2009 issue. Read the article, entitled ”Alla ska fram. LU-forskare vill förbättra för gående i indiskt trafikkaos”, written by the journalist Linda Viberg.