The Division is engaged in teaching and research in bacteriology, mycology and parasitology. Main research projects include studies on pathogenesis in experimental and natural infections, characterization of microbes and virulence factors, experimental vaccine studies, immuno-based diagnostics, microbial metabolites and public health microbiology. Focus is particularly put on the human gastric pathogen Helicobacter pylori as regards pathogenesis and new immuno- and PCR-based diagnostic methods, pathogenesis and biological effects of staphylococcal and streptococcal infections and methods to prevent infections. Another major research area is in the field of public health microbiology involving studies on air-borne microorganisms in relation to diseases and symptoms in indoor environments where new chemical-analytical methods are developed and applied. 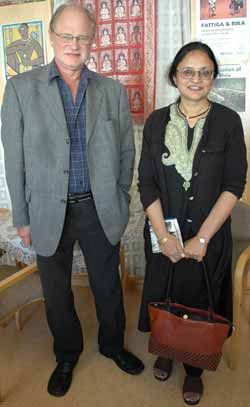 Torkel Wadström heads a research group working on ”Microbial pathogenesis and development of immuno- and PCR-based diagnostic methods”. He has been engaged in research on Bangladesh, India, Singapore and Sri Lanka.
Åsa Ljungh heads a research group on ”Pathogenesis of staphylococcal infections and methods to prevent infections”. She has mostly worked on Vietnam but also to some extent India.
Associate Professor Lennart Larsson, heads the research group on ”Microbial chemical markers”. He has also been engaged in some research focused on India.

Research and Collaboration with South Asia

Torkel Wadström is involved in a research project on ”Effects of environmental stress on the production of cell surface proteins and of regulatory and virulence genes by gastrointestinal pathogens (Helicobacter species) and by Lactic Acid Bacteria with relevance for the pathogenesis of chronic infections as well as for applications in the food industry”. The project is carried out in collaboration with Dr. Rukhsana Chowdhury, Assistant Director of the Indian Institute of Chemical Biology in Kolkata, India; and Professor Jashbhai B Prajapati, Dept. of Dairy Science, Anand Agricultural University, Gujarat, India. The project was given a SASNET Planning grant in February 2005.
Dr. Chowdhury visited Lund in September 2005 in connection with the research project. She also visited SASNET root node office, see the photo to the right of her along with Prof. Mattiasson.

Three postdocs from India joined Åsa Ljungh’s and Torkel Wadström’s research group in 2009.
– Dr. Padma Ambalam comes from the National Dairy Research Institute Deemed University in Karnal, Haryana. Padma has been to Lund University once before for a 3 month stay. Her superior at the the National Dairy Research Institute, Prof J B Prajapatialso returned to Lund University for a short visit in April-May 2009. Padma characterizes Lactic Acid Bacteria in a new European Commission-funded project that is run by the department.
– Dr. Amit Baidya comes from Indian Institute of Chemical Biology in Kolkata, the departmentthat has collaborated for many years with Prof Rukhsana Chowdury (see above). Amit studies stress responses in bacteria, with emphasis on Lactic Acid Bacteria, also in the European Commission-funded project.
– Dr. Kanthi Kiran, from the Indian Institute of Technology Madras (IITM) in Chennai. With a strong background biochemistry, biotechnology and bioanalytical techniques he will be of great value in two projects and transfer knowledge to the rest of the group. He is part of the European Commission-funded project and among other items study adhesion to various surfaces. 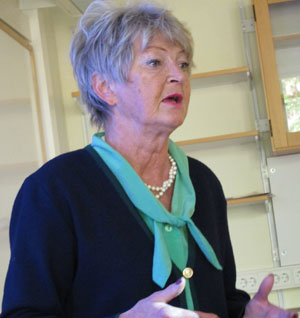 Abstract: As long as we know, LAB have been used to ferment food, and as a means for preservation of food. Nowadays, our intestinal content of LAB has decreased, and this is part of the reason that the prevalences of several gastrointestinal disturbances have increased. With modern technology, several important and beneficial criteria of LAB have been demonstrated such as antagonistic effect against enteric pathogens, binding of potentially carcinogenic substances (evoking cancer), effects on the immune system, and production of antioxidants which bind reactive oxygen species, ROS, which are produced in our intestine and are very toxic. Part of this knowledge has lead to that multiple preparations are sold as “beneficial for your health, prevents against travellers´ diarrhea”  etc. but the doses of LAB are low, the shelf life is not documented, and there are few scientific reports documenting  their effects. Clearly, more scientific studies are needed to document their beneficial effects!
See the seminar series poster

European Study Group on Pathogenesis and Immunology in Helicobacter Infections

Prof. Wadström is one of the two Chairmen of the Executive Committee of the European Study Group on Pathogenesis and Immunology in Helicobacter Infections, ESGPIHI (affiliated to the European Helicobacter Study Group, EHSG). It was founded in 1992 as the European Pathogenesis and Immunology Study Group by scientists working on Helicobacter infections with the main purpose of stimulating collaboration between groups. One approach to realize this goal is to arrange basic science meetings on pathogenesis, immunology, and genetics. Pathophysiology, diagnosis, antimicrobial agents and susceptibility testing are not the main subjects for the meetings although they may be borderlines to the fields. ESGPIHI regularly organises International workshops. Over the years, they have developed into international meetings with interaction between invited specialists presenting keynote lectures and young scientists presenting original work. The 2006 workshop took place in Helsingør in Denmark.