PhD Candidate Mariam Meynert has worked for several years on a doctoral dissertation project focusing on childhood and postmodernity. In 2007, she completed a Masters in Social Science at the Dept. of Education, Lund University, and on Monday 10th June 2013, at 14.00, she defended her Licentiate degree (Fil. Lic.) thesis entitled ”Conceptualizing Childhood, Pedagogy and Research into the Postmodern”. The opponent was Associate Professor Barbara Schulte. Venue: Dept.of Sociology, class room 3, Paradisgatan 5, Lund.
Originally coming from India, Meynert has been connected to Lund University since 1987, and also working for some periods at University of Gävle and University of Kristianstad. She has a large work experience including 17 years of teaching development studies focusing on India, 6 years of research and 6 years of community development/extension work carried out in Ethiopia and India.
Before coming to Sweden, Mariam studied for a M.Sc in Rural Community Extension, and in Home Science & Biology from Lady Irwin College, University of Delhi, and then worked as Lecturer in Education (Home Science Methods) at University of Jamia Millia Islamia in Delhi, and as Assistant Professor at G.B. Pant University of Agriculture and Technology in Uttar Pradesh till 1984. Read her full CV. 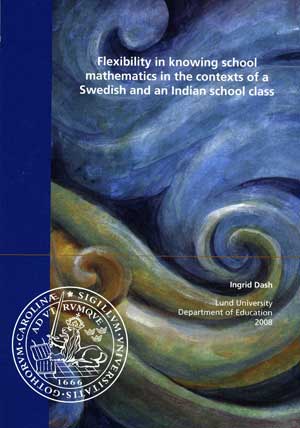 On Friday 30 January 2009, Dr.  Ingrid Dash defended her doctoral dissertation, titled ”Flexibility in knowing school mathematics in the contexts of a Swedish and an Indian school class”. The faculty opponent was Prof. Inger Wistedt, Dept. of Education, Stockholm University.
Ingrid was involved in a cross-cultural comparative study on teaching processes in Sweden and India. Her focus for the study is mathematical thinking and how students express this in different cultures. The project was supervised by Professor Lennart Svensson.
The main objective for the thesis was to obtain insights into flexible modes of knowing in school mathematics in two school class contexts, and how these relate to modes of being a learner in these contexts, with specific focus on learners’ flexible ways of discerning parts and delimiting wholes, and how they understand part- and whole-relationships while doing mathematics. Empirical material was collected from one school class in Southern Sweden and another in the Indian state of Orissa. Full information about the thesis.

On the Indian side Dr Dhruv Raina, from the Zakir Hussain Centre of Education at Jawaharlal Nehru University, New Delhi, was engaged in the project. Dr Raina completed her doctoral thesis at Göteborg University (at the Dept of History of Ideas and Theory of Science) in 1999. The thesis was called: ”Nationalism, Institutional Science and the Politics of Knowledge: Ancient Indian Astronomy and Mathematics in the Landscape of French Enlightenment Historiography”.

In January 2003 a Research Group for Multicultural Pedagogics (Forskargruppen för mångkulturell pedagogik) was established at the department. The network was open for researchers at all departments at Lund University interested in (multidisciplinary) research with a pedagogical and multicultural perspective. It started to arrange a seminar series in the Fall 2003. In 2004 the network developed into becoming the Lund University Intercultural Education Research Forum. The first coordinator was Hans Lorentz and then followed Dr. Bosse Bergstedt, both at the Dept. of Education. From November 2008, the coordination responsibility for the Forum has moved over the Malmö Academy of Music, a part of Lund University. More information.

Ananta Kumar Giri from the Madras Institute of Development Studies, Chennai, India, (photo to the left) was a visiting scholar at the department in the Fall 2003. Giri, whose main interest lies in social criticism and cultural creativity; rethinking theories and methods; and values and ethics, is now during the Fall 2004 a Visiting Associate Professor at the Research Center on Development and International Relations, Aalborg University, Denmark. More information on Giri’s research.

Earlier research projects at the department

At the Department of education Professor Lennart Svensson (photo) has led the research project ”Transnational Culture Flows and National Cultural Processes, with focus on India”. The project started in 1988 and was funded by a grant from Sida/SAREC. Its results were published as a book in 1998, called ”Meeting Rivers” (Lund Studies in Education, Volume 5, Lund University Press). The other researchers involved in the project were Dr. Birgit Rodhe, a former head-mistress, and Minister of Education in Sweden; her husband PhD Sten Rodhe (who defended his doctoral thesis on ”Deliver us From Evil. Studies on the Vedic Ideas of Salvation” at the Department of History of Religions at Lund University as early as 1946); Professor Gustave Callewaert; Inger Callewaert;Anita Diehl; Mariam John Meynert; and Ingrid Nilsson.

Lecturer Agneta W Flinck together with Dr. Rune Flinck, led a project called ”Basic teacher education by means of distance education in Sri Lanka”. The project started in 1982 and wanted to clear the backlog of untrained teachers in the compulsory school system. 1998, when Sida’s support for the project ended, 60.000 teachers had followed the program and passed national examination. The Department of education sent a notice of interest to the planned Start-IT project. The department’s proposed contribution to the project was supposed to be to train a target group, in this case staff in Organizations dealing with education in a number of developing countries, to use an IT network in a practical way.