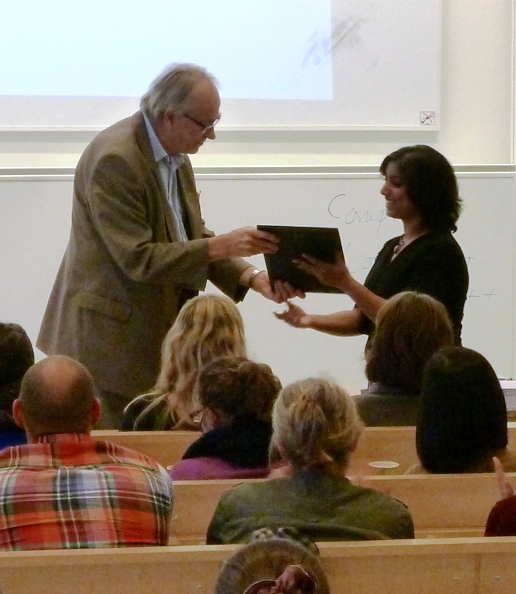 PhD Candidate Srilata Sircar came to the department as an Erasmus Mundus Action 2 scholarship holder in 2010, and completed a MSc in International Development in 2012. She was awarded The Hyden Award for Best Graduate Paper for her MSc thesis entitled “Where „Everyone‟ has Migrated: Exploring Social Transformation under the Impact of Labour Migration in Rural Bihar, India”. (Photo from the event).
Srilata has a background from St Stephen‟s College, University of Delhi, and  Tata Institute of Social Sciences in Mumbai.
Since the Fall 2012, Srilata Sircar is working on a PhD project entitled “Exploring Social Transformation in Emerging Census Towns of West Bengal, India: A Multilayered Mixed Methods Approach”.
Abstract: The past decade (2001-11) has been quite exemplary in the history of Indian urbanization. It is the first time that the absolute growth in urban population (91 million) has marginally exceeded the absolute growth in rural population (90.5 million). The actual rate of urban growth has also been higher than the projected rate, thereby putting to rest widespread pessimism over stagnation in Indian urbanization. However the most intriguing aspect of this decade of urbanization has been the windfall increase in the number of Census Towns. In the entire twentieth century, the total number of urban centres in India had increased by 2541. In comparison, the very first decade of the twenty-first century has witnessed the emergence of 2774 new urban centres of which 2532 are Census Towns. Out of these new Census Towns, more than 500 or one-fifth are located in the state of West Bengal. It is estimated that new Census Towns account for 30% of the urban growth at the national level and 66% of the urban growth within the state of West Bengal.
The proposed study seeks to explore the socio-economic organization of these new Census Towns in West Bengal as emerging sites of concentrated economic production as also of the reproduction of social relations along the lines of caste and gender. These towns represent spaces that lie in an ambivalent, if ambiguous, zone between urban and rural governance structures. They constitute the sites where agrarian transformation manifests itself in the form of a burgeoning non-farm rural entrepreneurial economy, which throws up new and evolving forms of social interaction.

At the department, Srilata also teaches a course on “Case Studies of Urbanization: The South Asian Experience” for Urban and Rural Development and Livelihoods (7.5 ECTS) on Masters level. Recently, June 2012–January 2013, she spent time in Delhi, being a Research Intern at Institute for Human Development.

Dr. P. R. Nisha, Department of History, University of Delhi, India, spends two months at the department during Setember-October 2015. She received a short-term fellowship by SASNET to stay at Lund University. More information about he fellowship programme.

She has recently submitted her doctoral thesis, ‘A History of Circus and Circus Performances in Twentieth Century Kerala‘ at the Department of History, University of Delhi. She did her M.Phil from Kannur University and masters from Calicut University in northern Kerala. Her writings have appeared in Economic Political Weekly, Social Scientist and Indian Journal of Gender Studies.
On Thursday 22 October 2015, SASNET organized a seminar in Lund on ”The Social History of Circus in India” with Dr. Nisha. Venue: Room Johannesburg (430), Geocentrum 1, Sölvegatan 10, Lund. See the poster.
In her presentation, Dr. Nisha focused on the Malabar coast region in North Kerala, an area that has been of interest to social scientists principally for the matrilineal system and performative arts and martial forms. Malabar has provided the greater part of artists, trainers, managers and entrepreneurs to Indian circuses during the 20th century. As part of her doctoral thesis, ‘A History of Circus and Circus Performances in Twentieth Century Kerala’, Nisha looked at the various traditions of physical cultures that went into the shaping of circus acrobatics, the recasting of body and its caste and gender structures, new transcultural and transnational spaces that emerged with this itinerant entertainment, technologies of the tent, and the acquisition, taming and training of animals whose past is deeply implicated in the history of hunting, wildlife management and forest policies of the colonial and post-colonial states in India. In short, circus in the sub-continent is embedded with the arrival of the modern and its effects. 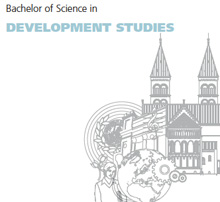 Lund University runs a 120 ECTS International Masters programme in applied Development and Management (LUMID) since 2006. LUMID Web page.
LUMID is open to students both from Sweden and the rest of the world who wish to prepare for a career in international aid and development cooperation, or wishing to further their academic studies with this profile. Through the assistance of te Swedish International Development Cooperation Agency (Sida), LUMID is able to offer students field based courses in project and programme management. The two-year programme is hosted by the Faculty of Social Sciences at Lund University, but multidisciplinarity is accomplished through teachers’ teams recruited from a number of faculties.

LUMID HAS BECOME one of the most popular and successful programmes at Lund University with around 1000 applicants for 40 places. Emphasis on applied knowledge and interdisciplinarity has resulted in a remarkable success rate, with nearly 100 percent of our students completing their degrees within two years of starting the programme. Students spend the third semester in a developing country of their choice combining academic course work with practical work.

The department runs a Bachelor of Science programme in Development Studies (BIDS) with a major in Economic History, Human Geography, Political Science or Sociology since 2009.The programme is interdisciplinary and focuses on economic, social and political processes and their linkages to development cooperation. The duration of the programme is three years. It is organised in collaboration with the Dept. of Sociology; Dept. of Political Science; and Dept. of Economic History. More information about the BIDS Programme.

Besides, the Dept. of Human Geography is since many years responsible for the Lund University undergraduate courses in Development Studies (U-landskunskap), up to C-level. A- and C-level courses run during the Fall semesters every year, and B-level courses during the Spring semesters. More information on the Development Studies programme.
Many students on these courses have over the last years done Minor Field Studies in South Asia.
Some of them, quite long time ago, were:
• Gulsen Usein on ”Världens befolkningsutveckling i ett indiskt perspektiv” in 1996
• Maria Carlsson on ”En komparativ studie av hindunationalism och indisk nationalism” in 2001; and
• Anna Kajerman on ”Risky lives: Discrimination of female children among low caste in Gulbarga district, South India”, also in 2001.
• Mattias Larsen on ”The Diffusion of Organic Farming Methods in a Rural South Indian Context”, 2003.