Dr. Anna Lindberg defended her doctoral dissertation, titled ”Experience and Identity: A Historical Account of Class, Caste, and Gender among the Cashew Workers of Kerala, 1930-2000” at the department on 13 October, 2001. Faculty opponent was Professor Umadevi Sambasivan, Dept of Economics, Kerala University. The project had been carried out under the auspices of the Center for Development Studies in Thiruvananthapuram, Kerala, India. Read abstract of the dissertation. The dissertation was later published as a monograph by NIAS Press, Copenhagen, 2003. More information on the book. It was reviewed by Manja Bomhoff in IIAS Newsletter No. 43 (Spring 2007). Read the review (as a pdf-file).
During the period 2002–2007, Anna Lindberg has worked in the USA at the University of Pennsylvania in Philadelphia, and at Penn State University, Campus Altoona, but on 1 July 2007 she returned to Lund University, being the new Director on a 50 % basis for SASNET. She has also been connected as a researcher to the Centre for East and South-East Asian Studies (ACE) where she has worked a research project titled ”Marriage traditions in South India from 1930 to the present”. More information about Anna Lindberg and her research.

• Malin Gregersen defended her doctoral dissertation entitled ”Fostering Obligations. Representations of a Mission in South India in the First Half of the 20th Century” (Fostrande förpliktelser. Representationer av ett missionsuppdrag i Sydindien under 1900-talets första hälft) on Friday 8 October 2010. The thesis focuses on narratives from Swedish missionaries working in the small town of Tirupattur, Tamil Nadu, and their influence in the formation of early 20th century Swedish world views. The faculty opponent was Prof. Kajsa Ahlstrand, World Christianity and Interreligious Studies, Faculty of Theology, Uppsala University. Full information, including link to full-text tesis. 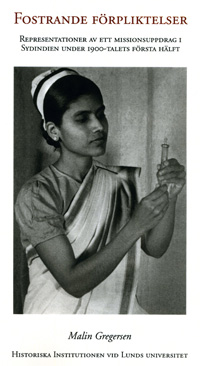 Abstract: This thesis investigates how Swedish medical missionaries in South India represented their mission not only as a mission of converting people to Christianity, but also of spreading moral and scientific values in order to found an Indian Lutheran folk church. Missionary narratives were not only informative and entertaining stories of exotic places, they also mediated perceptions of a Christian and a Swedish duty to help others and a vocation to share what they believed to be better ways of life. This was part of a self-understanding shaped and reproduced in a particular historical and geographical context. Through their texts they influenced their readers’ images of India and thus participated in shaping Swedes’ world-views. Long before the 1960s and 70s critique of colonial exploitation, there existed in Sweden a widespread international engagement, an engagement firmly rooted in the belief that they as Swedish Christians had a duty to foster others according to their own principles, and that these were superior to others.
Through the representation of ideals, counter-ideals and strategies the missionaries legitimized their presence in India and made it intelligible and meaningful. Drawing on post-colonial and post-structuralist research, the thesis analyses Swedish missionary letters, articles and books thematically, focusing on representations of bodies, homes and character. The missionaries in Tirupattur represented their task in India as a temporary but necessary fostering mission for change rather than as a race for conversion. Through their fostering projects they wanted to embetter their surroundings according to their own norms and standards. The self-understanding they conveyed calls on a duty to share ideals and knowledge through fostering, supervision, guidance and discipline.
The missionaries shared perceptions with others writing within a colonial world. They were part of an international context where discourses were constantly shared, communicated and negotiated, but they also show differing perspectives. The missionaries talked mainly of reform, stressing voluntarism rather than coercion or force. Representations of anonymous unwilling Indians as stereotype Others played important rhetorical roles as counter-images in the narratives, whilst Indians open to change directed by the missionaries are included as individuals. Willingness to learn was a condition of individuality and inclusion in the Us of the Swedish missionaries and the mission project.

Before joining the Dept. of History, Lund University, Malin Gregersen received an MA in Social Anthropology at the School of Oriental and African Studies (SOAS), University of London, and has later taken a course on Social History of India in the Department of History at University of Calcutta, Kolkata, India.

Currently, Dr. Gregersen is not involved in any South Asia related research. However, on Thursday 15 September 2011, she held a SASNET Brown Bag lunch seminar on ”Fostering Obligations: Swedish Medical Missionary Narratives from South India”. The seminar was part of an interdisciplinary South Asia Seminar series at Lund University, introduced by SASNET in January 2011 in the form of Brown bag lunch seminars. The aim is to present and disseminate the eminent South Asia related research that is carried out in so many departments at Lund University.  More information about the seminar series.

Malin Gregersen has now left Lund University and is (2014) working as a post-doc researcher at the Department of Archaeology, History, Cultural Studies and Religion, University of Oslo, Norway. More information on her personal web page.

In 1977, PhD Anita Diehl defended her doctoral dissertation dealing with caste mobilisation in South India. The dissertation was called ”E.V. Ramaswami Naicker-Periyar: a study of the influence of a personality in contemporary South India”. Anita Diehl later worked for many years as teacher of religious studies at Katedralskolan in Lund. She was born and brought up in India, being the daughter of PhD Carl Gustav Diehl, missionary and later Bishop for the Tamil Evangelical Lutheran Church (T.E.L.C.) in Tranquebar (today called Tarangambadi), Tamil Nadu, India. Bishop Diehl spent most of his life – from 1932 until 1972 – in India (except for a decade when he worked at Swedish universities, after defending his doctoral thesis in History of Religions at Lund University in 1956).