Development studies at the department:

In the fall semester 2011, the Dept. of Economic History organised a 7.5 ECTS undergraduate course on ”The Rising Giants – China and India Entering the Global Scene”. The teacher at the course was Dr. Tobias Axelsson.
This course gave a much improved first hand understanding of the rise of Asia’s two giants – China and India. First, modernisation and industrialisation in socialist China is explored from the pre-communist era until today. The process of transition from plan to market economy is unravelled. The institutional set-up and socio-economic achievements of the emerging market economy are contrasted with, but also causally linked to, those of the socialist planned economy. Secondly, the Indian economy from colonial times to present day is studied. Particular consideration is given to Independent India, contrasting and linking the miracle economy of the 1990s and the new millennium with the preceding forty years, scrutinising the economic policy of past and present in terms of economic achievements. Focusing on China and India will allow for comparisons of Asian development experiences where processes of economic growth and structural changes are analysed from the point of view of equity between individuals, groups, class and gender together with the challenges of achieving environmentally sustainable development. More information on the course.

Dr. Neelambar Hatti has been working in the department since the 1970’s and produced a vast material of research material on India, and especially on rural development and demography, as well as the social, economic and administrative conditions in the old Mysore state, nowadays part of Karnataka. Go for a list of Neelambar Hatti’s publications from 1973–2004.
He defended his doctoral dissertation in 1977 with a thesis entitled ”American Assistance and the Indian Economy 1951–1969/70”.
Hatti is also a competent lecturer, both at the courses in Economic History, where he has been teaching on ”Underdevelopment and Industralisation in the Third World”, and ”The Emergence of the Third World”; and at the South Asia track of the Masters Programme in Asian Studies, organised by the Centre for East and South-East Asian Studies (ACE).
He has now an Emeritus, but keeps on working at the department.

During the period November 2010 – January 2011, Neelambar Hatti was a guest professor at the Gokhale Institute of Politics & Economics in Pune, India. During his tenure, he did both teaching and collaborative research.
While in South Asia, he also participated in two scientific conferences:
First the conference entitled ”Reflections 2010; Managing Diversity, Recociliation and Development” held in Colombo, Sri Lanka 1–3 November 2010 (full information); and then the conference on ”South Asia 2020; Towards a Greater Unity and Interdependence”, held in Pondicherry, India 22–24 November 2010 (more information).

Neelambar Hatti started a new research project in 2011. The project is entitled ”The Nest is Empty: Aging in Modern India” and is carried out in collaboration with colleagues at Gokhale Institute of Politics and Economics in Pune, and the Institute of Social and Economic Change (ISEC) in Bangalore.

Co-ordinator: Neelambar Hatti
The projects is carried out in collaboration with Associate Professor T.V. Sekher at the International Institute of Population Sciences (IIPS) in Mumbai. Previously Sekher was affiliated to the Institute for Social and Economic Change (ISEC), in Bangalore.
PhD candidate Mattias Larsen is also part of the research group. Since January 2005 Larsen is affiliated to the Division of Peace and Development Studies (PADRIGU), Scholl of Global Studies, Gothenburg University.

Project desciption: Neelambar Hatti was given a major grant from the Swedish Research Council in November 2002, to implement this three-years project during the period 2003–2005. More information on the project (in Swedish). The project looks into the casues and consequences of discrimination of female children in modern India, by looking at five states – Haryana, Punjab, Uttaranchal, Tamilnadu and Karnataka. The first three states having the worst figues for the 0-6 age group, whereas Tamilnadu is particularly interesting because of the predominance of infanticide in four districts.
The project is interdisciplinary involving social anthropology, ethnology, economic history and population economics, involving also Pernille Gooch from the Division of Human Ecology, Dept. of Ethnology; and Alia Ahmad from the Dept. of Economics.
The main collaboration partners on the Indian side have been Minnamane Ramachandra Bhat in Karnataka; Laxmi Nodiyal in the state of Uttaranchal, and Dr. Suresh Sharma, Institute of Economic Growth in New Delhi.

At the 18th ECMSAS conference arranged by SASNET in July 2004 Neelambar Hatti and T V Sekher organised a panel on ”Education, health and demographic changes in South Asia”. Full information on the panel.
Together with Mattias Larsen they published in 2004 a Working Paper titled ”Lives at Risk. Declining Child Sex Ration in India” (No 93 in the series Lund Papers in Economic History), Full text version is available on the Internet. Go for it (as a pdf-file).

A two-day workshop on ”Lives at Risk: Vulnerable Daughters in a Modernising Society” was held in Bangalore 28–29 September 2005. The workshop was organised by the Institute for Social and Economic Change (ISEC), Bangalore, India, in collaboration with the Department of Economic History, Lund University. It focused on the imbalance in sex ratio and its implications for India, highlighted in the 2001 Census (showing a clear declining child sex-ratio among children below seven years). Venue: ISEC, Nagarbhavi, Bangalore. More information.
A paper titled ”Uncertainty Vulnerable daughters” was jointly presented by Mattias Larsen, Pernille Gooch and Neelambar Hatti, at the CEPED-CICRED-INED Seminar on ”Female Deficit in Asia: Trends and Perspectives”, held in Singapore, 5–7 December 2005. Read the draft paper. 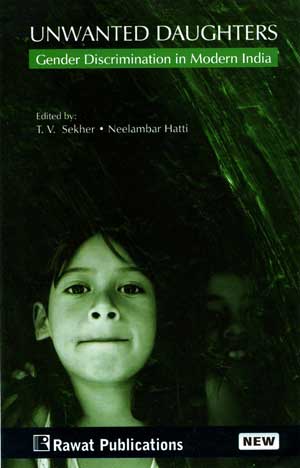 The Lund University project on imbalances in sex ratios in India have resulted in a number of publications, among them:

The book also includes papers written by eminent Indian researchers such as Tulsi Patel, Mari Bhat, and Ravinder Kaur.
Read a review of the book in the Hindu, 24 August 2010.

In an 24th October 2011 article published by the Allianz Knowledge Site, Neelambar Hatti of the Department of Economic History at Lund University, is interviewed about the child sex ratios in India, where increasingly wealthy, well-educated and ‘modernized’ Indians are choosing not to have girl children. In the article, entitled ”Gendercide: India’s Missing Girls”, Hatti characterizes the development a demographic timebomb. Read the article.
Allianz Knowledge is a corporate responsibility platform focused on climatic and demographic change, energy, microfinance, mobility, and health. It is financed by Allianz, a global financial services company headquartered in Munich, Germany.
In another article in the same issue, Indian demographer K.S. James from the Institute for Social and Economic Change (ISEC) in Bangalore speaks about another aspect of the  Demographic Profile India theme, on how there is a stark north-south divide in the Indian population that could have far-reaching consequences for the stability of the country. Read this article, entitled ”Poles Apart: India’s Demographic Divide”.

Project: Interface between Administrators and Clients in Rural Development; A Case Study of Karnataka; India

Co-ordinator: Neelambar Hatti
The projects is carried out in collaboration with R S Deshpande at the Institute for Social and Economic Change(ISEC), Bangalore, India.

Project description: Since independence, India has been engaged in a stupendous task of social creation. It aims at a radical transformation of the Indian society with the help of two simultaneous “revolutions”, industrialization and democratisation. The major role in initiating and sustaining this process of social creation is played by the centralised political authority. For, the Indian society, particularly the rural society, seems to lack those dynamic forces needed to initiate deep and self-sustaining changes. Consequently, the State has, as one main aspect of development ideology and the five-year Plans, used the public bureaucracy/administrators as an important instrument not only to create the dynamic forces but also stimulate and oversee implementation of developmental efforts.
The present project is formulated in recognition that a most important external factor facilitating or hindering development is whether the social , political and administrative environments are conducive to concerted activities. The building of local institutions can be both facilitated and hindered by public initiatives in general and individual administrators in particular. One of the primary concerns of the proposed study is to analyse how the interface between administrators and their clients, the rural populace, affect the design and implementation of development activities.

At the 18th ECMSAS conference arranged by SASNET in July 2004 Neelambar Hatti and R S Deshpande organised a panel on ”Institutions and Agricultural Development”. Full information about the panel.

Project: Agrarian Structure and Capital Accumulation in the Princely State of Mysore, 1806-1868

Project description: The study is based on a data source recently ‘rediscovered’ by us. This material comprises of 228 volumes of village account books, known as Kaditas, and cover the period l806-68. These volumes contain detailed accounts (daily, monthly and yearly) of all aspects of the agrarian economy of a well-defined area, Yelandur Taluk, which was previously a Jaghir or landed estate in Mysore State. The study has three objectives:

Co-ordinator: Neelambar Hatti
The projects is carried out in collaboration with James Heimann & Mason C. Hoadley.

Project description: A comparative study, drawing upon contemporary experiences of India and Indonesia. While Indonesia is less transparent (i.e. more ‘corrupt’) – 126th compared with 85th on a scale of 180 according to the Transparency Perception Index (TPI) – India is considerably more open in discussing the issue. This provides a window of opportunity for empirical research into not only the prevalence of corruption, a ‘culture of corruption’ (budaya korupsi in Indonesia and brashtachar in India)

Indian Guest lecturer at the department

In August 2008, SASNET awarded a guest lecture programme grant to Neelambar Hatti. He was given SEK 20 000 in order to invite Dr. T V Sekher, Associate Professor, Department of Population Policies and Programs, International Institute for Population Sciences (IIPS), Mumbai, India. Dr. Sekher was co-invited by the Nordic Centre in India (NCI) consortium to deliver lectures also at Umeå University, Stockholm University and Göteborg University. More information about the SASNET planning grants 2008.
Dr. Sekher is a sociologist and demographer that has undertaken various field-based research studies during the last fifteen years on important social and demographic issues of relevance in contemporary India. He has collaborated with researchers from UK, France, Sweden, and USA, apart from scholars from India. Besides, he is the coordinator of the training program on ”Demography, Gender and Reproductive Health” that is organised every summer for Nordic students in Mumbai by IIPS and the Nordic Centre in India.
Dr. Sekher held an open lecture on ”India’s Population Policies and Programmes (1950-2008): An Assessment” at Lund University on Tuesday 24 March 2009. In his presentation he described the significant changes that the population policies have undergone during the last 60 years. In recent years, the emphasis is on community needs and quality of services at affordable costs. The population policy of the government of India (2000) stresses the need for decentralization of health and family welfare services, involvement of men in family planning programmes, greater role for the private and voluntary sectors, and the convergence of service delivery at village levels.