The department has recently evolved an interest in developing relations with South Asian universities. During one week in November 2013, SASNET took the initiative to invite Andreas Mattsson to the state of Kerala, India. Together with SASNET’s director, Anna Lindberg, he visited the Department of Communication and Journalism at University of Kerala in Thiruvananthapuram. The aim of the visit was to overview and investigates the possibilities of future collaborations within the field of journalism.
Andreas Mattsson is a lecturer in journalism who also works as a freelance reporter. When arriving to Thiruvananthapuram, he just finished off a freelance session in Vietnam where he among other things covered the typhoon Haiyan.
This visit to Kerala was an extension of a collaboration that started in October 2013 when Mr Dilip Ramkrishna, Deputy Registrar at Centre for International Academics, and Mr M.S. Harikumar, Assistant Professor in journalism, visited Lund University and its Department of Communication and Media.

During the visit to University of Kerala, Andreas Mattsson was invited to lecture on the title “Working as a journalist in a changing media landscape” for the master students in journalism. The purpose of this talk was to give the students an overview and brief analyse in what circumstances individual journalist face in a Swedish media landscape. Meanwhile the media industry in the state of Kerala is growing rapidly; there have been many cutbacks within Swedish media companies.

The students, as well as the teachers, found this lecture very interesting. Not at least, because it gives a possible picture of the future media landscape in India if more people will consume digital media instead of traditional media, such as printed newspapers. Both the students and the lecturer himself said afterwards that it was a very memorable experience that contributed with a lot of new insights.
During a lunch meeting at the Techno park near by University of Kerala’s Karyavattom campus the delegation from Lund was given the possibility to discuss future collaborations with Dr Achuthsankar S Nair who is the head of Centre for Bioinformatics. He has also been much involved in the building of an international office within the University of Kerala. During the lunch they also met Dilip Ramkrishna, Meena T Pillai (Institute of English), and Achu Joseph (PhD student in Sociology).

To summarize, the visit provided many fruitful discussions – involving both the staff and the students. In the future SASNET, the Department of Communication and Media at Lund University and the Department of Communication and Journalism at University of Kerala wish to strengthen the relationships and seek the possibilities for future exchanges involving the teachers and researchers as well as the students in both departments.
Anna Lindberg also visited the Department of Bioinformatics, and the Department of Sociology and Cultural studies, where she among others met with Professor Achutsankar, Professsor Sobha Nair and Dr. Meena Pillai. The purpose was to discuss the existing Erasmus Mundus Action 2 mobility programme coordinated by Lund University (more information) as well as future collaboration in other ways. 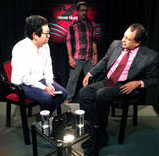 In January 2014, Andreas Mattsson again visited Kerala University and did some teaching at  the Dept. of Communication and Journalism. While discussing future exchanges with his Keralan colleagues Dr Harikumar, Dr Maggi and Dr Subash (head of the Department) he also took the opportunity to lecture about the role of being a journalist. The audience was the first year students of the Masters’ program in Journalism and Communication. He was however also invited to particiate in a TV show at Asianet, the main TV company in Kerala. The programme is a 30 minutes talk show called ”Videsha Vicharam” and is led by a former diplomat, T P Sreenivasan. More information, with links to the recordings on youtube.
Andreas has now become most fascinated by University of Kerala, and after receiving a travel grant from the southern section of his Swedish trade union – Södra Journalistföreningen, he made a new tour. This time the focus for his visit was meant to study the challenges that the department faces when Indian media enters the digital era in a big scale.

In late August 2014, Dr. Mia-Marie Hammarlin and Andreas Mattsson visited the University of Kerala in Thiruvananthapuram, India. The main purpose of their visit was to apply for a Linnaeus-Palme-scholarship for a long term mutual exchange programme with the Department of Communication and Journalism (DCJ) at University of Kerala. They had inspiring meetings and discussions with the staff at DCJ on how to develop such relations, as well as issues related to real-time journalism and media ethics. During the week-long stay in Thiruvananthapuram they also met with Dr Achutsankar S Nair, the head of the International Office at University of Kerala, and T P Sreenivasan, the Vice-Chairman and Executive Head of the Kerala State Higher Education Council. Read more.

Anna Lindberg and SASNET deputy director Lars Eklund also visited the Department of Communication and Journalism at University of Kerala in 2007, read the report from that visit. 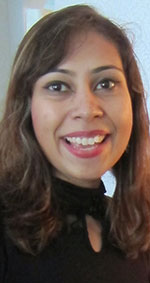 PhD candidate Sanchari De spends the academic year 2014/15 at Lund University, being an Erasmus Mundus scholarship holder through the EMINTE programme. She is writing a PhD thesis on the Shahbagh movement in Bangladesh, in particular on how the activists make use of new digital media.
She comes from the Department of Film Studies, Jadavpur University, India and is a recipient of the prestigious CSDS-ICSSR fellowship for her research. In India, Sanchari De is also affiliated to the Centre for the Study of Developing Societies (CSDS) in New Delhi, with Prof. Ravi Sundaram being her co-supervisor.
She has studied English Literature at the University of Calcutta and Film Studies at Jadavpur University. She has made presentations at various international conferences/ seminars/ symposia in India, Singapore and the USA. Her research interest is related to digital media, political mobilization and information aesthetics. Apart from that, she keenly studies films, specifically New Iranian Cinema.
During her mobility period (12 months), Sanchari will by supervised by Professor Annette Hill, take MA courses in Media and Political Engagement and Media Audiences, undertake a reading course in Media and Participation, give guest lectures on the BA in topics related to Indian media and film, digital media and political engagement, write two chapters of her thesis, present her research at the KOM seminar series, discuss her work with researchers in KOM and related departments, participate in workshops, conferences and other events within KOM and the Faculty of Social Sciences and Humanities. She will also explore teaching and research collaboration between KOM and her department of Film Studies at Jadavpur University, India.
On Monday 1 September, Sanchari visited SASNET’s office, see photo.
On 29 October 2014, she presents the project entitled ”Blog Back in Anger: An Attempt to Study Shahbag Movement (2013) in Bangladesh, the Agency of New Media and The Network of Nostalgia” at a research seminar. More information. 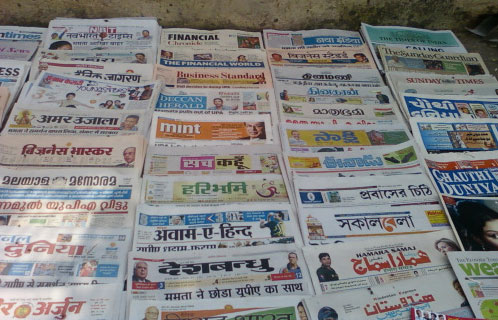 SASNET has launched a media project in collaboration with Andreas Mattsson. A few days after the third Nordic conference on South Asian Studies, organised by SASNET and Nordic Institute of Asian Studies (NIAS) in Falsterbo in June 2014 (more information), Andreas invited the Indian journalist Hindol Sengupta to his department for a discussion about the Indian media landscape.
Hindol Sengupta is the Senior Editor for the Indian edition of the Fortune magazine and is also a well-known author of several books. In the end of 2014 he will release his book Recasting India: How Entrepreneurship is changing the World’s Largest Democracy in The United States.
The fruitful discussion between Andreas and Hindol resulted in a project idea with the working title The India Media Project. The aim of the project was to build up a network of Indian and Swedish journalists, as well as media researchers, to discuss and exchange ideas about work methods, trends within the media industry and business models. The project, which will be carried out by SASNET, will involve seminars and workshops. Furthermore, Andreas and Hindol also identified a great potential in building a joint online platform where Indian and Swedish journalists and media researchers contribute with reports in areas of mutual interest.
SASNET deputy director Lars Eklund, who has 35 years experience as a journalist focusing on South Asia, is also closely involved in the planning process. During November 2014, Andreas Mattsson visited Delhi to continue the initiated discussions with Hindol Sengupta and strengthen the network with Indian journalists and media researchers.
In mid-April 2015, a decision was made to change the name of the project to South Asia Media Project, and by this move include all the eight South Asian nations in the project. However, the initiated project plan regarding the activities during 2015 will remain the same.
Read more about the project.

In March 2015, the International Programme Office for Education and Training (Internationella Programkontoret) decided to give the Journalist programme at Department of Communication and Media (KOM) SEK 222 171 as an initial Linnaeus Palme International Exchange programme grant with the Department of Communication and Journalism at University of Kerala, Trivandrum, India to develop collaboration on teachers and students exchange during the period 2015-16. This is one of the results of SASNET’s aim to strengthen the relations between South Asian journalists and media researcher with their counterparts in Sweden. The contact persons on he Indian side are Dr M S Harikumar and Dr Maggie Josephine at DCJ.
More information about South Asia related Linnaeus Palme programme grants for 2015-16.
The programme has commenced during the fall semetsre 2015. Ms. Josefin Wennangand Mr. Oscar Schau, media students from Lund University (on photo) have begun their three months study programme  at DCJ, University of Kerala, India. Both are working on specific research  areas focusing on Kerala Society and Media. An induction function and an interactive session with the Swedish students were arranged at DCJ, Karyavattom campus, University of Kerala. Head of the Department , Dr. Subash Kuttan has chaired the meeting. Contact Person of LP program in UoK, Dr. M.S Harikumar and Faculty member Ms. Maggie Josefin spoke. The Master students of Mass Communication had a vibrant interaction with the visiting Swedish students on the occasion.
Dr. Mia Marie Hammarlin, Senior Lecturer of KOM, Lund University will visit University of Kerala for a three week teaching assignment under the same project in December 2015.  Ms. Anju Jacob and Ms. Parvathy Vijayan, both Master students at the DCJ, will represent University of Kerala as the Linnaeus- Palme students for a three months study in Lund University from January 2016 onward. Dr. M.S Harikumar will  be the Linnaeus-Palme faculty  fellow from the University of Kerala during that period.
Follow the Swedish students in Kerala on Oscar Schau’s blog, go for it. 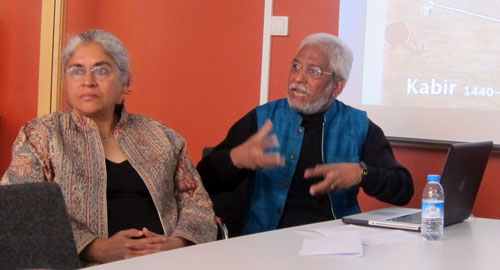 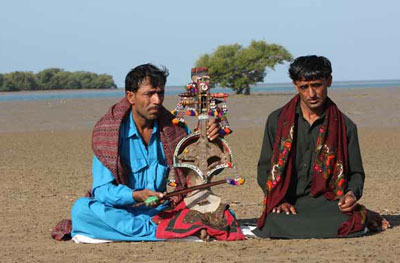 During the seminar, their documentary film ”So Heddan So Hoddan” (Like Here Like There) was screened. This fascinating film focuses on the communities in Kachchh, Gujarat, India and across the border in Sindh (now in Pakistan). Many of their poems draw on the eternal love stories of /Umar-Marui/ and /Sasui-Punhu/, among others. These songs speak of the pain of parting, of the inevitability of loss and of deep grief that takes one to unknown and mysterious terrains. More information about the film.
Jointly, Monteiro and Jayasankar have won twenty-eight national and international awards for their films. They have contributed to scholarly journals such as Cultural Studies, and both have been attached to Goldsmith’s College, London and the University of Western Sydney. They also serve as visiting faculty to several leading media and design institutions in India and abroad. They are both actively involved in ‘Vikalp‘ , which is a collective of documentary filmmakers campaigning for freedom of expression. They are also associated with various media and voluntary organisations.