Cell and Organism Biology (COB) carries on research in Genetics, Integrative Zoology, Microbiology, Plant Biology and Zoological Cell Biology. Undergraduate courses are run in a wide range of biological disciplines. From 2010 COB belongs to the new Department of Biology.

In the second week of December 2010, a delegation from DM Foundation, a private business corporation based in Kolhapur, Maharashtra, India, visited Lund University. Led by the eminent Indian nuclear scientist Dr. Anil Kakodkar (photo), they were involved in a dialogue with Lund University Commissioned Education and the Department of Biology regarding plans to establish a new university campus in India and staff it with teachers from Lund University. SASNET was involved as a consultant to Lund University. More information on the visit.
Finally, the project was however abandoned. 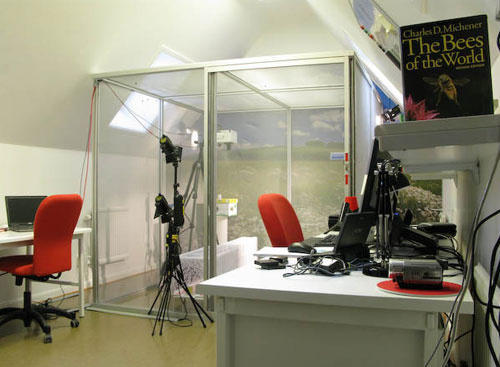 Marie Dacke (Personal web page) received her PhD at the department in 2003. After spending time as a postdoctoral fellow at the Australian National University in Canberra, she came back to the department and the research group named Lund Vision Group in 2007.

The Lund Vision Group is internationally recognised as a leading group in comparative visual science in the world. With twentyfive to thirty academics the group’s research stretches across the entire animal kingdom, from the tiny eyes of jellyfishes, via the compound eyes of insects and crustaceans, to the advanced camera eyes of squids and vertebrates. Its specialty is the design and evolution of eyes, and also how eyes are adapted to the lifestyles and habitats of animals. The techniques used range from optics, electrophysiology and theoretical modelling, to electron microscopy, molecular biology and visual behaviour.

In November 2008, Marie Dacke and her research group received SEK 600 000 as a three-years research grant from the Swedish Research Links programme (funded by Sida and the Swedish Research Council) for an India related project titled ”Multi-Sensory Control of Insect Flight”. More information on the Swedish Research Links grants 2008.
The other Lund University researchers involved in the project are the post-doc Emily Baird and PhD Candidate Torill Kornfeldt (former Science Reporter at the newspaper Dagens Nyheter).
The collaboration partner on the Indian side is Professor Sanjay P. Sane at the National Centre for Biological Sciences, Tata Institute of Fundamental research in Bangalore. 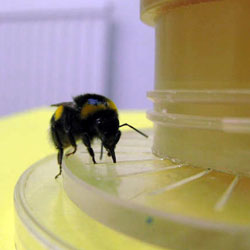 Project abstract: The aerobatic maneuvers of insects have long fascinated scientists and engineers alike. The unparalleled ability of the insects to take-off at a moment’s notice, make rapid but highly controlled turns or home in on small prey naturally requires rapid modulations of flight. For this, insect nervous systems require equally rapid sensory updates of their flight trajectory. Various sensors distributed over their body provide the nervous system with this information. One challenge that the insects faces involves integrating and processing the sensory feedback from various modalities as it arrives at the brain with varying time delays. For instance, mechanosensory information is usually transduced rapidly, whereas visual information is slower. Thus, although the input from mechanosensory modalities is available to the insect well in advance of the next wing stroke, the simultaneous visual input may not be available until a few strokes later. How does an insect process two or more sensory inputs with different latencies during flight? How do these latencies influence the time it takes for an insect to respond to each stimulus? These are only two of many questions that we seek to answer within this project. Through an international collaborative effort, we hope to extend our work on the role of individual sensory modalities in flight behavior to now include multiple sensory modalities. The Indian collaborator, Sanjay Sane, has previously studied physics and the mechanosensory control of insect flight, and the Swedish collaborator, Marie Dacke, has worked on the visual modality with special focus on behavioral and physiological aspects of low-light level responses in insects and spiders. Through close interactions between each laboratory, we aim to combine our expertise in vision and mechanosensation to jointly address how insect brains combine and process information from diverse sensory modalities to generate their spectacular flight repertoire. More information. The project is now finalized.

On Thursday 6 December 2012, Dr. Emily Baird (photo) holds a SASNET lunch seminar on ”Swedish-Australian  perspectives on research collaboration with India” on Thursday 6 December 2012, 12.30–13.30. Venue: Lunds konsthall, Mårtenstorget 3. This is the fourth and final SASNET Brown Bag seminar for the fall semester 2012, as usual held in collaboration with Arbetarnas Bildningsförbund (ABF) Lund, and Lunds konsthall.
The frequent interactions carried out within the framework of the Insect Flight project (see above), both in Lund and in Bangalore, not only gave interesting scientific results, but also gave an interesting insight into how culture affects approaches to scientific research. Given Dr. Baird’s experience of being a researcher in both Australia and Sweden, this insight has helped her to have a broad understanding of research culture in different environments and to identify both advantages and shortcomings of different approaches.

Dr. Leif Bjellin is also working in the Dept. of Cell and Organism Biology, as Director of Studies. He is not involved in any research projects related to South Asia. He has however developed a close relationship to Nepal since more than 25 years. Dr. Bjellin lives part of the year in his house in this country. When teaching courses on Pharmacology in the department he usually relates his lectures to the handling of drugs, and the patterns of consumption prevalent in Nepal.
He has established links to Nepalese academic institutions, especially in the field of life sciences, and has a number of times arranged for free-moving exchange students. Besides this he is also closely involved in trade union activities in Sweden, and this has put him into contact with GEFONT, the largest trade union in Nepal. Leif Bjellin has a special interest in GEFONT’s ambitious educational programmes in the countryside, and has studied how they progress in spite of the tense political situation prevailing in the country.

As part of his appointment at the department, Leif Bjellin carries out some research dealing with High Altitude studies. He has done field work on this issue in Nepal, and has supervised Swedish students of Medicine doing high altitude studies.