On January 1, 2010, Kalmar University and Växjö University were amalgamated and formed Linnaeus University

Linnaeus University Centre for Concurrences in Colonial and Postcolonial Studies is a new research environment at Linnaeus University (located in Växjö and Kalmar). The Centre, established in 2012, focuses on colonial and postcolonial interactions between cultures. The research team consists of eleven scientists from multiple disciplines, and projects are carried out both individually and in groups. The researchers include Professor Margareta Pettersson.

Prof. Margareta Petersson defended her doctoral dissertation titled ”Indien i svenska reseskildringar 1950–75” at Lund University in 1988, dealing with the images of India in Swedish travel descriptions between 1950 and 1975. describes the image of India that emerged in the travel accounts and places this image in an overreaching Western pattern of thinking about third-world cultures. She has been employed by the School of Humanities at Växjö University since 1995, where she is teaching in Comparative Literature. During 2000 and 2001 she was Vice Dean of the Faculty Board. Her research has focused on cross-cultural contacts and post-colonialism.
In 1996 she published the book ”Unending Metamorphoses, Myth, Satire and Religion in Salman Rushdie’s Novels”, focused on questions of interpretation determined by cross-cultural contacts. She deals with the strong reactions against Rushdie’s novels, discussing whether he insults politicians, blasphemes religion and expresses contempt for women as has been claimed. Is this true? The study discusses the relevance of the accusations and the extent to which the interpretation has been guided by the cultural background of the critics.
In a new study, cross-cultural contacts in Indo-English literature have been discussed. It comprises Indian authors writing in English – a 150-year-old tradition. Here the problems concerning the authentic or hybrid status of cultures are treated and the importance of one’s concept of culture for how literary works are interpreted. Texts by Raja Rao, Anita Desai, Salman Rushdie, M.G. Vassanji, Amitav Ghosh and Arundhati Roy are in focus. The study has resulted in a book, ”Globaliseringens ansikten: Den indo-engelska romanen”, published in 2008.

Over the years, Margareta Petersson has written many articles on Indian literature for scientific as well as popular Swedish journals. See her list of publications.
Between 1999 and 2006, she was a member of the executive committee for the project ”Literature and Literary History in Global Contexts”, financed by the National Research Council. This was a research project run by the Department of Oriental Languages at Stockholm University (but with shared responsibility by several universities in Sweden). In late 2006, the project finally materialised in a set of four volumes being published by Walter de Gruyter in Berlin & New York. Being the Editor of Volume 3:1 dealing with ”Literary Interactions in the Modern World”, she has written an article about ”Encounters between literary cultures in the 19th and 20th centuries”. More information.

PhD candidate Karin Filipsson is working on a dissertation project focusing on the Indian writer Amitav Ghosh at the Dept. of English within the School of Humanities. Earlier, Ms. Filipsson has studied Cultural Anthropology at University of California, Santa Cruz, and Indology and Hindi at the Section for Indology, Department of Oriental Languages, Stockholm University. Her research interests are Postcolonialism, Feminism (ecriture feminine, ecofeminism), Environmental critique, Identity building, and Autobiographical literature. Karin Filipsson is supervised by Professor Maria Olaussen, Department of English.

Professor Gunnel Cederlöf from the Dept. of History, Uppsala University, is affiliated to the Centre as a Visiting Professor during the period 2014-2016. Besides, she is also connected to KTH Royal Institute of Technology and its Division of History of Science, Technology and Environment; and Shiv Nadar University in India. More information about Gunnel Cederlöf and her South Asia related research, and her connection to SASNET,
Gunnel is specialised in studying environmental history, and at Linnaeus University she has focused on strengthening research on the archives of Swedish railway entrepreneur Joseph Stephens, born in Sweden in 1841 by British parents, who spent 10 years in India working on the construction of the main Bombay-Calcutta railway line. After that he returned to Sweden and bought the estate Huseby outside Växjö. Ingemar Gunnarsson (see below) is doing PhD research on this topic. Gunnel is also – with support from the Indo-Swedish research network Ecology and Society, bringing some Indian post-docs to the Centre. Radhika Krishnna (see below) is one, and Dr. Dhiraj Nite is another who will join Linnaeus University in January 2016 and stay for  a year. Dr. Nite comes from Ambedkar University in Delhi, and he will also be engaged in research on Stephens’ archives.

PhD candidate Ingemar Gunnarsson is working on a dissertation project in History focusing, as mentioned above, on the railway entrepreneur Joseph Stephens, born in Sweden in 1841 by British parents, who spent 10 years in India working on the construction of the main Bombay-Calcutta railway line. After that he returned to Sweden and bought the estate Huseby outside Växjö. . 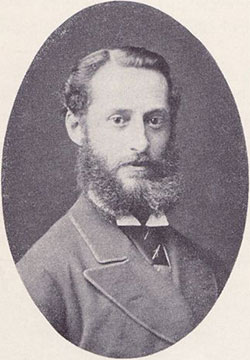 Abstract: The Indian railway investments attracted engineers and contract agents, mainly from England, but also other parts of Europe. The actors became important elements in the development of the colonial infrastructure projects. Upon his return to Sweden, Jospeph Stephens (portrait to the left) started a successful and long career as an entrepreneur, repaired the Huseby estae that was in a state of dilapidation. Gunnarsson aims to describe and analyze Stephens’s life before, during and after the India period, from both Scandinavian and British colonial perspectives, hoping to open up important historical windows and answer a number of research questions. For example, which colonial, global economic and local structures came to be centered on Stephen’s person and how did they affect his life and achievements? How did his career turn out and how did it connects to the British hegemonic aspirations in India?
On Friday 25 September 2015 at 13.00, Ingemar will give a presentation on his research at the Gothenburg Book Fair, where Linnaeus University has a monter. The presentation will be in Swedish, and is entitled ”En skandinavisk järnvägskontraktör i Indien 1860-1869 – entreprenörskap i en kolonial kontext”.

Dr. Radhika Krishnan, spends the fall semester from September until the end of December 2015 at the Centre for Concurrences in Colonial and Postcolonial Studies. She has a PhD from the Centre for Studies in Science Policy, Jawaharlal Nehru University (JNU), India, with a thesis exploring the trade unionist Shankar Guha Niyogi’s varied reflections and interventions under the broad rubrics of environment, development and technology. She is currently working on a research project on an entiely different topic, namely ”Rape Culture and Sexism in Globalizing India: How not to talk about rape in India”.
An electrical engineer by training, Radhika has worked with the Delhi-based Centre for Science and Environment (CSE) for several years. Her research has essentially looked at the interactions between technological regimes, communities and ecologies. Her research interests also include the new social movements of the 1970s and 1980s, which articulated the complex response of peasants, labourers and adivasis (India’s indigenous people) to development projects presented in them.
On Wednesday 16 September 2015, at 18.00, she holds a public lecture on ”Rape Culture and Sexism in Globalizing India”. The lecture takes its starting point in the the horrific and gruesome gang-rape of a 23 year-old woman in Delhi in December 2012, which was followed by massive protests in different parts of India. Venue Stadsbiblioteket, Västra Esplanaden 7, Växjö. More information.

The former School of Humanities was instrumental in setting up a network for postcolonial studies, Postkolonialt Forum i Sydost, that existed from 2007. The forum had members at three universities, Växjö, Kalmar and Blekinge. Approximately 20 people were regularly involved in its activities consisting of interdisciplinary research seminar series every semester connecting scholars on Literature, History, Political Science and other subjects. It resulted in a vibrant exchange of ideas. Dr. Piia Posti, Dept. of English, was the coordinator of the network. It was funded by grants from Crafoord Foundation and STINT.

The School of Humanities also joined a new Nordic research collaboration project on ”Postcolonial Literatures in English” through the so-called Nordplus Framework Programme, a funding programme administred by the Nordic Council of Ministers aimed at strenghtening educational collaboration between universities in the Nordic and the Baltic states. The collaboration involves the University of Växjö; University of Aarhus, Denmark; Joensuu University, Finland; and University of Bergen, Norway. The project will start working from 2010.
A key person in the project is Associate Professor Tabish Khair at the Department of English, University of Aarhus. Born and educated mostly in Gaya, India, he is the author of many books. Previously a journalist with the Times of India, Khair continues to write and review occasionally for papers in different countries. In particular, he writes for the Hindu (India) and the Guardian (UK).
Other Routes, an anthology of pre-modern travel texts by Africans and Asians, co-edited and introduced by Khair (with a foreword by Amitav Ghosh) was published in the UK and USA in 2005 and 2006 respectively. Khair’s latest novel, FILMING: A Love Story (2007), examines memory and guilt against the backdrop of the Partition and the 1940s Bombay film industry. A paperback edition came out late in 2008. More information on Tabish Khair’ private web page.

In March 2009, Dr. Ashis Sengupta (photo to the right) from the University of North Bengal in India was invited to Sweden on a SASNET guest lecturer grant. The School of Humanities at Växjö University was one of inviting Swedish university departments, the others being Mälardalen University in Västerås and the School of Arts and Languages, Högskolan Dalarna. Dr. Sengupta lectured for students in Växjö on Friday 20 March 2009. The title of the presentation was ”Gender and Sexuality in Contemporary Indian English Drama”.

The Linnaeus University Centre for Concurrences in Colonial and Postcolonial Studies organises seminars on a regular basis. On Thursday 3 May 2012, Professor Gunnel Cederlöf from the Department of History, Uppsala University, came and lectured on ”Climate, Polities and the Making of a Citizen: Founding an Empire on India’s Northeastern Frontiers”. Venue: Lammhult Room, F-Building, Växjö. More information.