Associate Professor Kristina Myrvold started to work at Linnaeus University in Växjö from the spring 2013. Before that, she worked at the Department of History and Anthropology of Religion (including Judaism and Indic Religions), Centre for Theology and Religious Studies, Lund University.

She defended her doctoral dissertation titled ”Inside the Guru’s Gate: The Ritual Uses of Texts among the Sikhs in Varanasi”, at Lund University on Thursday 20 December 2007. The thesis deals with Sikh rituals in Varanasi, where she has conducted fieldwork for several years. Her study focuses on religious attitudes towards the Sikh scripture and the ritual use of texts. Faculty opponent was Assistant Professor Michael Nijhawan, Dept. of Anthropology, South Asia Institute (SAI), University of Heidelberg, Germany. More information, with an abstract.

In her post-doc research, Dr. Myrvold has focused on religious practices and worship among the Sikhs in Punjab and in different diasporic settings, focusing on Sikh katha – oral and textual expositions of Guru Granth Sahib – in local and translocal contexts. She investigates contemporary manifestation of katha and which functions traditional and new forms of religious expositions have for understanding of the teaching and identity of the Sikh scripture, especially among the second generation of Swedish Sikhs. Her theoretical interests are primarily directed towards anthropology of religion, performance and ritual studies, emic historiography, and religious language and uses of texts. More information about Kristina’s research work 2004-2012.
For four years, between 2009 and 2013, she was the principal investigator and a researcher of the Nordcorp project “Sikh Identity Formation: Generational Transfer of Traditions in the Nordic Countries”, which was carried out in cooperation with researchers in Denmark, Finland and Norway and funded by The Councils for Research in Humanities and Social Sciences (NOS-HS). More information.

Dr. Myrvold has also been involved in organising a number of workshops/conferences on Sikh and Punjab Studies at Lund University, the first in March 2005 (more information), the second in 2008, and then a full-scale three-day conference on ”Sikhs in Europe. Migration, Identity and Translocal Practices” on 16–18 June 2010. More information on the 2008 and 2010 workshops.
As a result of these workshops, a network entitled Sikhs-in-Europe was formed for the purpose of developing closer academic cooperation between students and researchers with a common interest in the Sikhs and Sikhism in Europe. Go for the Sikhs in Europe network website.
On June 18 to 19, 2013, Kristina Myrvold organized yet another international conference at Lund University with the title ”Young Sikhs in a Global World: Negotiating Identity, Tradition and Authority”. The workshops and conferences have resulted in three anthologies on the Sikhs that have been co-edited by Knut A. Jacobsen at University of Bergen: Sikhs in Europe: Migration, Identities and Representations (Ashgate, 2011); Sikhs Across Borders: Transnational Practices of European Sikhs (Bloomsbury, 2012); and Young Sikhs in a Global World: Negotiating Traditions, Identities and Authorities(Ashgate, 2015). 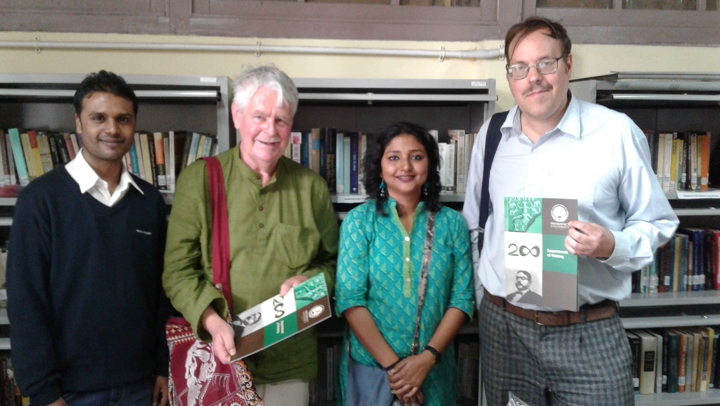 In March 2013, NCI organised a workshop in Bangalore on Urbanization and Migration in Transnational India along with SASNET and the Institute for Social and Economic Change (ISEC). Kristina Myrvold was the main planner for this workshop, entitled “Urbanization and Migration in Transnational India: Work and Family Life from a Welfare Perspective”. The purpose of the workshop was to bring together Nordic and Indian researchers in the Humanities and Social Sciences to identify new areas of research on the ways in which work and family life in India are rapidly being transformed by urbanization, national and transnational migration, and new economic policies, especially with regard to welfare distribution and social security. Read more.

PhD Candidate Andreas Johansson is working on a dissertation project entitled ”The Construction of Religio-Nationalism – The struggle for religious minority organizations” (preliminary title). He is being supervised by Prof. Olle Qvarnström at the Department of History and Anthropology of Religion, Centre for Theology and Religious Studies, Lund University, and Andreas is also affiliated to this department.
Before joining as a PhD student in 2009, Andreas completed a Masters programme in Islamology. His main research interest has been Political Islam in South Asia; how Muslim parties use Islamic rhetoric; and the influence of Sayyid Abu’-A’la Mawdudi on Muslim parties in South Asia. In November 2006 Andreas carried out a field work in Sri Lanka to study the main Muslim party in the country, Sri Lanka Muslim Congress. His Masters thesis in the Fall 2007 was entitled ”A Third Way. The Sri Lanka Muslim Congress discourse struggle between Islamism and Nationalism”. More information about Andreas Johansson’s research. 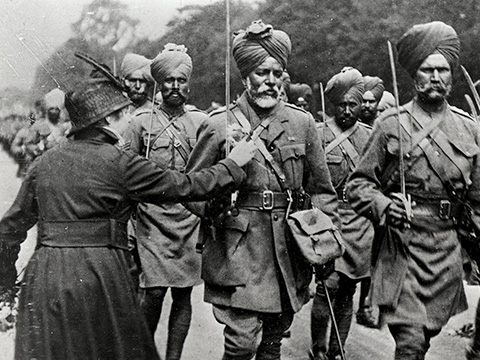 On 2 June 2014, the Crafoord Foundation granted Kristina Myrvold SEK 1 m for a research project entiled ”Religion in the Trenches: Miniature Scriptures for Muslim and Sikh Soldiers in the British Army during World War I” for the period 2015-2017. At the outbreak of World War I in 1914, one third of the British forces on the Western front were Indians of the British Indian Army. The purpose of the project is to investigate the importance of religion in the context of war and especially the production, distribution, and use of scriptures and religious artefacts for Muslim and Sikh soldiers from the province of Punjab. In order to maintain military discipline and nurture the soldiers’ religious contentment the Indian soldiers were given editions of the Quran and the Granth that could easily be carried into the battlefield. The project will map out the organization, interests, and motivations behind the provision of scriptures and other religious artefacts to the Indian soldiers. The project leader is Kristina Myrvold and the grant from the Crafoord Foundation is for a postdoctoral project on Muslim soldiers that will be carried out by Andreas Johanssson. From a shared theoretical and methodological framework they will conduct archival work in the UK and India.

On 30 October 2014, Kristina Myrvold was also awarded a project grant from the Swedish Research Council (total amount SEK 2.59 m in three years, 2015-17) for the same project (”Religion in the Trenches: Miniature Scriptures for Muslim and Sikh Soldiers in the British Army during World War I”).
Project abstract: The research project investigates the production, distribution, and use of religious miniature scriptures and artefacts for Sikh soldiers from the province of Punjab in India who fought for the British Army at the Western front during World War I. In order to meet the soldiers´ religious needs when they were dispatched to the trenches in Europe, the colonial power provided miniature editions of the Sikh scripture, Guru Granth, and small religious artefacts that could easily be carried into the battlefield. The miniature scriptures, measuring only a few centimeters in size, are today popular collectibles that enclose a largely unexplored history about the importance of religious books in the time of war. Based on new archival research and sources, the project examines the organization and motivations behind the provision of miniature scriptures and symbols intended for Sikh soldiers. By anchoring the research project in Military History, Book History, and Religious Studies, it explores how the religious objects and their practices manifested complex relationships across borders in a historical context when the British national security was threatened. From the theoretical perspective of material religion and how materiality of religious books and objects can be attributed diverse and multiple functions, uses and powers, the project focuses on the tiniest versions of the Sikh scripture and symbols and how they came to influence British and Indian relations during World War I. More information about Swedish Research Council grants to South Asia related projects 2014.